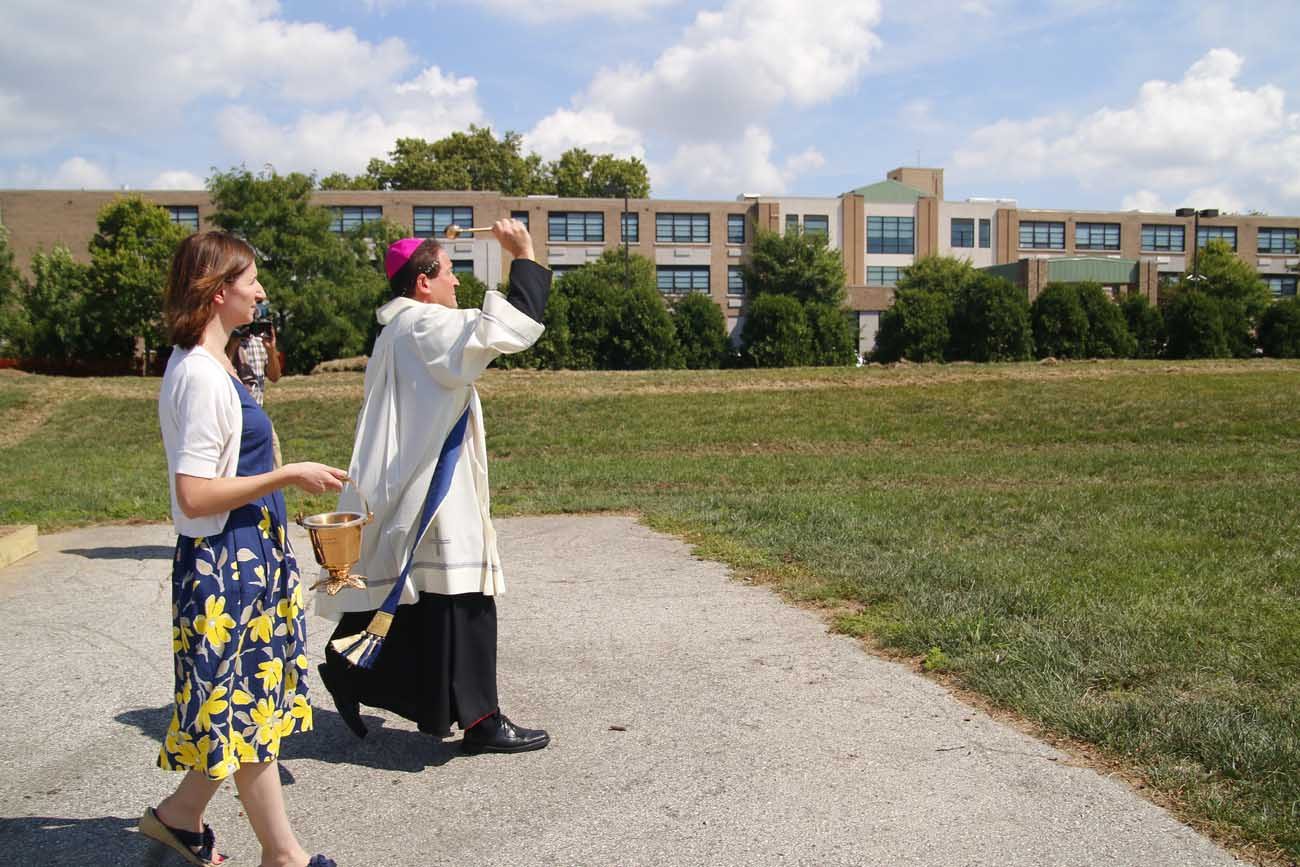 Auxiliary Bishop John McIntyre blesses the ground broken for St. John Neumann Place, the second phase of a senior housing project of the Archdiocese of Philadelphia expected to be completed by fall of 2017. Heather Huot of Catholic Health Care Services assists. (Photo by Sarah Webb)

The formal groundbreaking for St. John Neumann Place II, which will provide 52 units of affordable subsidized housing for eligible seniors 62 years of age and older in South Philadelphia, took place on Aug. 9 in the presence of archdiocesan officials, federal, state and local officials as well as satisfied residents of the adjoining 75-unit St. John Neumann Center, which opened in 2008.

(See a photo gallery of the groundbreaking and blessing ceremony here.)

The new $15 million facility will also include a Wellness Center that can be utilized by income-qualified seniors from the surrounding neighborhood.

“This completion on this campus is the culmination of a vision that began over a decade ago,” said John Wagner, deputy secretary and chief executive officer of archdiocesan Catholic Health Care Services.

“This community wanted this space to be vital to the fabric of the neighborhood. With the help of many people this vision has become a reality.”

Typical of such projects, St. John Neumann II, which is scheduled for opening in the fall of 2017, will consist of one-bedroom apartments complete with private bath and an open-floor living, dining and kitchen area. Usually they are single occupants although in some cases there may be couples.

Auxiliary Bishop John McIntyre, who presided at the ground breaking and blessing ceremony, said, “We do God’s heart some good, we cause him to rejoice because we have responded to his word to us, his command to us to be a light shining in the darkness.”

St. John Neumann Place II “will stand on this property as a testament to the church’s commitment to our beloved seniors,” he said. ”Many individuals and groups have labored to see this day of groundbreaking become a reality.”

Most of the funding for the project came through a $12 million tax credit allocation by the Pennsylvania Housing Finance Agency along with additional funding from the Archdiocese of Philadelphia and other entities.

Philadelphia Councilman Kenyatta Johnson, whose South Philadelphia district includes the St. John Neumann campus, said, “If we can find ways in this city to support tax abatements for $500,000 houses surely we can find resources to make sure that we have senior development projects situated at St. John Neumann and other places in the city. It is a moral mission to provide housing resources for those in need in our population.”

Among those at the ceremony were Mary Poiesz, an eight-year resident at St. John Neumann Place and formerly a member of nearby but now-closed St. Aloysius Parish, along with Dolly Greenleaf and Mae Henry who are more recent arrivals.

“We love it; it’s a beautiful home and a pleasant home,” Greenleaf said.

That all three are women is not surprising, since most residents of such facilities tend to be women, if for no other reason than women live longer than men.

Probably the first Catholic facility for the aged in the area was St. Ann’s Widows’ Asylum established in 1849, which continued well into the 20th century. Along with many other similar facilities, today the most notable of those are conducted by the Little Sisters of the Poor (Holy Family Home in Southwest Philadelphia) and other religious congregations.

Subsidized independent senior housing communities such as St. John Neumann Place are a relatively recent innovation. Those under the auspices of archdiocesan Catholic Health Care Services also include Nativity B.V.M. Place in Port Richmond with 63 units; St. Francis Villa in East Kensington with 40 units and in the planning stages St. Rita of Cascia in South Philadelphia.

“It’s exhilarating to watch the growth of this program,” said James Amato, archdiocesan Secretary for Catholic Human Services. “It’s a tribute to commitment through the work of the church and the work of the community.”

NEXT: Hispanics eager for service of new auxiliary bishop of Philadelphia