Hispanics eager for service of new auxiliary bishop of Philadelphia 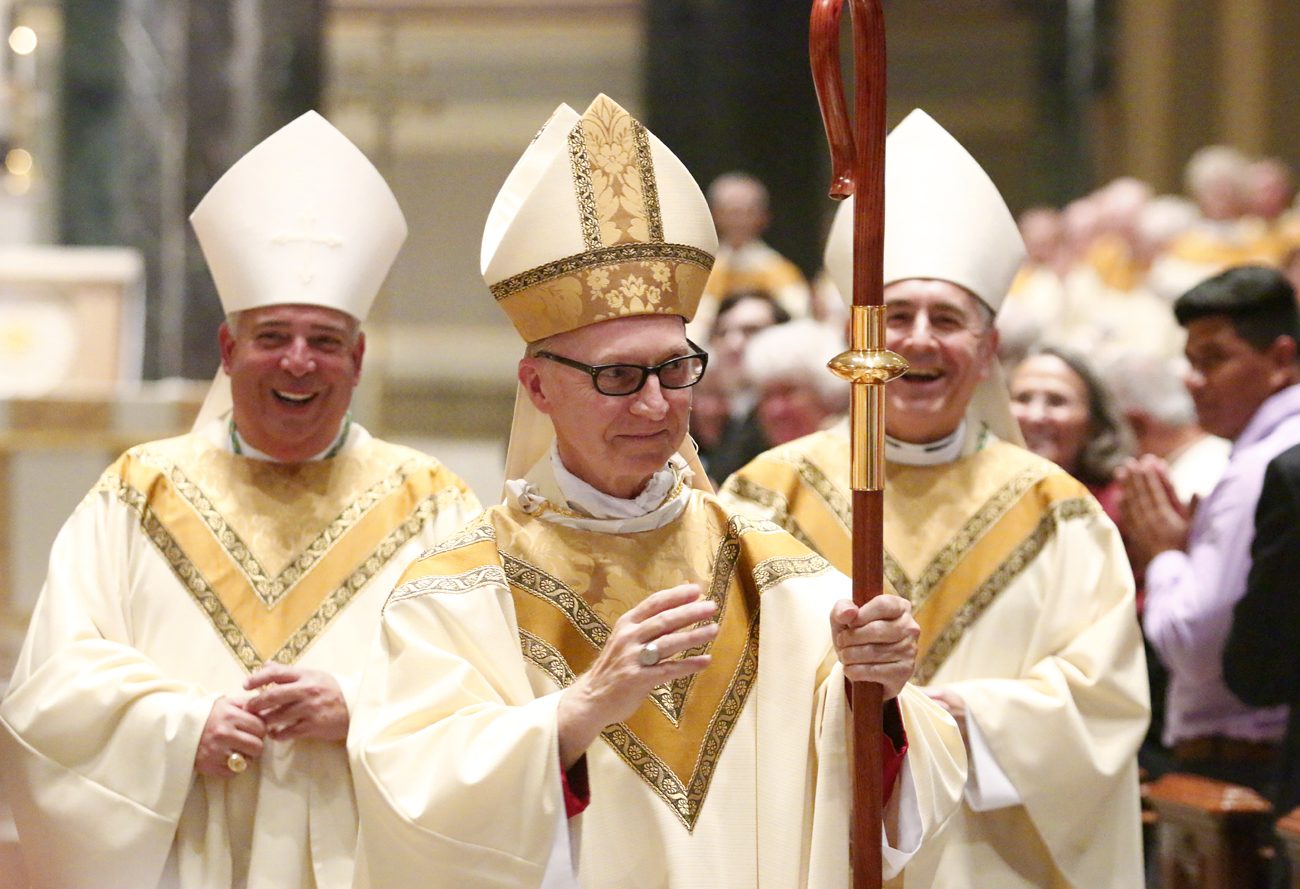 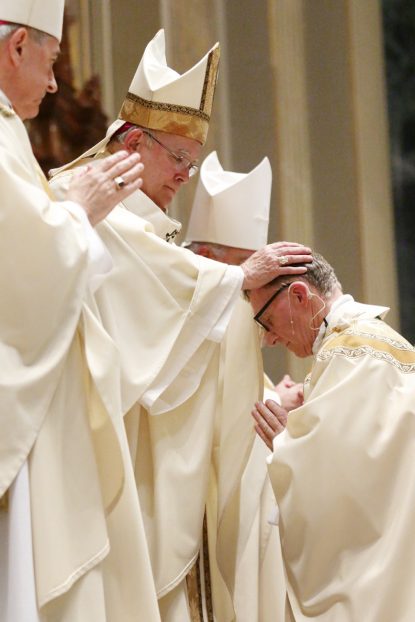 A Philadelphia priest who has ministered for most of his 43 years of priesthood in Hispanic Catholic communities has become the Archdiocese of Philadelphia’s newest auxiliary bishop.

(See an extensive photo gallery from the ordination in our Photo Features section.)

The approximately 1,500 worshipers included priests who filled about three-quarters of the cathedral’s left side of pews, plus many permanent deacons and religious, but mostly lay people of every age and walk of life.

They represented the wide ethnic diversity of parishes served by Bishop Deliman, parishes punctuated by a strong Hispanic Catholic presence. Those parishioners formed a loving bond over the years with the bishop, who although of Slovak descent speaks fluent Spanish.

His broad pastoral experience spans city and suburban parishes including St. Charles Borromeo Parish in Bensalem where Bishop Deliman remains pastor. Like many parishes, it serves both English-speaking and Spanish-speaking parishioners, especially after the predominantly Latino Our Lady of Fatima Parish merged with St. Charles in 2014.

Archbishop Chaput said one of the reasons Bishop Deliman’s name was suggested to Pope Francis as a possible new auxiliary bishop was to address the need to better serve the large Hispanic Catholic community in the archdiocese, which is also growing quickly throughout the United States.

Masses are celebrated in Spanish in 39 Catholic churches among the 219 parishes in the Philadelphia Archdiocese. The church, according to 2015 statistics from the archdiocesan Office for Parish Service and Support, is serving 253,176 Hispanic Catholics in a total Catholic population in the archdiocese of 1,438,147.

Bishop Deliman’s extensive pastoral experience among Hispanics has earned their admiration, and now his high-level position in the archdiocesan administration gives the Hispanic Catholic community an unprecedented voice at that level.

“He is a blessing for us Spanish people,” said St. Charles parishioner Ernesto Alvarado, attending the Mass with his wife Carmen and daughter Monica. “We have fulfilled our dream. We always wanted to have a representative.”

Archbishop Chaput served as co-consecrator of Bishop Deliman along with Harrisburg Bishop Ronald Gainer, a classmate while studying at St. Charles Seminary, as well as a former priest of Philadelphia and now an auxiliary bishop of the Rockville Center Diocese on Long Island, N.Y., Bishop Nelson Perez.

The ornate liturgy carried a grand air with the 40-member Archdiocesan Choir in the cathedral’s loft, led by director Brandon Motz and joined by organist Zach Hemenway and several musicians, as well as cantors Charlene Angelini and Marcelle Fletcher.

Archbishop Chaput consecrated Bishop Deliman by pouring the oil of sacred chrism on his head, investing him with his episcopal ring, mitre and crozier – the ceremonial staff of a shepherd – and laying hands on his head, as did the other bishops in turn.

In his homily, Archbishop Chaput recalled the story of a psychiatrist treating patients who were in a catatonic and unresponsive state. The custom had been for patients and doctor to remain separate, but the psychiatrist moved his bed into the ward and lived with them. He also wrapped his arms around the patients and hugged them.

“This highly skilled, highly paid physician held these unattractive and sometimes incontinent persons, and loved them back to life,” the archbishop said. “This process of becoming one with those in great need is what God wants for us through the incarnation and the life and ministry of Jesus. And what God has done for us through Jesus is the pattern for those who treat people through the sacrament of holy orders,” including the order of bishops.

Archbishop Chaput made reference to Bishop Deliman’s titular see, Sufes in modern-day Tunisia, which no longer exists as a diocese. Pagans, he said, martyred early Christians there for closing a temple to Hercules. And Catholic bishops competed with the teachings of heretical Donatist bishops.

Later the city was overrun during the seventh century conquest by Muslims, who made it difficult for Christians to practice their faith and “eventually they gave up their faith,” the archbishop said.

“Our times are different but they are not completely dissimilar,” he said, noting that bishops today must preach the Gospel while competing with “the bishops of secularism.” It is also a time of martyrs, not only for people in the Middle East but also “there are those in our country who suffer from local opposition to what the church teaches.”

It is a “complex and difficult ministry” for a bishop today, said the archbishop, but Bishop Deliman will be “surrounded with love and support” by his brother bishops, priests, deacons, religious and lay faithful.

Because pages of his printed homily surprisingly were missing from his folder, Archbishop Chaput improvised the remainder of his talk and drew attention to the need for ministry to Hispanic Catholics in the Philadelphia Archdiocese.

“While there are many needs in the archdiocese, there is a special need for the Hispanic community,” he said. “Many of them are newly arrived and many of them struggle day to day to hear the Gospel spoken to them in English.

“It’s a great blessing to have you as an auxiliary bishop,” the archbishop told Bishop Deliman, and pledged to work hard with him in the Hispanic apostolate “because we have a lot to do, a lot to accomplish. Together, we will give glory to God.”

After the rites or episcopal ordination and the Liturgy of the Eucharist that was concelebrated by the retired Archbishop of Philadelphia, Cardinal Justin Rigali, and other bishops including Bishop Deliman, he walked a friendly path throughout the cathedral’s aisles, shaking hands and smiling broadly as Bishops Perez and Gainer accompanied him.

He then offered remarks first in Spanish and then in English. In them, he thanked his elderly mother, two brothers and extended family in attendance. He thanked his brother priests, especially the class of 1973 whom he called “a real collection of personalities, but God is still good to us. We are instruments in the hands of the Lord.”

The bishop thanked all the visitors who traveled to the cathedral for the ordination.

“I am truly humbled by the many sacrifices you have made,” he said. “To our many religious – and there are many – to our deacons to our seminarians, the people of God, my parishioners of St. Charles Borromeo Parish that now includes the parish of Our Lady of Fatima, thank you all very much. I love you all. God bless you.”

St. Charles Parish may offer a glimpse into the work Bishop Deliman will soon begin as bishop. The merger two years ago of primarily Latino Our Lady of Fatima’s community with the mostly Anglo St. Charles parishioners might have become divisive if not acrimonious, but parishioners say the transition went smoothly.

“Where he took us, we followed,” said Ernesto Alvarado. “There was nothing negative.”

Today the Fatima Center manages social outreach and other programs geared toward Hispanics in the lower Bucks County area, and Our Lady of Fatima Church hosts a Mass in Spanish on Saturday evenings at 7 p.m.

Fellow parishioner Sarah Roberto said her pastor is “one of the best (gifts) for this diocese” because he has “great leadership skills.” While he is not above delegating some tasks, “he is not above the people, he is with the people. He is always ready to help and give guidance,” Roberto said.

Bishop Deliman’s ordination, and his hoped-for advocacy of Hispanic Catholic concerns, “is a blessing,” added Alvarado. 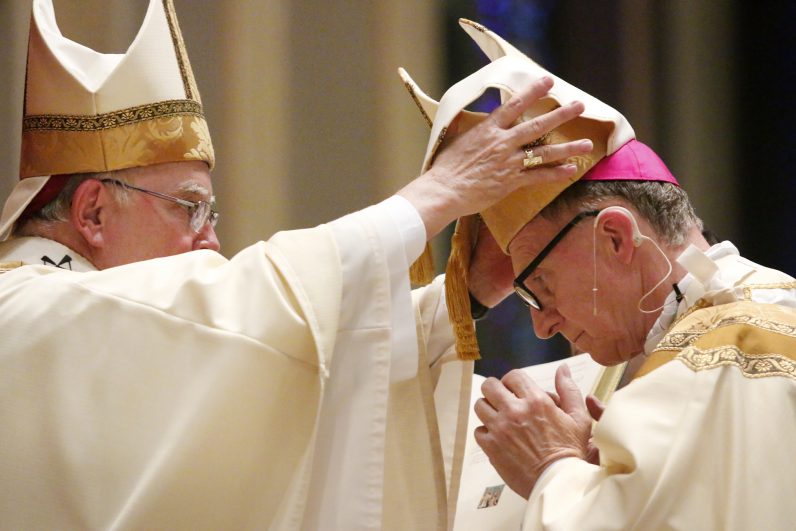 Archbishop Charles Chaput places the mitre — one of the three insignia of a bishop along with the ring and crozier — on the head of Auxiliary Bishop Edward Deliman Aug. 18 in the Cathedral Basilica of SS. Peter and Paul. (Sarah Webb)

NEXT: Three churches in Philadelphia Archdiocese will formally close