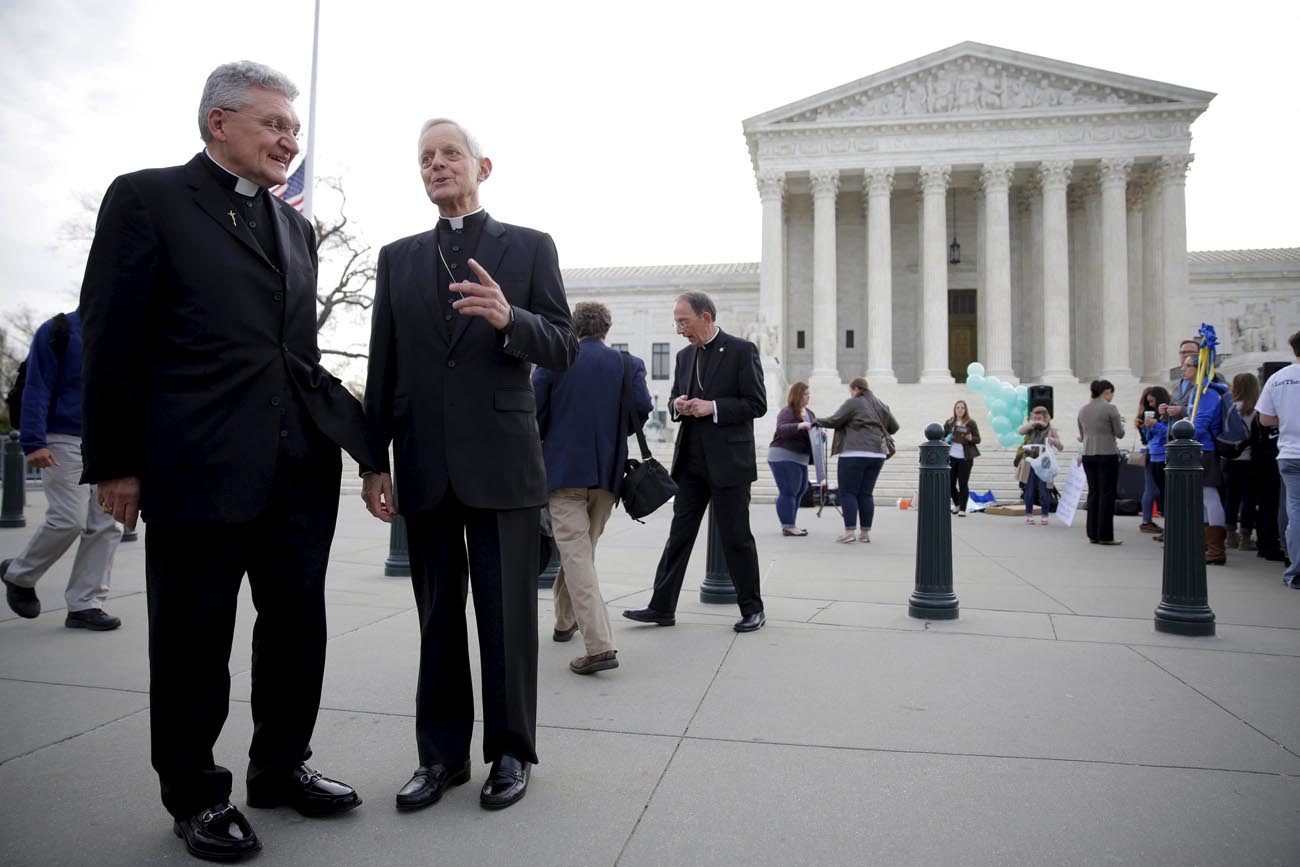 Bishop David A. Zubik of Pittsburgh and Cardinal Donald W. Wuerl of Washington are seen near the U.S. Supreme Court in Washington March 23. In its May 16 decision in the Zubik v. Burwell contraceptive mandate case, the high court asked the government and the plaintiffs to work out a solution to providing contraceptives to employees without violating religious employers' moral objections to such coverage. (CNS photo/Joshua Roberts, Reuters)

PITTSBURGH (CNS) — The Pittsburgh Diocese said Bishop David A. Zubik is making every effort to achieve a swift negotiated solution to the diocese’s dispute with the federal government over religious freedom in relation to the federal contraceptive mandate, as directed by the U.S. Supreme Court.

“We have always been willing to meet with representatives of the government to negotiate a mutually agreeable solution to our impasse over religious freedom,” said a diocesan statement issued Aug. 10.

In a May 16 unanimous decision in Zubik v. Burwell, a consolidated case of challenges to the contraceptive mandate filed by several Catholic and other religious entities, the Supreme Court sent the case back to lower courts, vacated earlier judgments against those parties opposing the mandate, and encouraged the plaintiffs and the federal government to resolve their differences.

Zubik v. Burwell involves the Little Sisters of the Poor, Priests for Life, the Pennsylvania dioceses of Pittsburgh and Erie, the Archdiocese of Washington, and other Catholic and faith-based entities challenging the Affordable Care Act’s mandate that most religious and other employers must cover contraceptives, sterilization and abortifacients through employer-provided health insurance — even if the employers oppose the coverage on moral grounds. They see the mandate, issued by the Department of Health and Human Services, as a violation of their religious freedom.

“Zubik” in the case name is Bishop Zubik, and “Burwell” is HHS Secretary Sylvia Mathews Burwell.

The plaintiffs, who do not fit the narrow exemption to the contraceptive mandate the government gives to churches, argue that providing contraceptive coverage even indirectly through a third party, as the Obama administration allows through what it calls an accommodation, still violates their religious beliefs.

The government argues its existing opt-out provision for these employers does not burden their free exercise of religion.

“Our counsel and counsel for the other Supreme Court litigants had a meeting with representatives of the Department of Justice, at which we attempted to engage in the kind of resolution talks that the Supreme Court intended in its order,” the Pittsburgh Diocese said in its statement. “The government has been slow to offer anything of substance to pursue a negotiated solution, except to mention openness to future meetings.”

Bishop Zubik initiated the lawsuit against the government on behalf of Catholic Charities of Pittsburgh, arguing that it is a violation of religious freedom to force a religious organization to facilitate access to anything that it teaches is immoral.

After Bishop Zubik won an initial victory in the U.S. District Court in Pittsburgh in November 2013, the case was appealed until it reached the Supreme Court this year.

In its May decision, the high courts urged the lower courts to give the litigants time to find a negotiated solution. The high court also affirmed that the diocese and the others could not be fined during those negotiations.

However, the diocese has learned that the Department of Justice is pressuring secular insurance companies that have contracts with the diocese, and with other religious organizations, to begin providing church employees with the objectionable coverage.

Those companies have told the diocese that they recently received letters from the Department of Justice directing them to provide the disputed coverage at their own expense, said Christopher Ponticello, general counsel of the Diocese of Pittsburgh.

“Since the Supreme Court issued its ruling strongly directing that the parties negotiate a mutually agreeable resolution to this matter, we have remained hopeful and open to those talks,” Ponticello told the Pittsburgh Catholic diocesan newspaper.

“It is discouraging to see this aggressive action taken by the government,” he said. “We hope to prevail upon the Department of Justice to stop this latest action without having to pursue additional litigation. We have believed from the beginning that an agreement could be reached that would allow the government to accomplish its goals without involving the church in the process.”

The diocese has not paid anything for its legal representation in Zubik v. Burwell. All costs associated with the litigation have been donated by the legal firm of Jones Day.

Mickey Pohl, one of the Jones Day attorneys who has been representing Bishop Zubik, the diocese, Catholic Charities and other religious organizations in this litigation, said: “It is extremely disappointing that the Department of Justice is trying to pressure insurers to steamroll the religious objections of Catholics and other people of faith who have been part of this litigation. It is also troublesome that these assaults on freedom of religion have not been the subject of inquiry by the mainstream media during this election cycle.”

The Aug. 10 statement from the diocese said that “we are aware that the government has made an extremely aggressive interpretation of the court’s order in the Zubik case and is apparently trying to take over — to force our third-party administrators to include the objectionable coverage in our self-insured plans.”

“We think that is an erroneous reading of what the Supreme Court said,” it continued. “Furthermore, as the government seems to acknowledge, because we are self-insured there is no obligation or authority for the third-party administrator to provide the objectionable coverage.”

If the fines for not facilitating the coverage were imposed, Ponticello said, they would bankrupt Catholic Charities of Pittsburgh. Each year that agency provides about $10 million in services, such as free medical and dental care, and support to homeless women and veterans, to people of all faiths in southwestern Pennsylvania.

“The Supreme Court also made clear that we cannot be fined or penalized for refusing to comply with the government’s current regulations,” the statement said. “Therefore, we believe the government’s position is wrong. In order to avoid future litigation, we will try to work through these issues with our insurers, third-party administrators and the government. Our counsel is actively working on this endeavor, and we remain in prayer for a mutually agreeable solution.”

In late July, the Obama administration opened a public-comment period seeking input on ways the government can comply with religious employers’ refusal on moral grounds to cover contraceptives for employees and at the same time make sure those employees get such coverage.

Rodgers is general manager of the Pittsburgh Catholic, newspaper of the Diocese of Pittsburgh.

PREVIOUS: A violent summer pushes U.S. to once again deal with lingering pain of racism