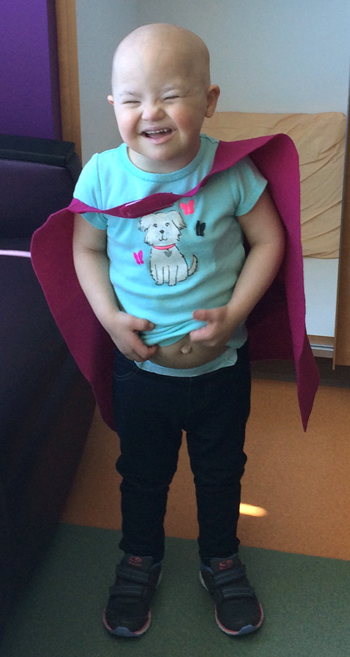 BATON ROUGE, La. (CNS) — At almost 4 years old, Caroline Hoffman is battling something no child should ever have to worry about: cancer.

Diagnosed with acute myeloid leukemia, Caroline, who lives in Virginia, has endured many months of treatments at Our Lady of the Lake Children’s Hospital in Baton Rouge.

But while her extended hospital stays and doctor visits were all consuming, Caroline still found time to be a little girl, especially when she received something special from relatives in Baton Rouge — a pint-size hot pink superhero cape with a bright blue crown sewn squarely in the middle.

It was something her mom, Suzette, called a “bright spot during her treatment.”

“We already thought she was a superhero and the cape was the perfect touch,” Suzette told The Catholic Commentator, newspaper of the Baton Rouge Diocese.

Caroline’s superhero cape was one of 79 crafted by eighth-graders at Sacred Heart of Jesus School in Baton Rouge.

Incorporated as part of an eighth-grade religion project aimed at reflecting the corporal works of mercy, the capes were created by the students and then donated to children in need.

“We wanted our focus to celebrate the courage of those who are chronically ill,” said Elizabeth Jones, a Sacred Heart religion teacher.

Jones said her students jumped on the idea of creating superhero capes after she shared the story of a woman working on a similar project in the Midwest.

“Truth be told, I read the article and cried liked an infant. I thought there had to be a way to work through the (school’s eighth-grade) ambassador program or our religion class to support this mission,” Jones said.

As her eighth-grade students took ownership of the project, Jones said their ideas quickly morphed into an understanding of the type of courage and strength it takes for children who are affected with cancer or other debilitating illnesses.

For student Faith Woods, the project allowed her to connect with something she learned from her mom.

“My mom’s a physician, and hearing her talk about the things she has to see people deal with has always impacted me. Being able to help people my age or even younger was so amazing,” she said.

Students were allowed to use their own creativity in crafting the capes, which featured designs from the traditional comic book heroes, like Superman and the Green Lantern, to Disney favorites, such as Stitch and Monsters Inc.

The students, however, didn’t stop at typical comic legends. They also used everyday objects and animals, including snowflakes, lightning bolts, dogs, cats and even a superhero cow; anything that would make a child smile.

“Something as simple as a flower can make you happy,” said Woods.

“I was able to embrace my inner 6-year-old and put all of my crazy little childish thoughts on this cape and make someone else’s day,” she said.

Dr. Jewel Crockett, a Baton Rouge internal medicine doctor, who accepted half of the completed capes for Our Lady of the Lake Children’s Hospital, wrote in a note to the students that their project had an immediate impact, especially for a young patient visiting the hospital’s playroom for the first time.

Jones said it was important for her students to understand how far-reaching their simple acts can be.

She said the project was student-run but also given support by teachers, parents and parishioners.

“We were trying to use super glue (to attach the designs to each cape), and we realized that it just didn’t work,” said student Abby Ligon.

A teacher and some moms came to the rescue by hand-sewing designs onto each cape.

“There was so much support,” said Jones, who added she would like to see the project continue for next year, even offering her assistance to other schools interested in replicating it.

Jones’ eighth-grade students, who are now recent graduates of Sacred Heart School and preparing for high school, agree it is a project worth repeating for many reasons.

“When you’re sick, you’re not the happiest person,” said student Kelvin Givens, adding, “To raise someone’s spirit is the greatest feeling in the world.”

Caroline Hoffman is proof that each super cape has its own special power to lift a person’s spirit.

Her mom said that when Caroline received her cape, she “would run up and down the halls” with it.

Today, Caroline, who recently completed her treatments, is catching up on all of the things she missed with her family.

“We are currently at the beach,” said Suzette Hoffman, adding that Caroline’s “prognosis is great.”

Smith is a staff writer at The Catholic Commentator, newspaper of the Diocese of Baton Rouge.

NEXT: Slain French priest was attack on ‘all of us,’ English imam says