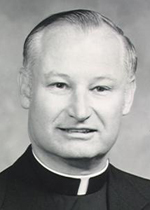 He was ordained May 11, 1957 by Archbishop John F. O’Hara at the Cathedral of SS. Peter and Paul, with his initial assignment as a parochial vicar at St. Jerome Parish, Tamaqua.

He then served on the faculty of Cardinal Dougherty High School and later pursued a doctoral degree in canon law at the Catholic University of America.

“He was highly respected, an intense man who worked very hard,” said Francis Beatty, who was the treasurer for the archdiocese working under Msgr. Nace. “He was very good to priests who had financial difficulties in their parishes or assignments. He was also very good at the bedside of the dying and available to people.”

Msgr. Francis Schmidt, who was one of Msgr. Nace’s classmates at St. Charles, also remembers his willingness to help whenever he could. At one point when Msgr. Schmidt, who was director of the Catholic Youth Office for the archdiocese, was experiencing a budget shortfall, he went to Msgr. Nace explaining the situation but not expecting an immediate remedy. “He wrote a check to cover it,” Msgr. Schmidt remembers.

While Msgr. Nace was a capable administrator, his heart was in direct ministry and in 1980 he requested reassignment. He then served as chaplain at Sacred Heart Hospital until his 1991 retirement. Afterwards he did parish ministry in Florida before finally returning to the Philadelphia area.

Father Michael Murphy, pastor of St. Dorothy Parish in Drexel Hill, first came in contact with Msgr. Nace during his seminary years, when Msgr. Nace was in residence at Annunciation B.V.M. Parish, Havertown.

“He was always kind to me during my years of formation and was a concelebrant at my first Mass,” Father Murphy said. “I know that he was a compassionate man and he exercised his priestly role especially by ministry to the sick. I was told he would go anywhere at any time of day or night to comfort and minister to the sick.”

It was Msgr. Nace’s wish that his funeral be held at St. Dorothy Church, which had a family connection, with Father Murphy as the celebrant and homilist.

A viewing is scheduled for Aug. 17 beginning at 6 p.m.; his funeral Mass will be celebrated at St. Dorothy Church Thursday, Aug. 18 at 11 a.m.

Msgr. Nace is survived by his sisters, Madeleine Nace, Theresa Ryan and Patricia M. Campbell, and many nieces and nephews.