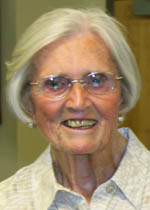 Sister Ruth McCarthy, who was a Sister of the Holy Child Jesus for 62 years, died Friday, Sept. 16 in Haverford. She was 92.

Sister Ruth dedicated her life to serving her congregation, her family, friends and students with unlimited energy and compassion. Joanne Sullivan, S.H.C.J., said her friend “never turned a person down. She had the capacity to lend a helping hand wherever needed.”

Following high school graduation, Sister Ruth earned a certificate in science from Rutgers University and then began working for pharmaceutical companies. In 1951, after six years in the workforce, she entered the Society of the Holy Child Jesus. She made her final vows in 1959 and became well known by her religious name Mother Louis Mary.

Sister Ruth’s teaching ministry in the Archdiocese of Philadelphia spanned 36 years. Her first ministry extended for 12 years at Holy Spirit School in Sharon Hill as a teacher and a principal.

She then spent one year teaching religion at John W. Hallahan Catholic Girls’ High School before going to Archbishop John Carroll High School. She joyfully taught there for 23 years – even organizing and enjoying ski trips with the students. For 19 of these years, she was a resident assistant at Rosemont College.

In 1990, Sister Ruth returned to her home state of New Jersey and opened a new Holy Child community at Cape May Court House. While living there she taught, first as a part-time teacher at Sacred Heart School in Vineland and later as a substitute teacher in Wildwood Catholic High School. For 25 years, Sister Ruth managed the sisters’ residences in Sea Isle City, Stone Harbor and Cape May Courthouse.

Officially retired in 2007, Sister Ruth returned to the Philadelphia area and generously shared her time making mission appeals and serving the needs of Sisters at Holy Child Center in Rosemont. She always provided good conversation and readily drove the sisters to various appointments and meetings.

A natural athlete, she is most likely the only Holy Child Sister who skied into her 70s.

Sister Ruth maintained life-long relationships with many people, including her former students at Archbishop Carroll and Holy Spirit School. For decades, she and the Holy Spirit alums gathered every year to celebrate their friendship.

She was the loving daughter of the late Florance James and Regina (nee Pilger) McCarthy. She was predeceased by her parents and siblings Robert and Eleanor. She is survived by a sister-in-law, Blanch; two nephews, Robert and James; and one niece, Kathleen.

Her funeral Mass will be celebrated Friday, Sept. 23 at 11 a.m. at New Sharon Chapel, 1341 Montgomery Avenue, Rosemont. Preceding Mass, friends and family are welcome to attend the viewing at 10 a.m.

NEXT: Sister Mary Dolores Malecka, teacher at high schools and college, dies at 85