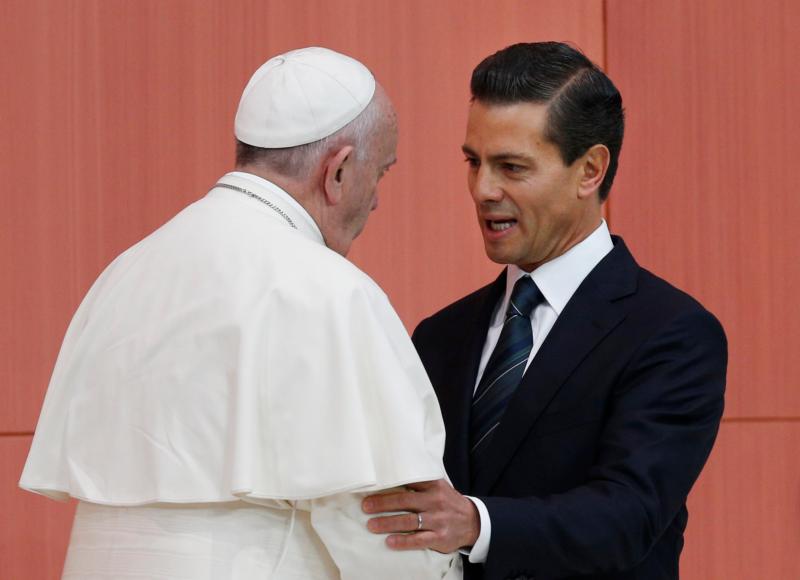 Pope Francis talks with Mexican President Enrique Pena Nieto during visit to Mexico City in early February. A Catholic university said Pena Nieto met the requirements for graduation with a law degree, while acknowledging parts of his 1991 thesis were plagiarized. (CNS photo/Paul Haring)

MEXICO CITY (CNS) — A Catholic university said the president of Mexico met the requirements for graduation with a law degree, while acknowledging parts of his 1991 thesis were plagiarized.

Universidad Panamericana in Mexico City issued a statement late Aug. 28, saying the thesis submitted by then-student Enrique Pena Nieto — elected president in 2012 — conformed with the standards of the time.

“The thesis introduced original ideas” and used outside ideas with and without citations, the statement said. “The (current) general regulations of our institution are not applicable to former students.”

Revelations of presidential plagiarism set off a scandal in Mexico, but also spurred accusations from some at the Opus Dei-run university of an ongoing bias against the president on the part of investigative journalists highlighting issues with the thesis. The journalists from Aristegui Noticias previously uncovered evidence of Pena Nieto’s wife, first lady Angelica Rivera, purchasing a property from a preferred government contractor.

An analysis of Pena Nieto’s thesis found 29 percent of the material had been plagiarized.

A statement from the Mexican president’s office denied any wrongdoing, while mentioning “stylistic” issues.

The thesis controversy caused an issue for the Universidad Panamericana, known for its business and law schools, both of which are well-regarded in surveys. Some observers said the school was risking its reputation, creating an impression of putting politics ahead of academics.

“The dismissive attitude toward the entire graduating process … that tells you a lot about standards at the place,” said Rodolfo Soriano-Nunez, a sociologist in Mexico City.

Others pointed to perceptions that Catholic education in Mexico often caters to the elites able to pay, while expensive private schools run by orders like Opus Dei and the Legionaries of Christ offer students the opportunity to befriend the children of influential families — important in a country where connections often trump talent — as much as an academic experience.

NEXT: When tragedy strikes, don’t turn God into a scapegoat, bishop says