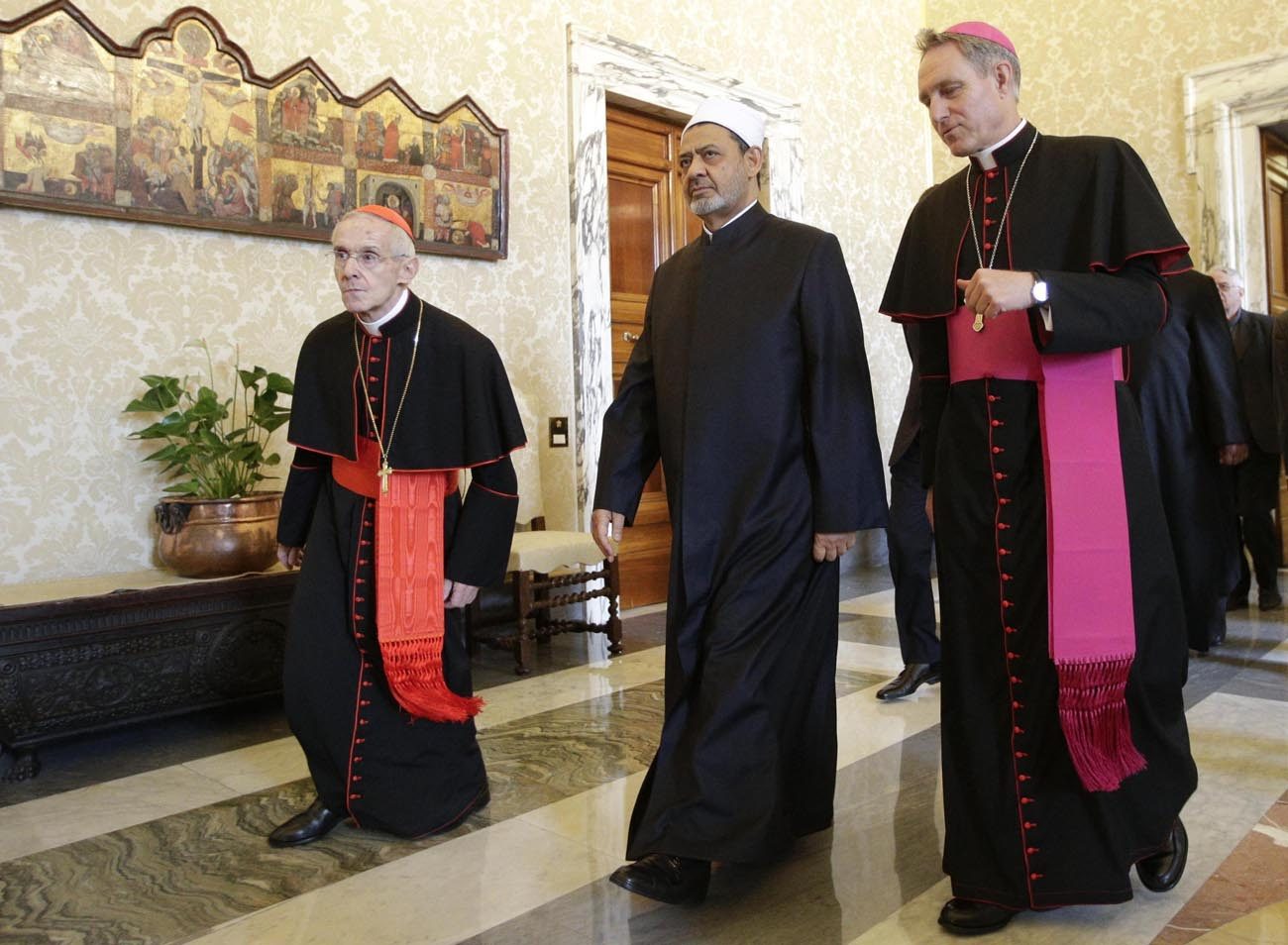 Cardinal Jean-Louis Tauran, left is seen Sheik Ahmad el-Tayeb, grand imam of al-Azhar mosque and university, and Archbishop Georg Gaenswein at the Vatican May 23. The French cardinal said terrorists want to make peace-loving Christians and Muslims believe that it is impossible for them to live side by side; it is up to Christians and Muslims to prove them wrong. (CNS photo/Reuters pool via EPA)

The cardinal, president of the Pontifical Council for Interreligious Dialogue, said he was in France July 26 when 85-year-old Father Jacques Hamel was brutally murdered in Saint-Etienne-du-Rouvray near Rouen. The Islamic State group later claimed responsibility for the murder.

Writing Aug. 12 in the Vatican newspaper, L’Osservatore Romano, Cardinal Tauran said, “Obviously, these crimes threaten the credibility of interreligious dialogue, but we must continue to meet, to speak and to work together when possible so hatred does not prevail.”

In a multicultural, multireligious society, ignorance breeds problems, he said. “In order to live together we must look at those who are different from us with esteem, friendly curiosity and a desire to walk together.”

When tensions arise or outrageous acts are perpetrated, the cardinal wrote, they must be studied as “providential lessons from which people must draw the necessary wisdom to open more reasonable and more courageous paths.”

As now-retired Pope Benedict XVI taught, he said, dialogue deepens only when both dialogue partners know and practice their own faith and are willing to try to explain it to the other.

“Dialogue cannot be based on ambiguity,” the cardinal said, so “an event like that of July 26, 2016, pushes us to deepen our spiritual life and nourish it with prayer and study.”

Christians and Muslims, he wrote, “can — rather, we must — work together and promote religious instruction,” especially in societies that appear to be trying to drive religious faith to the margins of social life.

“By killing Father Jacques, those who conceived of this despicable act had one precise goal: to demonstrate that peaceful coexistence among Muslims and Christians is impossible,” Cardinal Tauran said. “But we have demonstrated and we believe that we must join forces in the name of God to work together for harmony and unity in a spirit of sincerity and mutual trust.”

PREVIOUS: For pope, Mother Teresa is model of mercy at work, fueled by prayer

NEXT: On ‘Mercy Friday,’ pope visits women rescued from prostitution