Forgive others and find peace, pope says during brief visit to Assisi 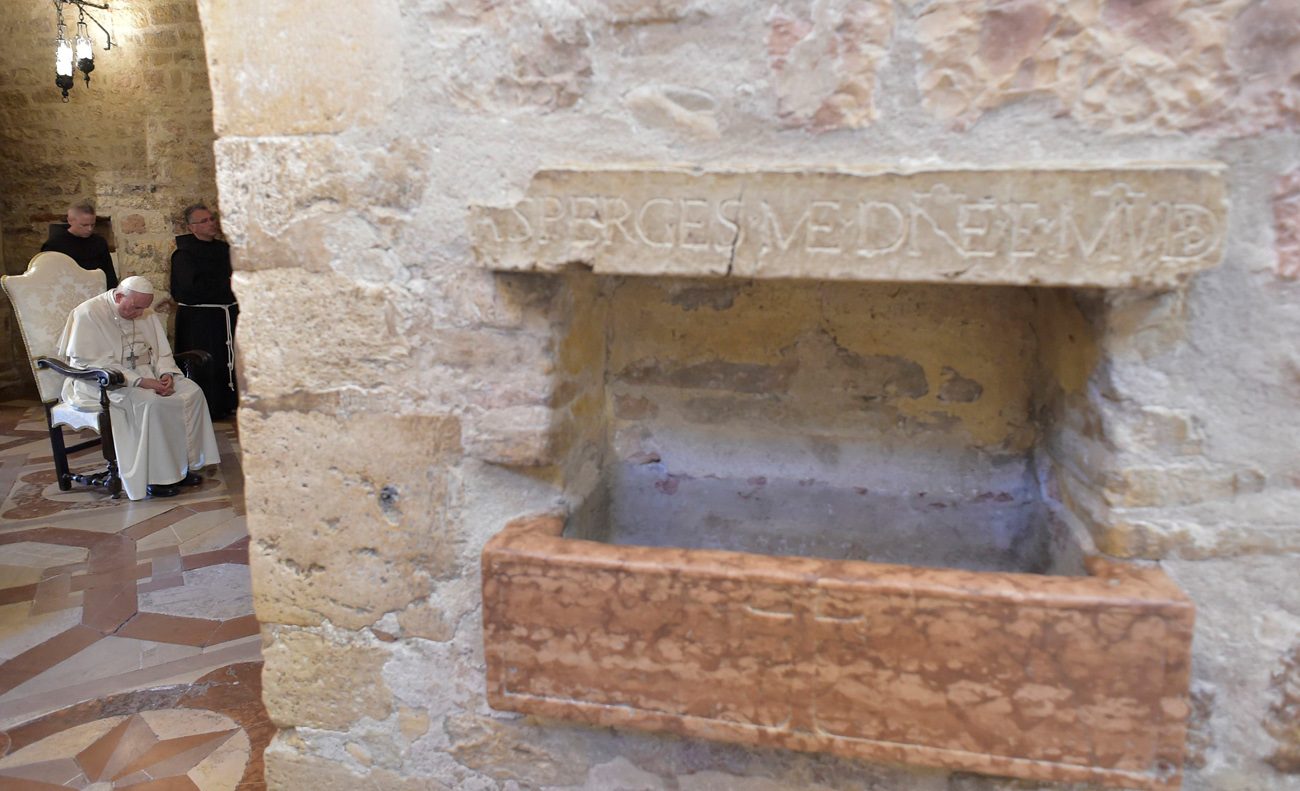 Pope Francis prays in the Portiuncola, the chapel inside the Basilica of St. Mary of the Angels, in Assisi, Italy, Aug. 4. (CNS photo/L'Osservatore Romano via Reuters) 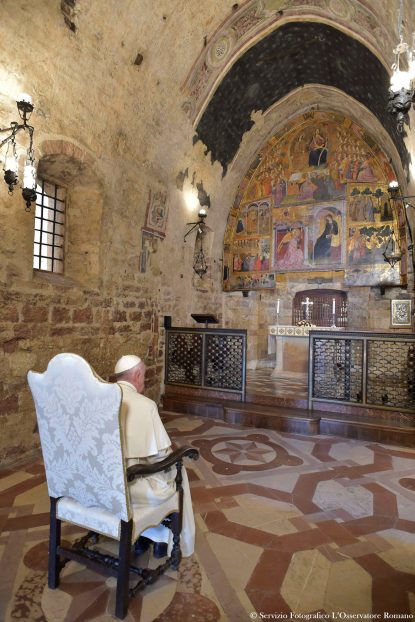 Pope Francis prays in the Portiuncola, the chapel inside the Basilica of St. Mary of the Angels, in Assisi, Italy, Aug. 4. (CNS photo/L’Osservatore Romano via Reuters)

ASSISI, Italy (CNS) — Celebrating how God’s mercy has been experienced for 800 years in a tiny stone church in Assisi, Pope Francis said people need to experience God’s forgiveness and start learning how to forgive others.

“Too many people are caught up in resentment and harbor hatred because they are incapable of forgiving. They ruin their own lives and the lives of those around them rather than finding the joy of serenity and peace,” the pope said Aug. 4 during an afternoon visit to the Basilica of St. Mary of the Angels.

Before speaking about the importance of confession and forgiveness, Pope Francis set a bouquet of red and white roses on the altar and prayed silently for 10 minutes in the Portiuncola, a stone chapel in the middle of the basilica.

The abandoned ninth-century Benedictine chapel was entrusted to St. Francis of Assisi in the early 1200s. When St. Francis felt God calling him to rebuild the church, he first thought he meant the little chapel.

St. Francis restored the chapel in 1207 and two years later he founded his religious order there. The chapel is so important to the Franciscan family that when it was time to build a larger church, the new basilica was built around the chapel, leaving it intact.

But the reason Pope Francis visited Aug. 4 and the reason thousands travel there each August is the “Pardon of Assisi,” a plenary indulgence offered to visitors who are sincerely sorry for their sins, go to confession, receive the Eucharist, recite the Creed and pray for the intentions of the pope as a sign of their unity with the church.

In Franciscan history, it was God who authorized St. Francis to offer the Assisi indulgence — a reduction of the punishment one rightly should endure because of sins committed. Kneeling in prayer, St. Francis asked the Lord to grant full pardon to those who came to the Portiuncola and confessed their sins. The Lord agreed. The next day — Aug. 2, 1216 — Pope Honorius III agreed.

Although it was not written in the pope’s prepared text or mentioned in the Vatican schedule for the visit, Pope Francis ended his talk in Assisi asking the Franciscan friars and bishops present to go to one of the confessionals and be available to offer the sacrament of reconciliation. He put on a purple stole and heard confessions before making his scheduled visit to Franciscans in the nearby infirmary.

Earlier, Pope Francis told those gathered before the Portiuncola that St. Francis could ask for nothing greater than “the gift of salvation, eternal life and unending joy” for the townsfolk of Assisi.

“Forgiveness — pardon — is surely our direct route to that place in heaven” that Jesus promised his followers, the pope said. “What a great gift the Lord has given us in teaching us to forgive and, in this way, to touch the Father’s mercy!” 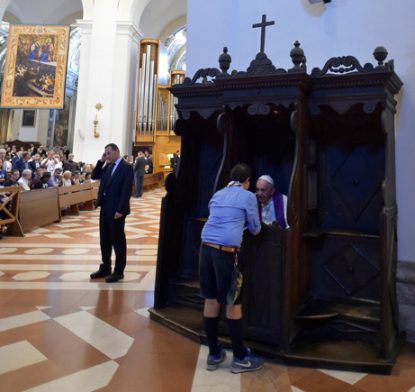 Pope Francis listens to a confession in the Basilica of St. Mary of the Angels Basilica in Assisi, Italy, Aug. 4. (CNS photo/L’Osservatore Romano via Reuters)

In his brief remarks, Pope Francis offered a reflection on the parable of “the unforgiving servant” from St. Matthew’s Gospel.

Like that servant, the pope said, many Christians feel they have a debt to God that they can never repay. “When we kneel before the priest in the confessional, we do exactly what that servant did. We say, ‘Lord, have patience with me.'”

And the Lord does, he said. Over and over again people confess the same sins and each time, God forgives them.

“The problem, unfortunately, comes whenever we have to deal with a brother or sister who has even slightly offended us,” Pope Francis said.

Again, many people act like the servant in the parable who, after pleading for leniency, goes to those who owe him and demand they pay immediately.

“Here we encounter all the drama of our human relationships,” the pope said. “When we are indebted to others, we expect mercy; but when others are indebted to us, we demand justice.

“This is a reaction unworthy of Christ’s disciples and is not the sign of a Christian style of life,” Pope Francis said. “Jesus teaches us to forgive and to do so without limit.”

God’s forgiveness is “like a caress,” he said, “so different from the gesture” of a threatening fist accompanied by the words, “You’ll pay for that!”

The pardon St. Francis preached at the Portiuncola, Pope Francis said, is as necessary as ever.

“In this Holy Year of Mercy, it becomes ever clearer that the path of forgiveness can truly renew the church and the world,” he said. “To offer today’s world the witness of mercy is a task from which none of us can feel exempt.”

NEXT: Innocent people pay the price for war in Syria, pope says at Angelus