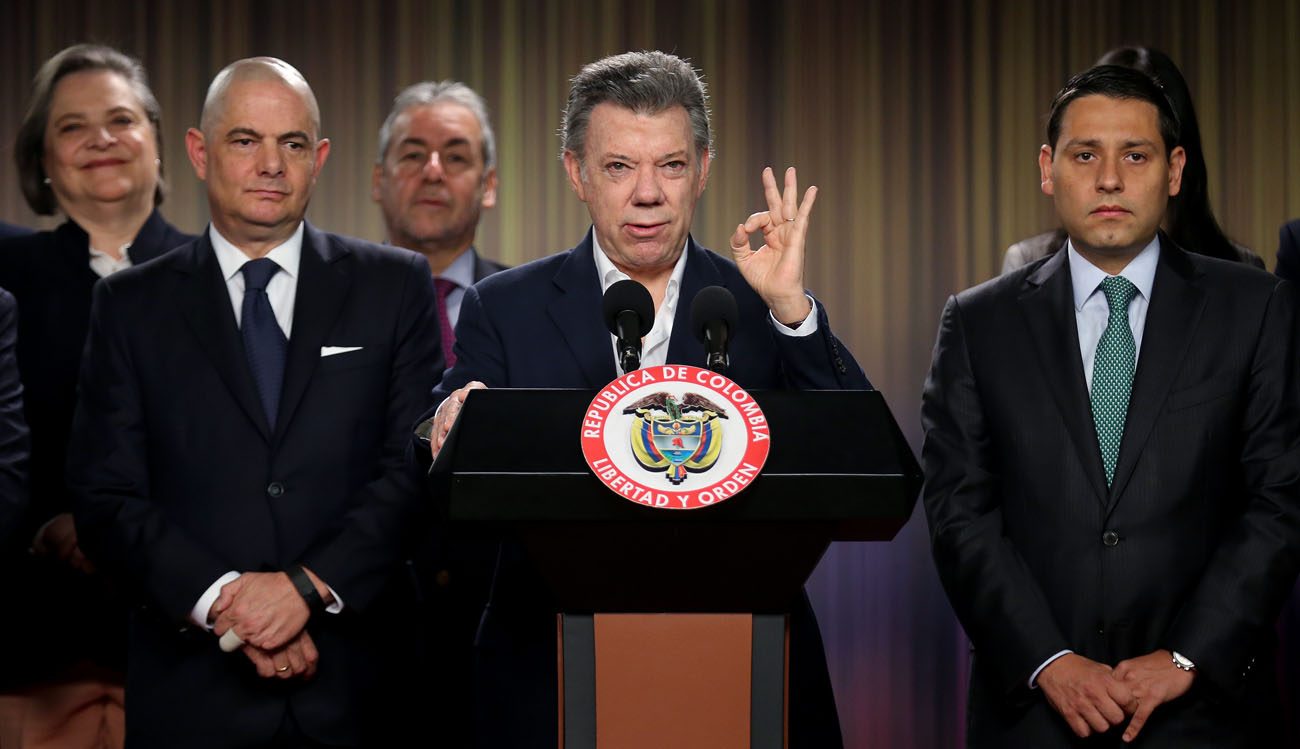 Colombian President Juan Manuel Santos gestures as he speaks Aug. 30 at the Palacio de Narino in Bogota, after he signed a document setting up a referendum on the peace agreement signed with the Revolutionary Armed Forces of Colombia, or FARC rebels. (CNS photo/Leonardo Munoz, EPA)

VATICAN CITY (CNS) — While hailing the peace agreement that marks the end of some 50 years of civil conflict in Colombia, Pope Francis declined an invitation to name a representative to help choose judges for what have been described as “peace tribunals.”

A communique from the Vatican Secretariat of State Aug. 31 said the pope was pleased by the peace agreement reached between the government and the Revolutionary Armed Forces of Colombia, known by the Spanish acronym FARC.

The accord went into effect Aug. 29, ending five decades of strife that claimed an estimated 220,000 lives. FARC and the Colombian government began the peace talks in Cuba in late 2012.

Pope Francis, the Vatican said, “reiterates his support for the goal of attaining the peace and reconciliation of the entire Colombian people in light of human rights and Christian values, which are at the heart of Latin American culture.”

The Vatican Secretariat of State acknowledged that the pope was invited Aug. 12 “to appoint a representative to participate in the committee that selects the judges” for what has been named the Special Jurisdiction for Peace. “However, bearing in mind the universal vocation of the church and the mission of the Successor of Peter as pastor of the people of God, it would be more appropriate that the said task be entrusted to other parties.”

The Special Jurisdiction for Peace will include a “truth and reconciliation” panel that will help victims and their families discover what happened and receive reparation, as well as tribunals charged with investigating alleged atrocities committed by either government forces or the rebels, handling the trials of those accused of war crimes and considering applications for amnesty.

NEXT: Pope to scientists: Faith doesn’t hurt reason, it leads to greater truth