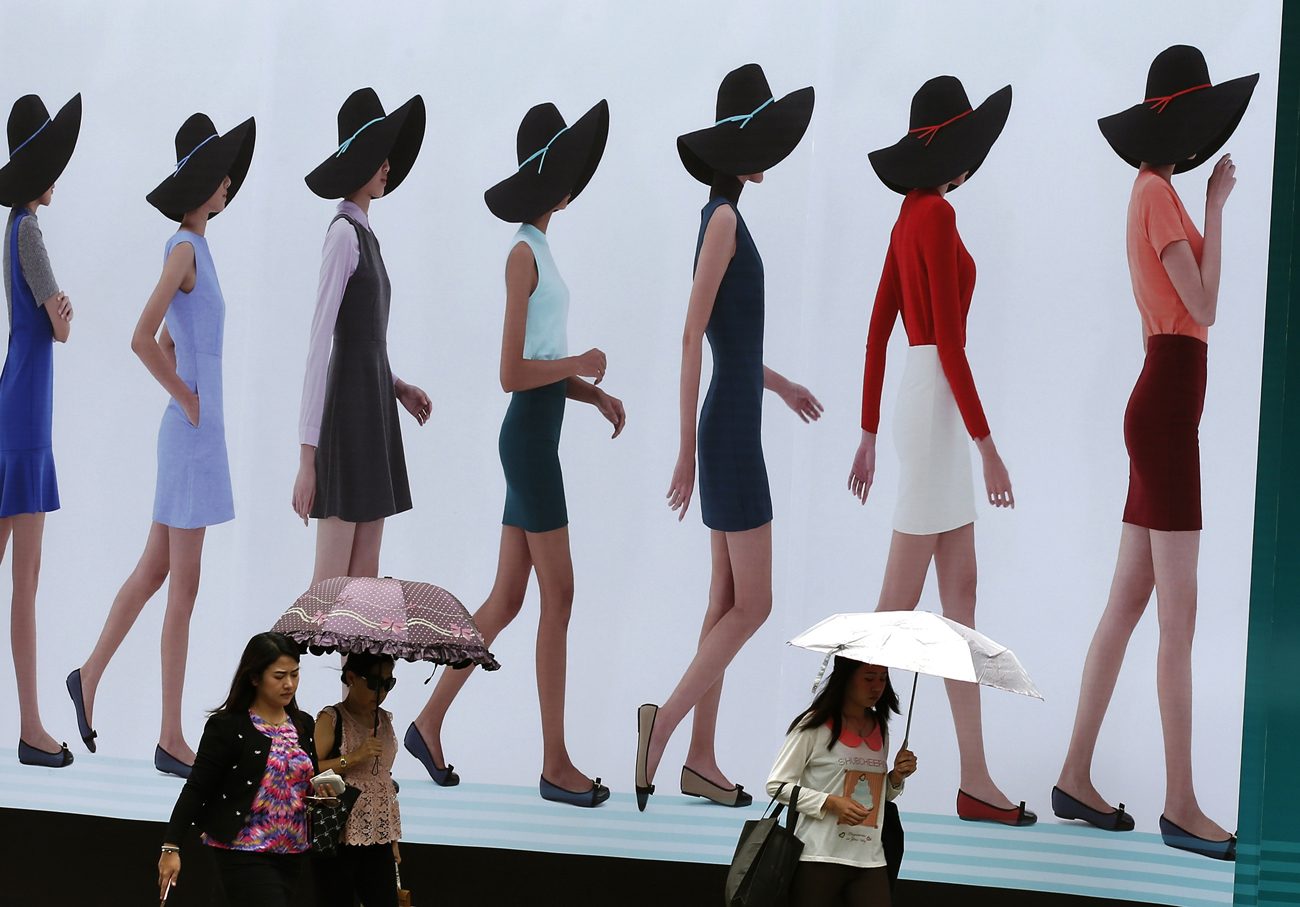 Thai women walk past a billboard in Bangkok, Thailand July 28. Pope Francis prayed for all exploited women and girls during the feast of the Assumption at the Vatican Aug. 15. (CNS photo/Narong Sangnak, EPA)

VATICAN CITY (CNS) — Celebrating the feast of the Assumption just three days after visiting a group of young women rescued from the sex trade, Pope Francis prayed for all exploited women and girls.

“The Lord bows down to the lowly in order to raise them up as is proclaimed in the Magnificat,” Mary’s hymn of praise to God, the pope said Aug. 15.

“Mary’s canticle leads us to think of many painful situations today and particularly those of women overpowered by the burdens of life and the drama of violence, women who are slaves of the abuse of the powerful, girls forced into inhuman work, women forced to surrender body and spirit to the greed of men,” Pope Francis told thousands of people gathered to pray the Angelus with him.

The pope prayed that exploited women soon would be able to live “a life of peace, justice and love in expectation of the day they finally will feel held by hands that do not humiliate them, but tenderly lift them and lead them on the path to life.”

Pope Francis also prayed on the feast day that Mary would intercede to bring “compassion, understanding and agreement” to the many places in the world experiencing war and violent conflicts.

“My thoughts particularly go to the inhabitants of North Kivu, in the Democratic Republic of Congo, recently struck by new massacres,” he said, referring to reports that suspected rebels killed 42 people in the town of Beni Aug. 13. Such massacres, he said, have been occurring for months in “shameful silence.”

Thousands of people also gathered under the window of the Apostolic Palace Aug. 14 for the Angelus prayer with the pope. In his Sunday Angelus talk, Pope Francis spoke about Jesus’ words in the day’s Gospel reading: “I have come to set the earth on fire.”

“The fire Jesus is speaking about is the fire of the Holy Spirit present and alive in us from the day of our baptism,” the pope said. “This fire is a creative force that purifies and renews, burning away every human misery, every selfishness, every sin, transforming us from within.”

To renew the world and build the kingdom of God, he said, the fire must start in the hearts and lives of individuals. “It does not start from the head; it starts from the heart.”

The Holy Spirit gives those with open hearts “the boldness and fervor to proclaim Jesus and his consoling message of mercy and salvation, navigating on the open sea without fear,” the pope said.

Without the Holy Spirit’s help, he said, the Christian community would “let itself be held back by fear and calculation,” preferring to play it safe.

The church, Pope Francis said, “does not need bureaucrats and diligent functionaries, but passionate missionaries consumed with the drive to bring everyone the consoling word of Jesus and his grace.”

“The apostolic courage that the Holy Spirit lights in us like a fire helps us overcome walls and barriers, makes us creative and pushes us to set out on unexplored or uncomfortable paths, offering hope to all we meet,” the pope said.

Expressing his admiration for priests, religious and lay missionaries who devote — and even risk — their lives to share the Gospel, Pope Francis said the need is greater than ever for Christians willing to allow their hearts to be moved with compassion and reach out to those suffering material and spiritual poverty. Evangelization and mission, he said, need “the healing rhythm of closeness.”