At Mass for a new saint, a new name for St. Teresa Parish 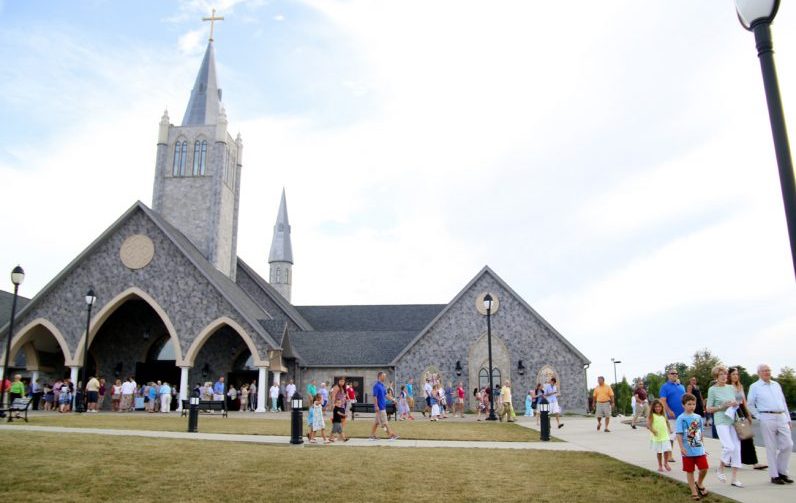 Parishioners leave St. Teresa of Calcutta Church, Limerick, renamed from "Blessed" now that the parish patron has been canonized. Photo by Sarah Webb) 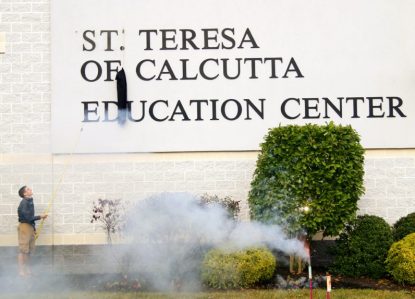 A student of the parish school helps unveil the newly renamed St. Teresa of Calcutta Education Center in a ceremony at the parish in Limerick. Sarah Webb)

The canonization of Mother Teresa of Calcutta this month by Pope Francis didn’t just give the Catholic Church a new saint, it gave over a dozen churches across the United States a new name.

Founded in 2006 out of the former parishes of St. Clare in nearby Linfield and St. Peter in Pottstown, the name for St. Teresa of Calcutta Parish came out of suggestions by parishioners. According to the pastor, Father Paul Brandt, the officials of the Archdiocese of Philadelphia then considered these suggestions and from the top three — to this day he does not know the other two — the name Blessed Teresa of Calcutta was chosen.

The first building on the parish campus to be completed was the religious education center in 2008. Then in October 2012, Archbishop Charles Chaput dedicated the new church.

It is likely one of the more beautiful newer edifices in the archdiocese, showing it is still possible to give the faithful a church that will help lift their souls to God.

Granted, it is easier to do this when there is a wealth of artistic and architectural materials from closed parishes in the Philadelphia area. The gorgeous wooden confessionals, the marble communion rails, the striking stained glass murals, holy water fonts, painted statues, pulpit, cantor’s stand, high altar and stations of the cross all came from churches or hospital chapels that have closed.

This beauty provided a fitting setting for the Sept. 11 Mass renaming the parish St. Teresa of Calcutta, which drew people from across the Delaware Valley to fill the pews to their 1,000-person capacity, including about 10 sisters from the Missionaries of Charity.

Auxiliary Bishop John J. McIntyre was the main celebrant for the Mass and his chasuble, a priest’s liturgical vestment, bore the newly minted saint’s image.

The homilist was Father Shaun Mahoney, chaplain for Temple University’s Newman Center, who received the honor because while he was “not a confidant,” he had known Mother Teresa, and she had been fundamental in his discovering his vocation to the priesthood.

He began his homily by noting the “joyous occasion” of the day.

“We’re coming in thanksgiving celebrating the canonization of Mother Teresa. We were expecting it, we were anticipating it, but it’s here now, and we can rejoice, rejoice that we have a great intercessor for us in heaven,” he said.

Father Mahoney observed that St. Teresa is “a person bringing light in darkness” and noted that he was struck “by this coincidence that this day of thanksgiving for her canonization” comes on a “very heavy anniversary,” that of Sept. 11.

“This is the 15th anniversary of that tragic, horrible act,” he said. “But I couldn’t get over the fittingness of celebrating this thanksgiving today because Mother Teresa — recognizing that she was meant to journey through a darkness to truly be the spouse of Christ, to share in his desolation — said that if she became a saint in heaven, they’d have to look around for her because she’d be spending so much of her time bringing light into darkness here on earth.

“So in a sense our celebration of her life here on this momentous day is an occasion of new hope, a new sense of a love that conquers all darkness.”

During the prayers of the faithful, each intercession was tied into St. Teresa in some way. For instance one read: “Mother Teresa reminds us that love begins at home if we can only make our own homes examples of love. That the families of our parish will see the power of love through strengthening each other, we pray to the Lord.”

The music throughout the Mass was beautifully performed under the leadership of John Seitz, the parish’s music director.

Particularly moving was a song Seitz wrote about St. Teresa several years ago after an encounter with a man who was dying in a hospice. Seitz incorporated the words of St. Teresa, “To do small things with great love.”

The Mass also drew a good number of members from the region’s Indian Catholic community, including Ayesha Gonsalves, who originally hails from Mumbai. A parishioner of St. Joseph Parish in Downingtown, Gonsalves attended with her husband and young children.

She came in honor of Mother Teresa who “is close to our heart because she was in India and she served Indian people, so this means a lot to us,” Gonsalves said.

St. Teresa had a major impact on her life because the saint inspired her to leave her homeland and come to another country as Mother Teresa did.

“When I came here from India and became a citizen, when I took my oath, it was really a very precious and touching moment,” Gonsalves said. “I’m a nurse, and when I see someone serving people as she did, it is very tough.

“She took care of leprosy people, and when I was in nursing school, we had nuns who took care of leprosy people, which was a big deal back in India back then. To see the wounds, the weeping wounds, it is very hard to take care of that. And someone coming from outside India and doing it for us. And I being an Indian, (thought), ‘I can do the same things,’ and that’s what inspired me to be a nurse, looking at how much she did.”

Another person who was touched by the Mass was Missionary of Charity Sister Regis, who joined the order in 1976 and knew St. Teresa well from her two-plus years at the headquarters in Calcutta.

“It’s such joy to see our mother’s name,” she said. “Our mother is here as patroness of this church, and it’s a great joy for me, as if I’m in the presence of her.”

The day was the capstone on 10 years of prayer, hope and hard work for Father Brandt, the parish’s pastor. The canonization and the renaming of the parish have brought about, he believes, “a tremendous energy for Mother Teresa.”

Every week he ends his pastor’s letter with a quote by the new saint because her words “are so simple. They’re nothing real deep, nothing real theological. It’s just simple stuff,” he said, and her infectious love for Christ motivates the works of mercy his many parishioners do.

Father Brandt revealed one interesting aspect of the church’s sanctuary that is not evident to the passerby.

One of the statues adorning the high altar depicts St. Damian of Molokai. Father Brandt chose to represent him because of how the Belgian saint had served lepers in Hawaii, and serving lepers was a big aspect of Mother Teresa’s ministry.

When it came time according to church tradition to put a saint’s relic in the altar stone, he was given a relic of St. Marianne Cope, a recently canonized American saint. Only subsequently did he realize she was a close collaborator of St. Damian’s.

Her relic rests there in the altar along with a single strand of hair from St. Teresa.

PREVIOUS: Last in a long line: Some sisters see end of their congregation in sight

NEXT: Pray for me: Website offers new way to pray to God for one another