Pray for me: Website offers new way to pray to God for one another 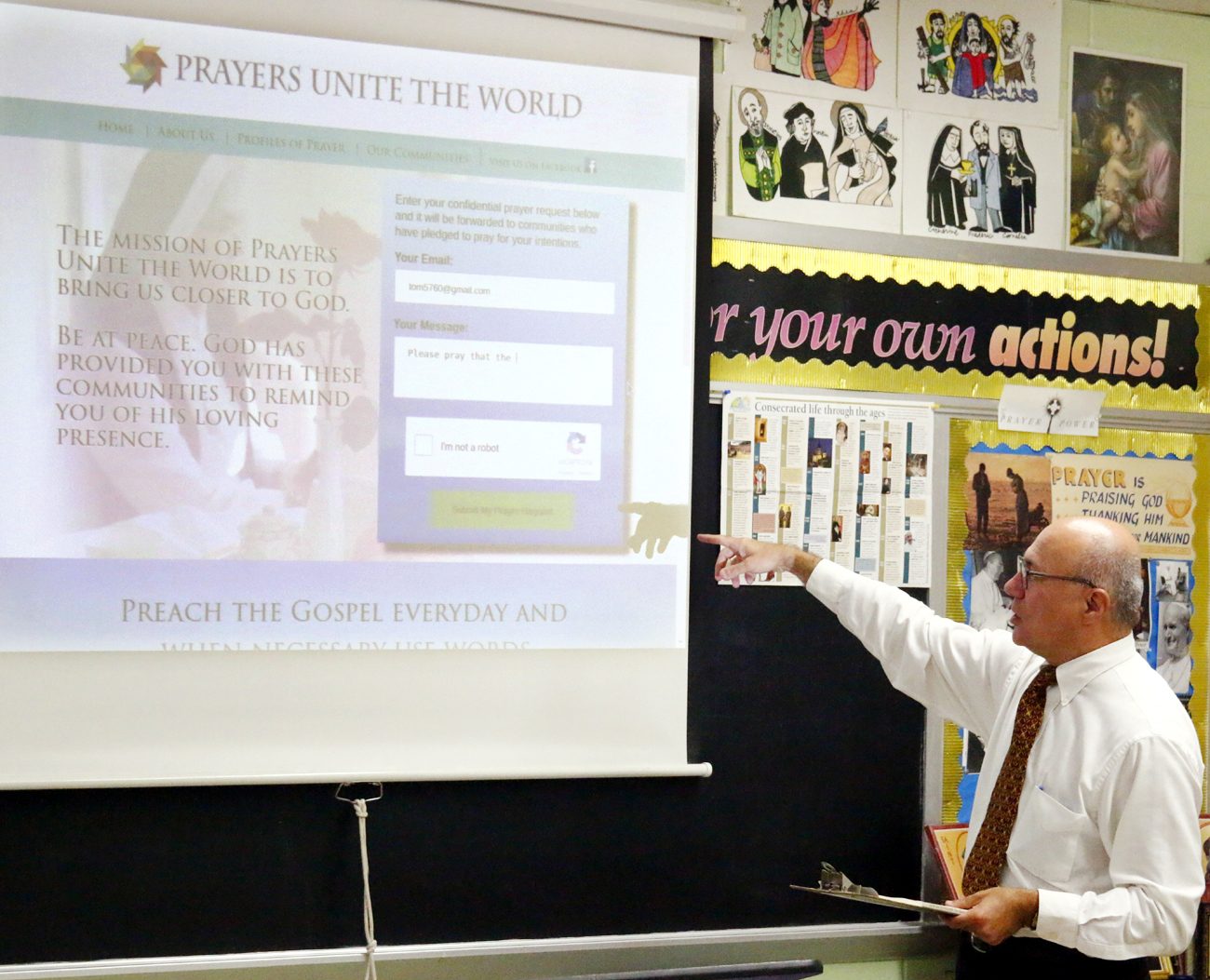 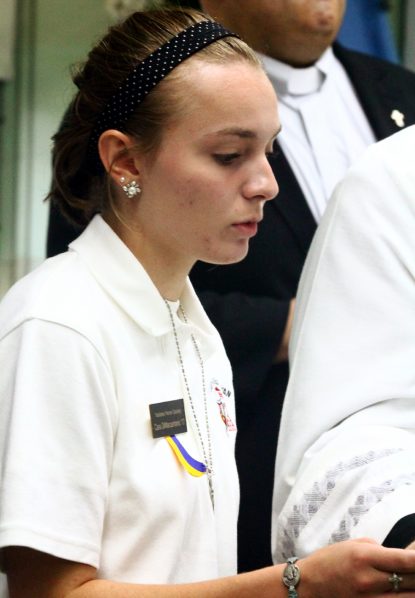 Senior Cara DiMarcantonio reads from Scripture during the blessing of the Prayers Unite the World website. (Sarah Webb)

Think of the new initiative Prayers Unite the World as an Internet-age response to the ancient tradition of praying to God in supplication for the needs of others.

(Watch our video on this story here.)

It had its genesis a decade or so ago as an object lesson in saints as role models and the power of intercessory  prayer for the students in Ed Lawrence’s religion classes at Archbishop Ryan High School in Northeast Philadelphia.

A religion teacher for more than 40 years until his recent retirement, the walls of his classroom were lined with a literal communion of saints, pictures of saints both declared and undeclared.

Among photographs were the “Martyrs of Atlas,” seven Trappist monks who were murdered in their Algerian monastery in 1996. About 10 years ago on his computer, Lawrence came across a website for that monastery and emailed the monks, asking them to pray for his students.

In their reply in French, the monks agreed to do so.

The students were visibly impressed when Lawrence informed them of this. “The look on their faces was mystical when they realized people they didn’t know were praying to God for them,” he said.

One of the school employees who heard about it asked Lawrence to have prayers said for a pregnant daughter in law and this time Lawrence petitioned the monks at Genesee Abbey in New York.

Over time as word got around he contacted other religious orders and congregations, beginning with such local contemplative powerhouses of prayer as the Poor Clares, the Carmelites and the Sister Servants of the Holy Spirit of Perpetual Adoration (Pink Sisters).

More and more prayer requests came in, and Lawrence elicited prayers from many congregations, both contemplatives and those in active ministry.

Through this Prayers Unite the World was born. While it is still headquartered at Archbishop Ryan, it involves students, graduates and many others. 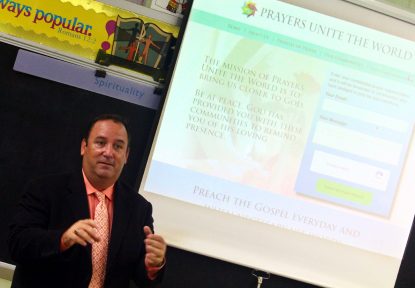 “Every class begins with prayer and we ask the students to pray for these intentions,” Lawrence said.

As prayer intentions are received through the website PrayersUniteTheWorld.org, they are bundled into groups of no more than five and sent to one of the religious congregations. The person who sent the prayer request is also notified by email which congregation received their petition and how to contact that congregation via email of they wish to do so, plus a link to learn more about its charism, or mission.

This really accomplishes double purpose: the petitioner receives the graces and blessing from the prayers offered for their intention and the congregations are able to spread the good news of their work to people who may not have been previously aware of them.

“Ed has a passion and belief in this,” said Sister Catherine Gerald Kelly, who coordinates the program at the Sisters of St. Joseph. “It is a wonderful idea because most congregations are powerhouses of prayer. God bless this work.”

It still remains a teachable moment for the latest generation of Ryan students.

“I thought the website was designed quite nicely. It seems user friendly and like a very cool idea,” commented freshman Jack Scanlon.

In agreement was fellow freshman Abigail Woods who believes Prayer Unites the World is a great way to make someone feel better and get in touch with God. “Whenever I have an important prayer intention in the future I want to use this site,” she said.

Sean Thomas, a junior, thought it beneficial because you can put in your special intentions and “many people will pray instead of just your daily prayer in class. The creator of the website came up with a great idea.”

Victoria Walsh, also a junior, believes, “It’s beneficial because there will be people praying for our intentions at all times of day and with prayer, the more the better.” 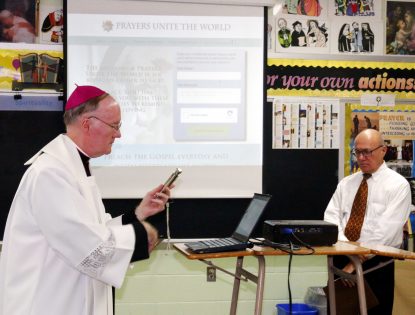 Ed Lawrence was really the founder and motivator for Prayers Unite the World, but he readily admits that without the expertise of others he would not have a prayer of a chance of getting it off the ground. He uses computers of course, but could in no way design a computer program on his own.

It was really his students from years gone by who had the computer literacy necessary for the task.

“For them computers are second nature,” he said.  “There were a number of them especially Margie Ryan Atkinson, Marie Lento and Tom Wambold who were with me all the way.”

Marie Lento was not one of Lawrence’s former students but he was the uncle of her husband and they knew each other for years. Her role was really using her expertise in grant writing to assist with the expenses, including the website design, because there is no charge either to petitioners or the religious congregations.

“In today’s world with all of the problems, people have to return to God and this is a nice way to help them,” she said. “It’s good to know that you are not alone and other people are praying for you.

“Also I felt there is diminished awareness in this generation of the Catholic communities and the Catholic high schools and this is a way to starting bringing them back into the fold.” 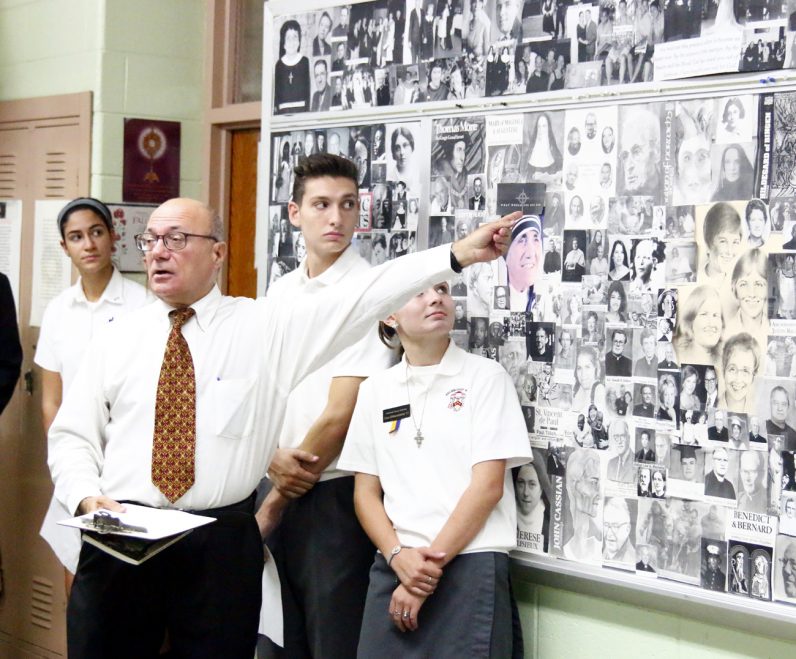 Retired Archbishop Ryan High School teacher Ed Lawrence shows some of the saints on a collage in his former classroom that inspired his efforts to create the new prayer initiative. (Sarah Webb)

PREVIOUS: At Mass for a new saint, a new name for St. Teresa Parish

NEXT: Young and old, but especially young, thrill to evangelist’s message