At St. Peter Claver Mass, a call to reconciliation 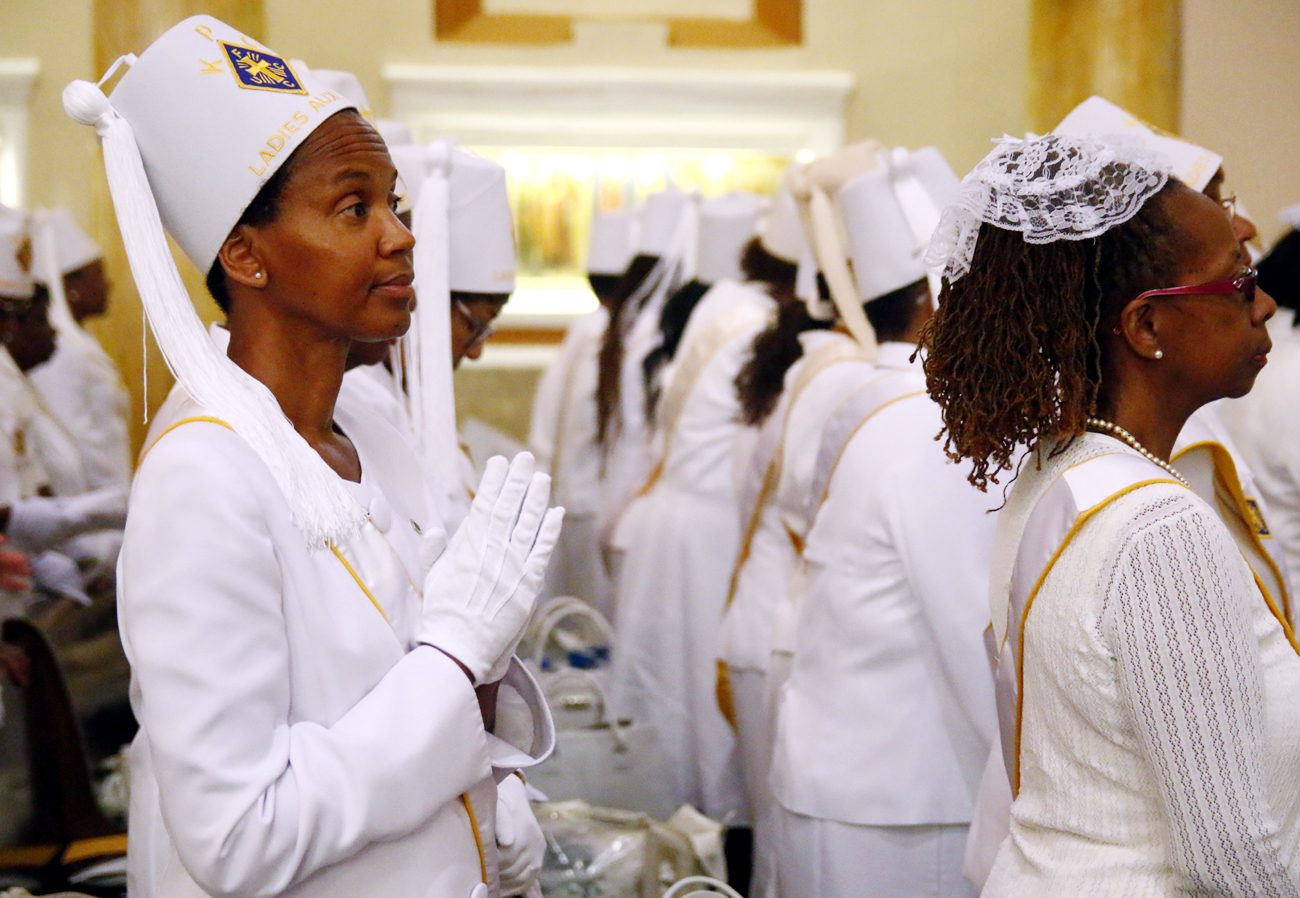 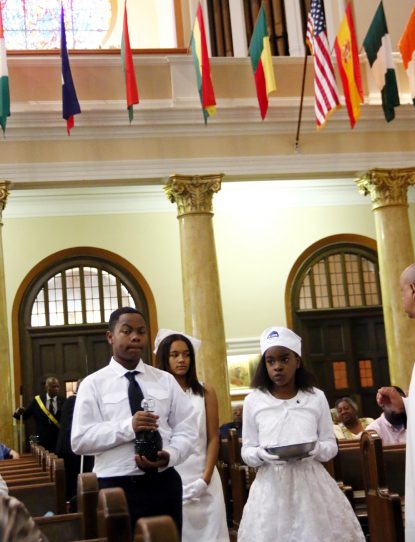 Junior Knight and Junior Daughters of St. Peter Claver present the offertory gifts for the Mass.

St. Peter Claver was “the slave of the negro captives,” declared Bishop Joseph N. Perry, an auxiliary bishop for the Archdiocese of Chicago, in his homily at Philadelphia’s annual St. Peter Claver Mass held this year on Sept. 10 at St. Cyprian Church in West Philadelphia.

The Mass was attended mostly by African American members of the Knights of Peter Claver and Ladies Auxiliary, drawn from councils and courts from Virginia to Connecticut, all in their formal regalia.

(See many photos from the Mass here, and watch a video here.)

Bishop Perry described the life of St. Peter Claver (1581-1654), a Spanish Jesuit priest whose life work was ministering, catechizing and advocating for African slaves brought in shameful condition to the Port of Cartagena, Colombia, over a 40-year span.

“He never asked for a transfer and he is credited with baptizing 300,000 victims of the slave trade,” Bishop Perry said.

He also spoke of the role of slavery in our own United States, and the discrimination against African Americans who still struggle for respect and inclusion in our nation.

But the main thrust of his homily was not condemnation, but a plea for healing.

“God the Father did not take vengeance on us for what we did to his Son. Instead he pardoned us, undeserving as we were.”

As a people, African Americans must be welcoming to more recent newcomers to America, Bishop Perry admonished. “We who have gained freedom from slavery must guarantee freedom for others.”

The celebration also marked the 40th anniversary of the knights in Philadelphia, according to Madelyn Tymes, a long-time leader for the Ladies of Peter Claver. There are at this time 10 councils for men and 13 courts for women.

Although the male branch was established first, the women clearly now outnumber the men, with more than twice the number of women at the Mass than men.

The first council established in Philadelphia was St. Martin de Porres Council at the former Most Precious Blood Parish in North Philadelphia, according to Father Stephen Thorne, a member since his seminary days.

“The Knights and Ladies of Peter Claver represent the role of the laity in their role of serving the Church, being faithful, proud of their faith and church and giving a great example to our young people.”

Msgr. Federico Britto, the pastor of St. Cyprian and host for the Mass, is a Fourth Degree chaplain with the group. He commended the knights for their service and charity to the church and their proclaiming the Gospel.

“That is what St. Peter Claver did in being selfless, taking care of all in their needs,” he said.

Not all at the Mass were members of the Knights or Ladies of Peter Claver, but everyone was certainly familiar with their work.

For example Sister Mary Norbert, a Sister of the Blessed Sacrament who resides at St. Barbara Convent, first encountered the group many years ago in her native New Orleans, where they are headquartered.

“I’ve known them since I was a child,” she said. “I have always admired their dedication and closeness to God. They express the discipleship of the Gospel.” 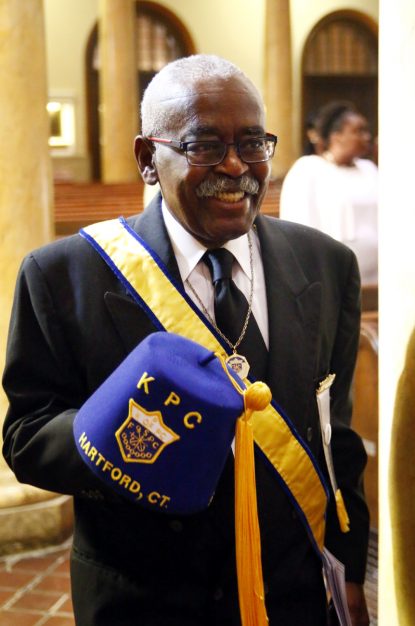 Although the Knights and Ladies are headquartered in New Orleans their foundation traces back to Mobile, Alabama in 1909, when the Knights were founded by the Josephite Fathers. The Ladies were first founded in 1922.

This was because under the admittance process of the K of C, very similar to many fraternal organizations, a candidate could not be admitted if five members of the council in secret ballot objected. Recognizing that this stipulation was being abused by a minority of members to exclude African Americans especially in Southern councils, the Knights of Columbus abolished the voting on new members in the 1960s.

Now African Americans are a presence in most Knight of Columbus Councils and some white Americans belong to the Knights of Peter Claver, which is how it should be.

PREVIOUS: Funds sought this weekend for victims of Louisiana flooding

NEXT: After 75 years, St. Hubert’s still educating young ladies in the Northeast