Local pro-life month starts with march, Masses and welcome to the Sisters of Life 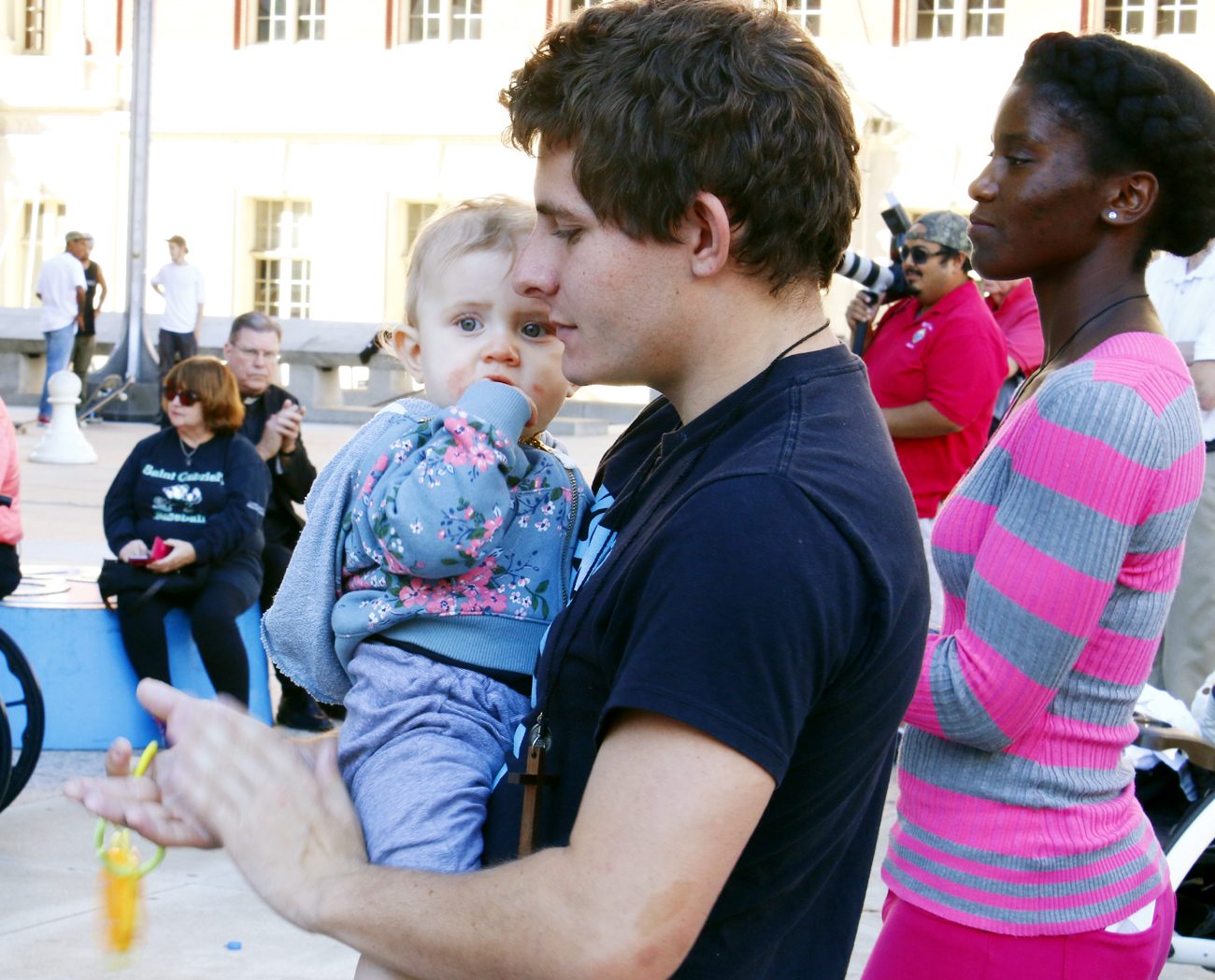 Duncan McLuckie, who was part of the crowd, held his little daughter, Lily, who is turning 1. Duncan along with other participants offer their public witness of respect for life at the “Philadelphia Walk for Life -- Because Every Life Matters” held Sunday, Sept. 25 in a center city Philadelphia plaza. (Sarah Webb)

Sunday, Sept. 25 was Respect Life Sunday in the Archdiocese of Philadelphia and it was celebrated in a variety of ways: Two Masses, a rally and the introduction of a new congregation of women religious to Philadelphia.

The first event was not specifically pro-life but perhaps more than anything else to follow, it exemplified that every human life is special and deserving of our love.

It was the 100th anniversary Mass for St. Edmond’s Home for Children founded in West Philadelphia in 1916 but now located in Rosemont, and it was celebrated by Auxiliary Bishop John McIntyre.

(See photos from the Mass here.)

At the time St. Edmond’s was founded it mostly served children crippled by polio in that era before the polio vaccine. Because the disease has been mostly eradicated, today the home now cares for children with intellectual and physical disabilities. Today’s residents, because of their fragile health, need 24-hour nursing care.

The Bon Secours Sisters who staffed St. Edmond’s for much of its history were eventually succeed by the equally loving Sisters of Mercy and Daughters of St. Mary of Providence and in recent years lay administrators.

One constant has been the volunteer Women’s Auxiliary, which from the beginning and down through the generations continues to assist in St. Edmond’s mission.

“We are blessed by them,” Clofine said, “and it is our children who are really inspiring; they bring us close to God.”

In addition to the children in residence, staff and volunteers at the anniversary Mass, there were graduates, caregivers and family members.

“St. Edmond’s has been wonderful for my daughter,” said David Stanley whose daughter, Rebecca, was in a wheelchair. “She was one of the greeters,” he said.

Respect Life Sunday with a Mass at the Cathedral Basilica of SS. Peter and Paul has been a staple in the Philadelphia Archdiocese since it was first organized in the mid-1980s, originally under the leadership of the Philadelphia Chapter of the Knights of Columbus and more recently under the auspices of the archdiocesan Office for Life and Family.

This year’s observance, billed as “Philadelphia Walk for Life — Because Every Life Matters,” began Sept. 25 with a 3:30 p.m. rally at Thomas Paine Plaza on JFK Boulevard. It featured speakers, music and prayer, with Steven Bozza, director of the Office for Life and Family, leading the program.

(See a gallery of photos from the rally here.)

Dr. Stephen Mikochic, formerly of Temple University and now teaching law at Ave Maria University, is blind, and he spoke of the assaults in society on persons with disabilities.

“God’s mercy is love,” Mikochic said. “He loves each of us despite how broken we are.”

Kate and Gaetano Chetto the parents of four, spoke lovingly of their second child, Lily, who was diagnosed with a severe disability in utero, and the doctors advised them to “interrupt the pregnancy,” a euphemism for abortion. They refused to do this, and although Lily was stillborn at 26 weeks, they are accepting God’s will.

“Lily is our personal saint in heaven,” Kate said. “Love is more powerful than death.”

Marie Joseph, executive director of Legacy of Life which operates two crisis pregnancy centers, spoke proudly of the 1,275 women and counting who chose life rather than abortion over the past eight years through counseling and assistance received through the centers.

Lauren Kretzer, a member of St. John the Evangelist Anglican Church in Abington, spoke movingly of her experience in being persuaded to have two abortions as a young woman.

“Abortion was the only option offered and we believed the lie,” she said. “The truth is women and men who have experienced abortion very much suffer post-abortion stress very similar to post-traumatic stress.” Now she is a speaker for Project Rachel, the healing group for post-abortion women.

Bishop Janice Hollis, the presiding prelate for Covenant International Fellowship, spoke of the assault by the abortion industry on African American women. “We have a mandate as Black leaders to speak out on the issue of life,” she said.

Astrid Guttierez Bennett, who works with the Latino community in Los Angeles assisting women with unplanned pregnancies, spoke of how abortion advocates in her region target Latinos and the poor in general, even giving out coupons for abortion clinics.

Mark Houck, found of The King’s Men, said abortion is not just a women’s issue and men must step in to oppose it also.

Not all of the witnesses were on the speakers program. For example Dr. Monique Ruberu, an OB/GYN doctor at Holy Redeemer Hospital, was manning a sign-up table for 40 Days for Life. “I was praying outside of the clinic at 12th and Locust Streets when someone told me about this,” she said.

Duncan McLuckie, who was part of the crowd, held his little daughter, Lily, who is turning 1. “Her mother and I are not married but fortunately she is as pro-life as I am,” he said.

A spirited choir from St. Charles Borromeo Parish in South Philadelphia plus student groups from various high schools wearing their school uniforms added to the event.

Jenna Violi, a teacher at St. Basil Academy, was leading a small group from her school.

“We are here to support the pro-life movement and surround ourselves with fellow Christians and bring that spirit of peace and love to the city,” she said.

After the rally the participants with banners flying headed off to the cathedral to participate in the 6:30 p.m. Mass celebrated by Archbishop Charles Chaput.

At the cathedral preparing for the procession were Fourth Degree Knights of Columbus John Nimmerichter and Jim Banks in full regalia. They came all the way from Stowe, Montgomery County, on the northern border of the archdiocese.

“It’s important to Philadelphia and the surrounding counties to support life,” Banks said. “Every life matters.” 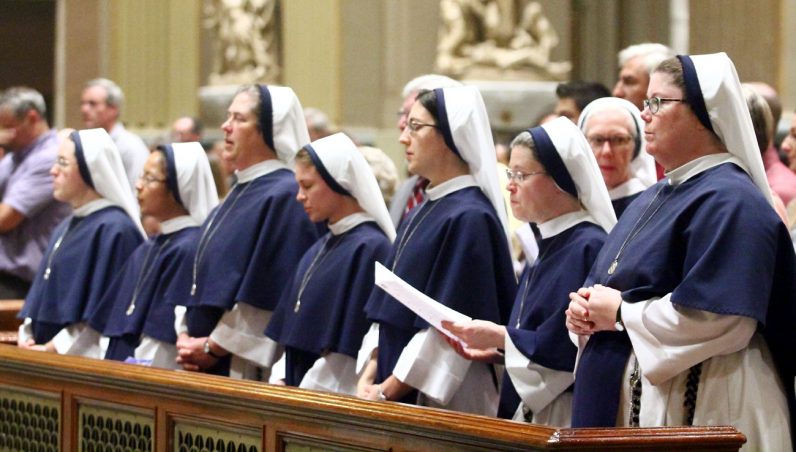 A real highlight of the Mass for Life was the announcement by Archbishop Chaput that the Sisters of Life, who were founded in New York in 1991, would be opening a convent in Philadelphia next year.

“We are excited to be coming,” said Sister Mary Elizabeth, the congregation’s vicar general in an interview.

It is especially good news to her because she is from Mother of Divine Providence Parish in King of Prussia and a graduate of the former Bishop Kenrick High School in Norristown. She entered the Sisters of Life in 1993.

“We were founded to provide the sense of sacredness to all human life,” she said. “Our first apostleship is the prayer apostleship; we pray four hours daily.” The sisters’ corporal work of mercy is mainly helping pregnant women with their needs and promoting the sacredness of all human life.

The congregation in its 25 years has spread to Connecticut, Washington, D.C., Denver, Toronto and soon Philadelphia, where they are planning to use the former convent of St. Malachy Parish in North Philadelphia. The order is growing, with 16 postulants and 18 novices in formation at this time, according to Sister Mary Elizabeth.

While the particular sisters who will be sent to Philadelphia have not yet been selected, there was a small group of Sisters of Life on hand at the archbishop’s Sunday Mass, led by Sister Mary Toomey.

“St. Malachy’s is a glorious old convent,” she said. “We are especially excited about coming to Philadelphia because Cardinal John O’Connor (late Archbishop of New York) was our founder and he was raised in a row house here. We have a lot of sisters from Philadelphia; two were from Temple University.”

One of those sisters from Philadelphia was present: Sister Loretto Michael, who formerly was a member of St. Matthias Parish, Bala Cynwyd.

Another sister of a different type was sitting with the Sister of Life. That was Mary (O’Connor) Donegan, Cardinal O’Connor’s birth sister.

“I love the fact that they are coming here to Philadelphia where we grew up in St. Clement Parish,” she said.

Although the Sisters of Life are not expected to be here officially until next year their presence was certainly a ray of sunlight on this particular Respect Life Sunday. 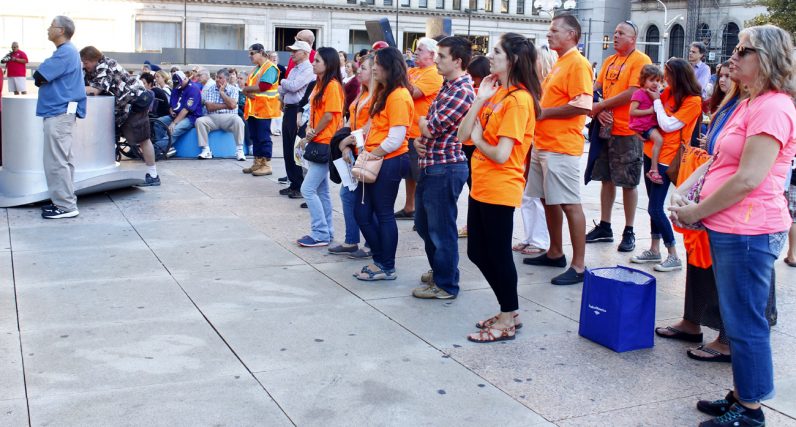 NEXT: Archbishop Chaput offers prayers on cusp of Jewish holidays