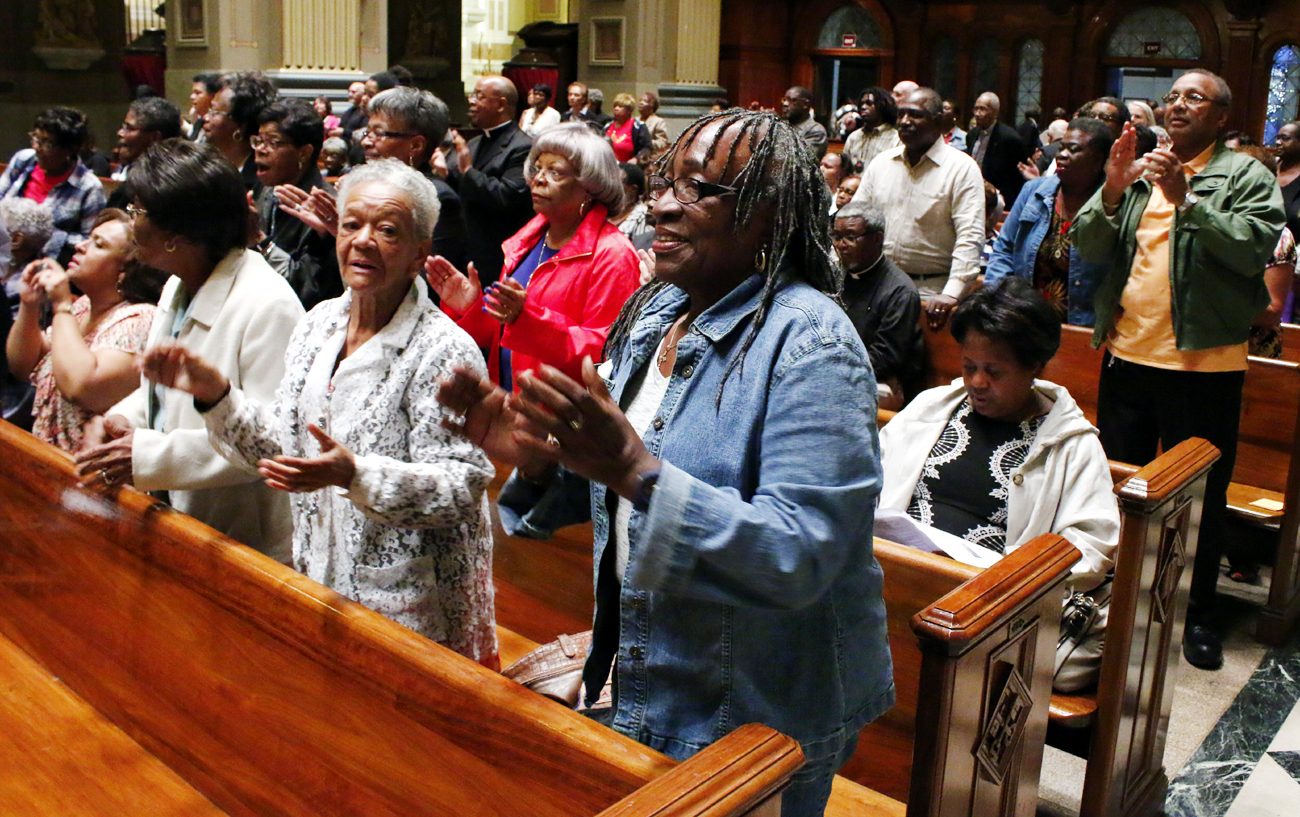 Catholic faithful raise their hearts and voices in prayer and praise at the Sept. 26-27 revival sponsored by the archdiocesan Office for Black Catholics. (Photo by Sarah Webb) 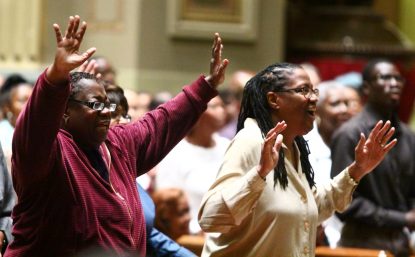 From left, Ora King of St. Vincent de Paul Parish and Alice Yellock of St. John the Evangelist Parish praise the Lord at the revival.

The Cathedral Basilica SS. Peter and Paul was nearly filled to capacity as more than 1,500 people came out for the two-day revival Monday and Tuesday night, Sept. 26-27, hosted by the archdiocesan Office for Black Catholics.

(See more photos from the revival here and watch a video here.)

As a singer, in addition to his ministry as a deacon, he integrated songs into his homilies including “Can’t Nobody Do Me Like Jesus,” which was also the theme for the revival.

The Knights of Peter Claver and Ladies Auxiliary added their presence to the prayerful and moving second annual event.

Among those in the cathedral on Monday night was Margwen Watson, a member of St. Athanasius Parish in Philadelphia’s West Oak Lane section. She was joined at the event by her daughter, Tiffany Watson, who a year ago was extremely ill. So this family came with a great deal of gratitude for the blessings they received.

“A year ago I was really sick,” Tiffany Watson said. “I didn’t know how I would make it to work or anything else. Being here is a testimony in my life. I feel that it was grace. So I came here with a testimony.”

“I was spiritually refreshed,” said Joe Harkins, who worships at St. Benedict Church, a site of St. Athanasius Parish. “I am leaving here emotionally uplifted. The deacon was an enthusiastic and exciting homilist who was bringing us the gospel of love. He made so many important points and showed us from the Bible how we can show love now.”

Catherine Murray and Maxine Graves rode one of the many buses chartered for the regional revival. They are longtime members of St. Katharine Drexel Parish in Chester. For Murray, the need to be more embracing and inclusive was one of the messages she took away from the revival.

“We should love others in our parish no matter where they come from,” Murray said. “We should not look down on anyone because they are of a different (socioeconomic class). We are supposed to be all Christians and we need to show this in how we treat each other.”

In his homily Deacon Houston said he was inspired by Pope Francis’ visit to Philadelphia last year.

“From what he said, Pope Francis instilled in him this message of love and set him on fire,” Murray said.

The message of mercy resonated with Graves, who said she has been reflecting on mercy ever since Pope Francis declared 2016 as the Year of Mercy. “This revival helps us to be more merciful. We were brought here to hear that,” she said.

Another highlight of the revival was the music led by the Philadelphia Catholic Mass Choir’s director, Kenyatta Arrington. The choir opened the program with singing, “Victory is Mine.”

After Deacon James Mahoney of St. Athanasius Parish offered the opening prayer and Allison Walker of St. Barbara Parish proclaimed a reading from Scripture, the choir sang, “Go to God in Prayer.” They brought most of the faithful in the cathedral to their feet as many were clapping, shouting and singing along with the nearly 100 singers in the choir.

During each night’s service, which began with musical preludes at 6:30 p.m. and the Liturgy of the Word at 7, appeals to charity were made.

Contributions to the freewill offering at the Monday evening revival will benefit the victims of recent flooding in Louisiana. Father Thomas Whittingham, pastor of St. Katharine Drexel Parish, explained the need for the funds and how they will be used.

The Fourth Degree Knights of Peter Claver participated in the processions of the revival while members of the Black Apostolate served as ushers and greeters. The cross bearer was Jamey Moses, the newest African American seminarian at the St. Charles Borromeo Seminary in Wynnewood.

“This was just fantastic,” said Ella Cooper, a member of St. Raymond of Penafort Parish in the city’s Mount Airy section. “Deacon Houston spoke the truth. The songs and singing was wonderful. I am revived and I am going home to share all this renewed spirit with my husband.”

The congregation, led by members of the Philadelphia Mass Choir, pray over Deacon Lawrence Houston before he preaches his homily Monday, Sept. 26. (Sarah Webb)

PREVIOUS: Blessed are the poor, and those who serve them, such as the Vincentians

NEXT: Local pro-life month starts with march, Masses and welcome to the Sisters of Life