Blessed are the poor, and those who serve them, such as the Vincentians 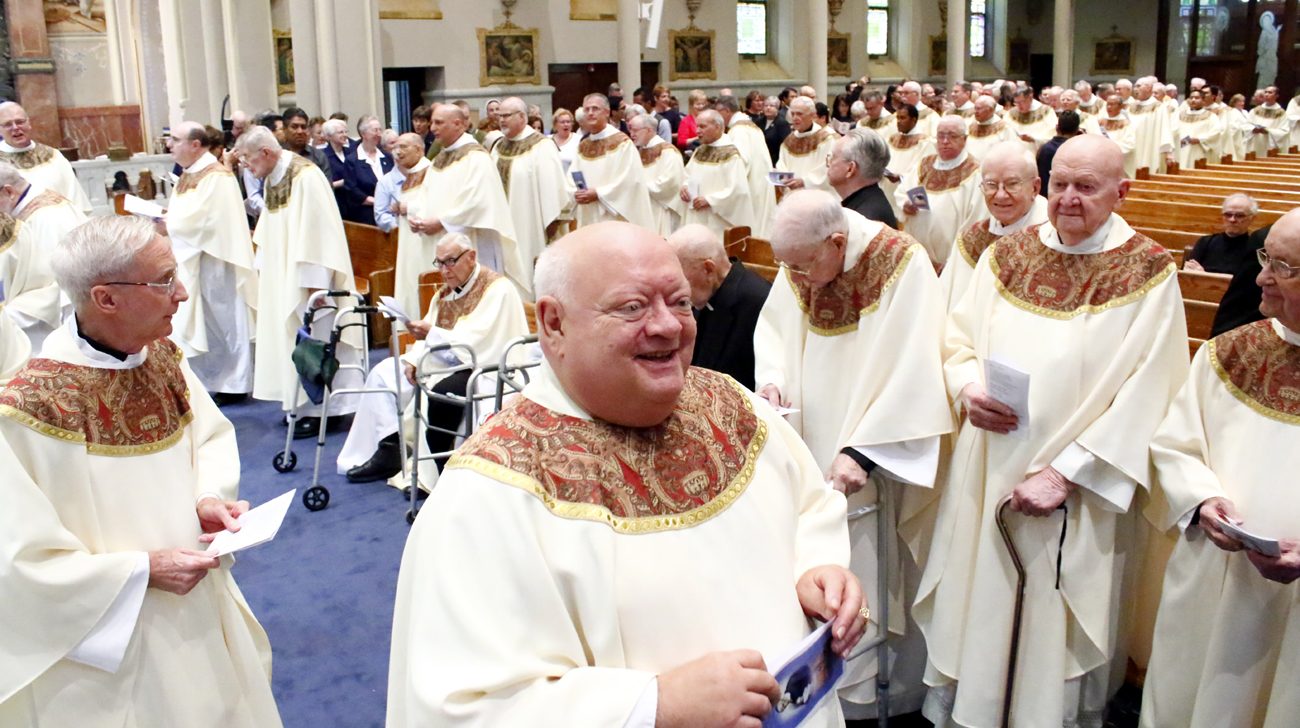 Vincentian Father Carl Pieber, executive director of the Miraculous Medal Shrine in Germantown, celebrates with his Vincentian confreres their 200 years' service in America Sept. 24 at the shrine. (Sarah Webb)

The Gospel at the 10:30 a.m. Mass on Sept. 24 at Philadelphia’s Miraculous Medal Shrine centered upon the Beatitudes, and that was at it should be. The Mass, which drew Vincentian priests, brothers and seminarians from around the country, was in celebration of the 200 years of service by Vincentians in America.

(See a photo gallery from the Mass, here.)

One would be hard put to find a religious order or congregation more firmly dedicated to the practice of the Beatitudes, especially through service to the poor, than the Congregation of the Mission, the formal name of the Vincentians.

The congregation was founded by St. Vincent de Paul in France in 1625 and quickly spread throughout Europe.

In 1813, in response to a plea from Bishop Louis Dubourg, a band of 13 Vincentian priests and brothers drawn from several nationalities sailed from Italy and after 44 days at sea arrived in Baltimore then set out for St. Louis where they established their first mission.

“Thirteen represents a great moment in the history of the Congregation of the Mission,” said Bishop David O’Connell, C.M., Bishop of Trenton who was the principal celebrant and homilist at the jubilee Mass.

“Bringing the spirit of St. Vincent de Paul to our country was a new chapter in the life of the community,” he said. “Preaching the Gospel of the Poor is not just a slogan, it is our motto. It is a mission and it is our mission.”

From St. Louis the Vincentians, who were then better known as the Lazarists after the name of their motherhouse, spread throughout the country. They were invited to come to Philadelphia by Bishop Francis Patrick Kenrick in 1841 to conduct the fledgling St. Charles Borromeo Seminary, which they did until 1852 when the diocese itself had sufficient priests to take over seminary formation.

Their first parish in the city was St. Vincent de Paul in Germantown, established in 1849. From that time on the Vincentians have been the dominant Catholic influence in Germantown, especially through outreach programs to the poor.

At one point there were three Vincentian parishes in Germantown but Immaculate Conception and St. Francis of Assisi merged into St. Vincent in 2012. 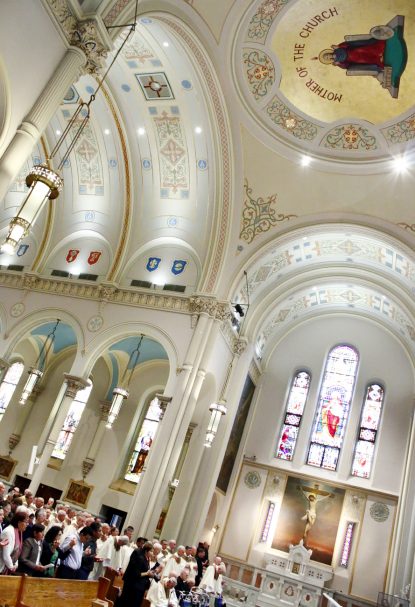 The interior of the Miraculous Medal Shrine, run by the Vincentian order, in Philadelphia’s Germantown section.

At this time in addition to St. Vincent parish, they have the Provincialate Offices for the Eastern Province, a residence for retired Vincentians and a seminary for Vincentians serving in Hispanic ministry in various places in the Philadelphia Archdiocese.

And of course there is the beautiful Miraculous Medal Shrine, a favorite place of pilgrimage for Philadelphians and beyond since 1927 when it was founded by Vincentian Father Joseph Skelly.

At this time there are almost 4,000 Vincentians worldwide and the congregation is growing in many places, including Asia, Africa, Eastern Europe and South America, according to Father Robert Maloney, who was the Vincentian Superior General from 1992 to 2004.

“We are doing well in our own province,” he said, adding at this time there are 20 young men in the seminary, many of them Hispanic.

Of those seminarians six are in the De Paul Novitiate and three more attend St. Charles Seminary.

One of the seminarians in attendance was Jimmy Mullen. “I was working for Blue Cross and living in Germantown, that is how I found the Vincentians,” he said. “I still have about five years to go.”

Today of course, there are not only the priests and brothers in the Congregation of the Mission, there are the many consecrated women in the sister congregation founded by St. Vincent, the Daughters of Charity, and many other religious congregations that take St. Vincent as their role model. There are also a huge number of lay followers in the Society of St. Vincent de Paul.

Their vocation, as Bishop O’Connell put it, is “to set people’s hearts on fire, to do what the Son of God did, to set the world on fire with his love.”

NEXT: Revival raises the Cathedral’s old roof in two days of prayer and song