Young and old, but especially young, thrill to evangelist’s message 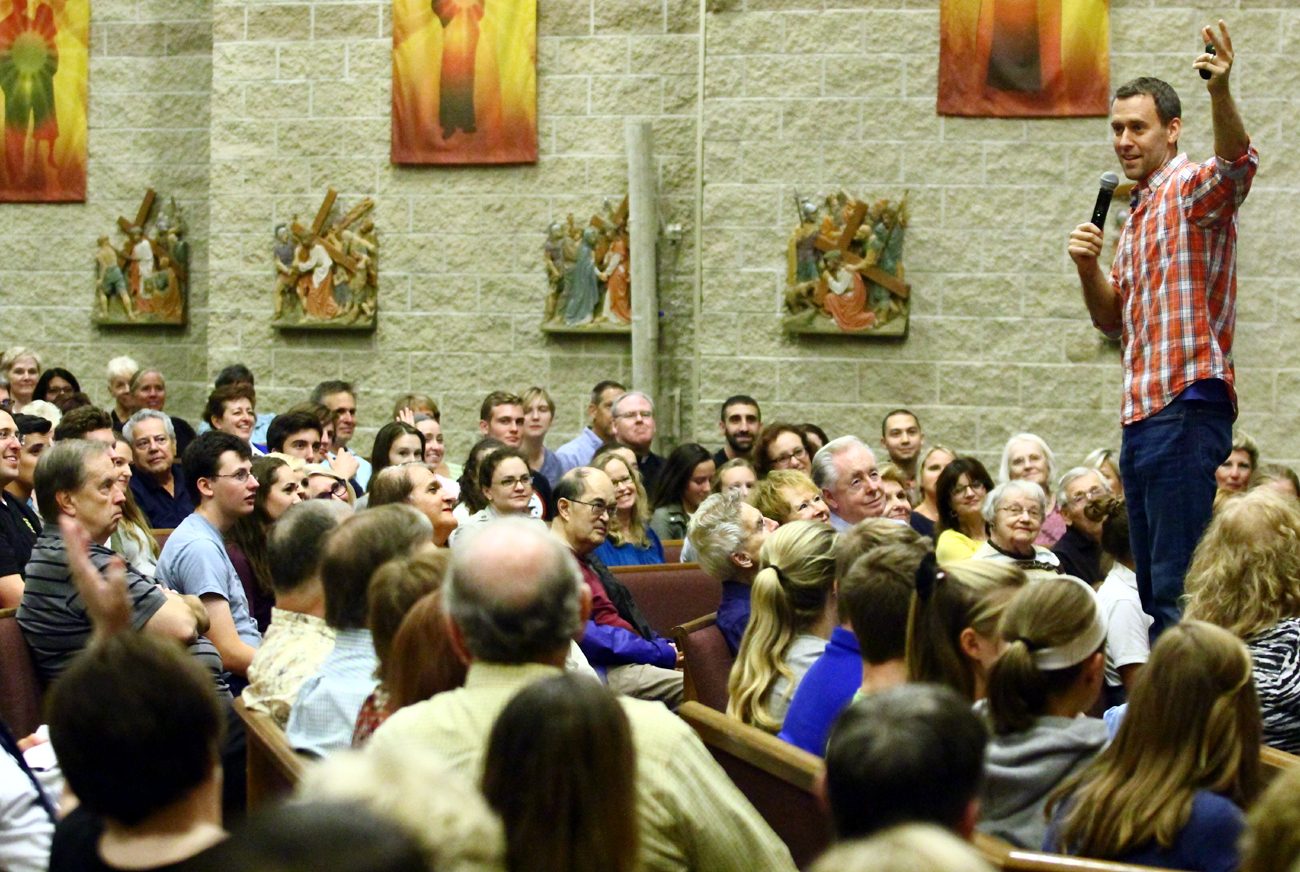 Chris Stefanick brings his energetic message about the love of God to an audience primarily of young people Sept. 21 at St. Martin of Tours Church in New Hope. (Sarah Webb) 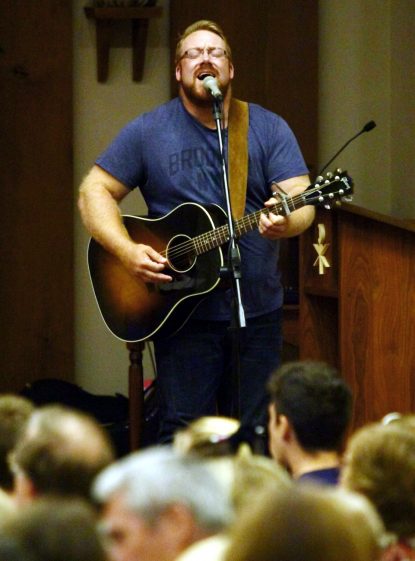 “God is Love” was an essential part of the message delivered by Chris Stefanick, a popular youth evangelist who brought his upbeat program, Reboot! Live! to St. Martin of Tours Parish in New Hope on Sept. 21.

(Watch a video of the presentation here.)

Although this was his first presentation in a Philadelphia-area parish, he also brought his upbeat message to the World Meeting of Families’ Youth Congress in Philadelphia in September 2015.

“He’s a wonderful presenter. I think the turnout here is great and really the young people are enjoying it,” said Bishop Michael Fitzgerald, who attended the event and also heard Stefanick speak last summer at World Youth Day in Poland.

The audience in New Hope was a nice mix of generations, but certainly there was a far greater percentage of teens and young adults than one typically encounters in church in this generation.

“I’m here with an open mind. I heard about Chris as a World Youth Day speaker and am excited that we have the opportunity to hear him tonight,” said Sister Maria Sophia Gerlach, a young adult member of the Sisters of the Holy Family of Nazareth.

Although Stefanick is a former youth minister in Los Angeles and a former youth director for the Archdiocese of Denver, his message was universal, applying to all generations including older adults. One of them was Amy Campbell, a member of St. Martin Parish who brought along her friend Jeanne Liwacz, who worships at Central Baptist Church in Pennsburg.

“I like the idea that Chris brings a reality about what is going on in the world and that God should be at the forefront of everything,” Campbell said.

“I’m enjoying it very much, he is speaking truth,” Liwacz added.

Stefanick’s presentation was laced with humor but the topic was serious and thought-provoking.

“We all have the experience of love,” he told his audience. “We come into the world looking for love. The love we were born to find is right here. The Gospel message of love is the greatest story ever told and it is the love you and I were made for. We have forgotten that this message is what it is all about.”

We Christians, he said, “believe in that power that existed before space and time; that immaterial force is love. God is love. God’s love creates.

Commenting at the intermission Michael Scully, a sophomore at Central Bucks West High School, said, “This is a fantastic experience. I’ve never heard Chris talk before, but I’ve seen his videos and he is even better in person.”

Scully’s buddy, Joseph Anthony Gavinelli, a sophomore at Central Bucks East, added, “I thought it was a great experience and I don’t regret coming. He seems to be a great guy.”

Brother and sister Devin and Deanna Bock attend New Hope Solebury High School; he is a junior and she is a freshman.

“Well, I thought it was really amazing,” Devin said. “I’m just calm and happy and reflecting on it. He is better than I thought he would be.”

“I went to something similar to this at (St. Francis University) Steubenville,” Deanna said. “It is really inspiring.”

Clearly these young people are probably in the pews of their parish churches on Sundays, but one does wonder, if more preachers could emulate Stefanick’s technique of delivering a very serious message in a user-friendly manner, might there be more young people at Mass?

PREVIOUS: Pray for me: Website offers new way to pray to God for one another

NEXT: Blessed are the poor, and those who serve them, such as the Vincentians