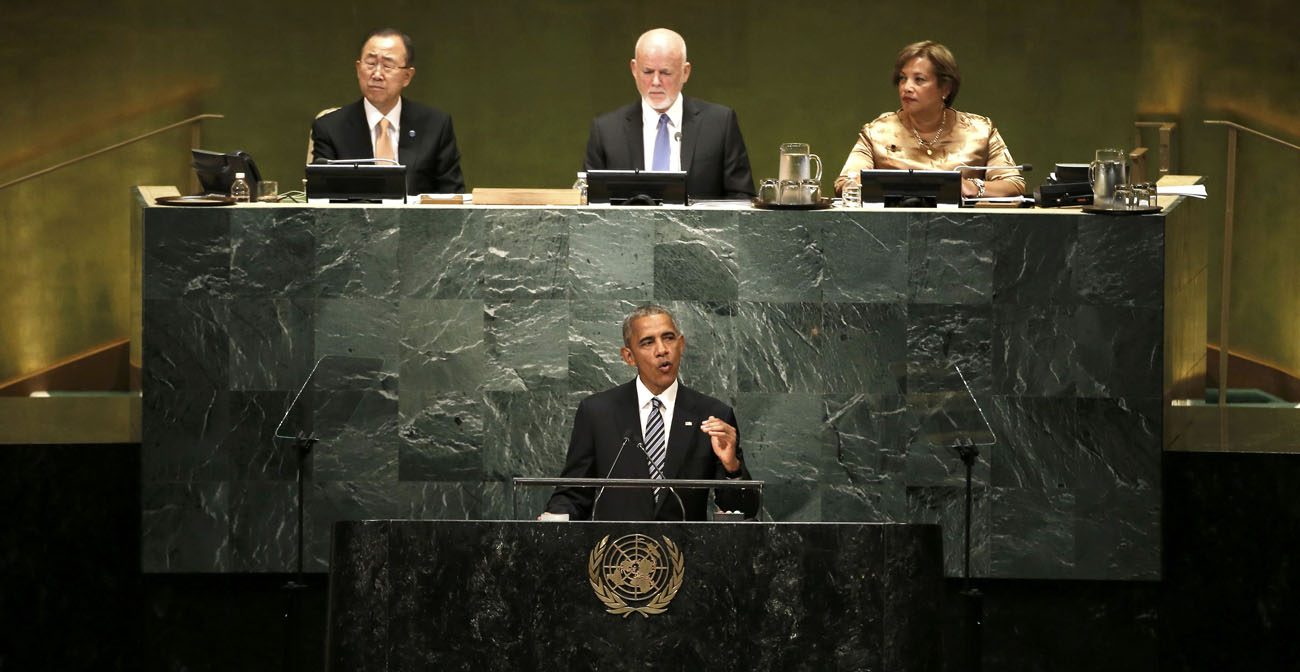 U.S. President Barack Obama addresses the U.N. General Assembly Sept. 20 in New York City. Speaking for the last time at the United Nations as president, Obama said that while the world has become safer and more prosperous, nations are struggling with a devastating refugee crisis, terrorism and a breakdown in basic order in the Middle East. (CNS photo/Mike Segar, Reuters)

WASHINGTON (CNS) — Eighty-six percent of the world’s refugees are living in developing countries and it is particularly hard for those countries to meet refugees’ needs and provide them an education and a livelihood, according to a senior policy and legislative specialist at Catholic Relief Services.

Overall, 65 million people are displaced worldwide, the highest number since World War II, according to the U.N. High Commissioner of Refugees.

“After World War II, many of the refugees at that time were living in camps for a certain amount of time, then would be resettled or helped to be repatriated” in their home country, Jill Marie told Catholic News Service.

Today, she said, it is not unusual for refugees to live 20 years in a country that is not their own, she said, citing the 5 million Afghan refugees who have lived in Pakistan for “a very long time,” many for almost their entire lives.

Millions of Afghans have fled their homeland during waves of civil war spanning more than three decades.

Marie made the comments to CNS Sept. 16 in advance of the special summit that U.S. President Barrack Obama convened Sept. 20 at the United Nations to address the global refugee crisis.

Before the summit, CRS, the U.S. bishops’ overseas relief and development agency, joined 30 other nongovernmental organizations in pledging a total of $1.2 billion to help address the refugee crisis over a three-year period.

All of the groups made the pledge as members of InterAction, the largest U.S. alliance of international NGOs.

The funds will provide urgent medical assistance, food and nutrition, security, shelter, education and other essential services to displaced populations, according to CRS.

Each entity will manage its own money but report to InterAction as to how it is used, said Marie.

She also told CNS that in addition to its monetary pledge, CRS hopes the U.S. Congress would “put more pressure on the U.N. to update its humanitarian architecture,” which currently is more the model addressing what World War II refugees faced than what today’s refugees confront.

“Refugees are no longer in camps but move into cities, with an uncle or a brother,” Marie explained.

Some are “paying rent to put a tent up in somebody’s front yard and paying for their facilities,” she said, which means it is “much harder to get access to these people, harder to find them” to assess their needs and help them.

“That’s where the Catholic Church comes in,” using its networks to find people, Marie said. Coordination and implementation of assistance to refugees is “better left to agencies like CRS,” she added. “We have the agility. We work with local partners and we can move with them.”

According to CRS, the Baltimore-based agency has assisted more than a million war-affected Syrians across the Middle East and Europe since the armed conflict in their home country began almost five years ago. Among its other assistance efforts, the agency has aided Afghans living in Pakistan; displaced people in Somalia; those fleeing the Muslim militant group Boko Haram in West and Central Africa; and those forced from their homes by the impact of climate change in Bangladesh.

Marie praised the Obama administration for its response to the Syrian refugee crisis in particular; on Sept. 13, the administration said the U.S. would accept 110,000 Syrian and other refugees over the next fiscal year that begins Oct. 1, a boost from the current number of 85,000.

The U.S. “historically has settled more refugees than anybody,” Marie noted, but “we would like to see more being resettled globally, because there are so many more refugees.”

U.S. Ambassador to the U.N. Samantha Power, too, recently commented that, to date, “a small number of countries have been carrying a disproportionate share of the refugee opportunity and burden.”

By the close of Obama-convened summit, a number of countries represented there “committed to admit significant numbers of refugees into their countries for the first time in recent history,” said a statement issued by the White House in late afternoon Sept. 20.

The 32 governments participating in the summit, it said, had contributed “roughly $4.5 billion additional dollars to U.N. appeals and international humanitarian organizations than in 2015.”

The statement added that the summit sought “to provide longer-term solutions for refugees stranded in exile, whose lives are on hold.”

“Governments participating here today have come together, with different types of commitments, to approximately double the global number of refugees resettled and afforded other legal channels of admissions and to improve asylum systems,” it said.

In addition, some participants “committed to starting or significantly expanding new UNHCR-facilitated third-country resettlement programs and others have greatly increased the numbers of refugees admitted through family reunification or humanitarian admission visas.”

Carolyn Woo, the president and CEO of CRS, who attended the leadership summit on refugees, said afterward that what she witnessed there “was an uncommon show of common purpose to address the many challenges posed by the refugee crisis among countries that don’t always see eye to eye.”

On Sept. 19, U.N. member states held a high-level plenary meeting to reaffirm their shared responsibility for refugees and migrants. At the same time, Catholic and other leaders held a side event on the role of religious organizations responding to migrant and refugee movements, with the Vatican secretary of state, Cardinal Pietro Parolin as a keynote speaker.

NEXT: A year after pope’s visit, domestic workers gather on immigration issue