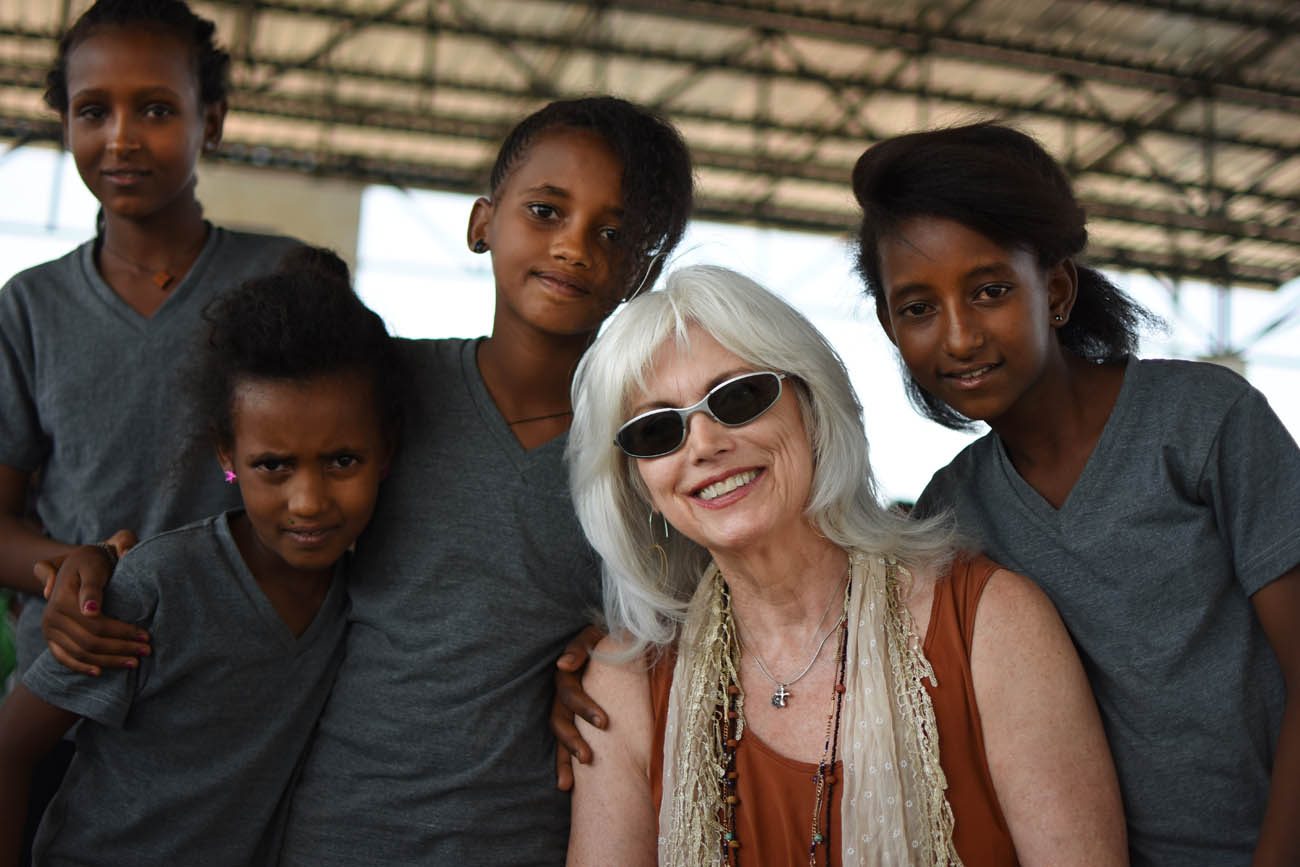 WASHINGTON (CNS) — Emmylou Harris, who has won more than a dozen Grammy awards during a 45-year career singing country music, is heading up a series of concerts this fall to benefit Jesuit Refugee Service.

The idea to do so came from a longtime friend, coupled with a visit to a JRS-run camp in Ethiopia for Eritrean refugees.

The friend, Gail Griffith, was an early fan of Harris’ as she was playing coffeehouses and clubs in the Washington area in the early 1970s hoping for a break. Harris said Griffith, then a student at Georgetown University, was one of the “three or four” folks who would come to her gigs regularly.

Today, Griffith is campaign director of JRS’ Global Education Initiative, which will benefit from the proceeds of the 11-city October tour.

In the 1990s, Griffith had convinced Harris of the need to mount benefit shows for the victims of landmines buried during long-since-ended wars. The Concerts for a Landmine-Free World, featuring Harris and fellow country singer-songwriter Steve Earle and given over two years, raised substantial sums.

Earle is a part of this mini-tour, as are Patti Griffin, Buddy Miller and the Milk Carton Kids, which is being billed as “Lampedusa: Concerts for Refugees.” Lampedusa is an Italian island between Sicily and Tunisia. It has been a way station for refugees fleeing Libya and other northern Africa countries. It also was where Pope Francis visited refugees during his first official trip as pope.

Griffith “thought we could use this same blueprint” for the Lampedusa concert series as with the landmine series, Harris told Catholic News Service in a Sept. 8 telephone interview from Nashville, Tennessee.

“Raise some money, but maybe (raise) awareness for the refugee crisis in this country, by putting this same series of musicians on the stage, where singer-songwriters sit and play their music. And while we’ve got their attention, we can talk and focus on this terrible problem — get more people engaged with their pocketbooks and their hearts,” she said.

“If it weren’t for scheduling, there were artists who wanted to do this but they already had tours booked,” Harris added, so some others may drop in for a show or two. Joan Baez, she said, would take part in the New York concert.

Harris had never been to Africa until her June visit to the JRS camp. In a JRS podcast, she admitted that until then, “I didn’t even know how to pronounce Eritrea.”

However, she told CNS, what she saw in the camp more than countered the dire warnings given by others.

“I came back with a sense of hope and goodness of the people who dedicated their lives to give these young people a chance,” Harris said. She was impressed not only with the school JRS had established in the camp, populated mainly by unaccompanied minors fleeing their homeland, but with “the art and the music and the dancing” they were being taught by staff.

Harris also came away impressed by Ethiopia itself. “Here is a country that is relatively poor compared to the United States, and a Christian country that has opened its borders to these thousands of mainly Muslim people coming into their country, opening their hearts and giving them a place of temporary safety,” she said. “I think it was a lesson for the world. We can’t just talk about it. We have to act.”

Pope Francis endorsed JRS’ Global Education Initiative, which raises awareness about the worldwide refugee crisis, last November, and encouraged the agency to double the number of refugees educated by 2020.

“Offering an education is about much more than dispensing concepts. It is something which provides refugees with the wherewithal to progress beyond survival, to keep alive the flame of hope, to believe in the future and to make plans,” Pope Francis said at the time. “To give a child a seat at school is the finest gift you can give.”

Harris said JRS is doing the “heavy lifting” with the concert series, which starts Oct. 6 in Boulder, Colorado, before making stops in Kansas City, Missouri, and Lincoln, Nebraska, and continuing in St. Louis, Milwaukee, Chicago, Toronto, Boston, New York, Philadelphia and Washington. The performers grab a guitar and a chair, sit in the round, sing tunes, tell stories and educate their audience a bit on the refugee situation.

“I think everyone has a real opportunity to open up their hearts,” Harris said. “We are all in this together. What’s happening with these displaced people is going to affect what happens here in this country. If we don’t deal with this now and give these people a chance for love and compassion, a chance for a better life, who knows what they will turn to in desperation?”

She added that without “love instead of hate,” the world “can turn into a dark place unless we put the energy, the time and the money to helping. Ultimately, we’re going to pay a price for that. We should be doing it just because it’s the right thing to do,” Harris said, instead of “sweeping it under the rug and saying it’s not our problem. It is our problem.”

PREVIOUS: The battle over gun regulation returns to the election season

NEXT: Iconographer’s curiosity about God led to growing her faith through art