N. Carolina bishop calls all to pray for peace and justice in Charlotte 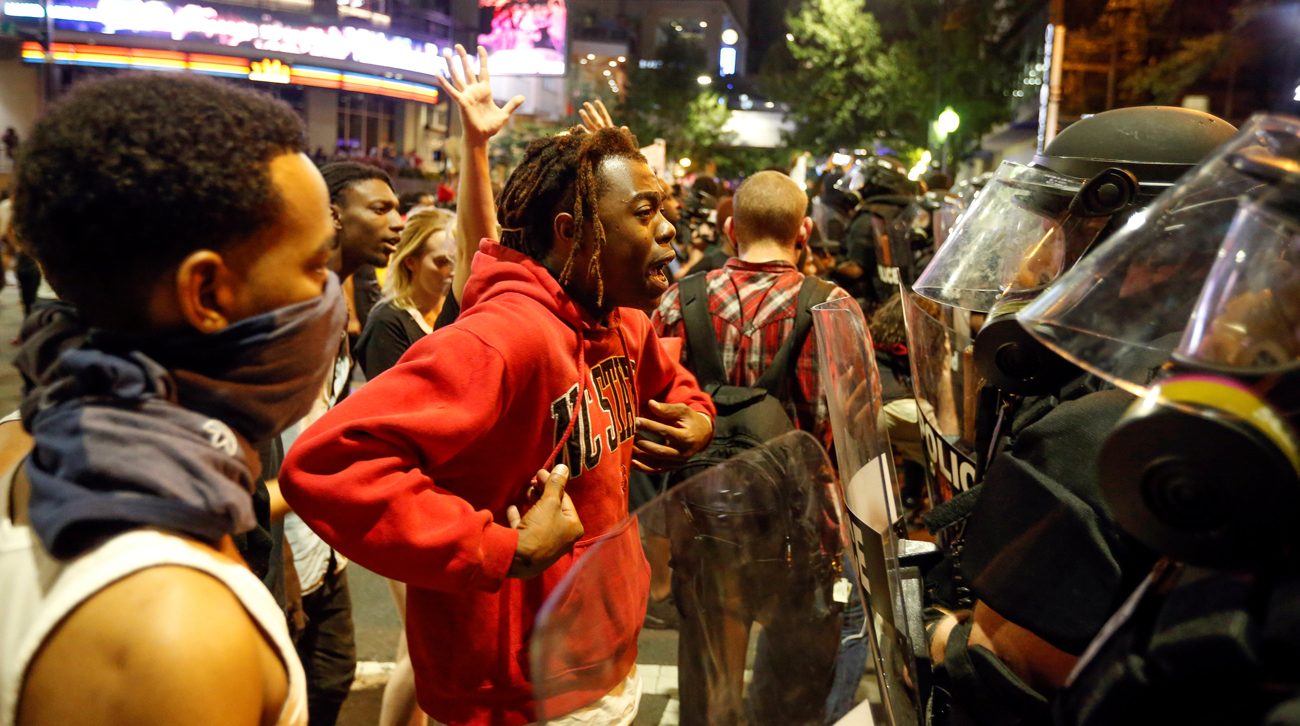 CHARLOTTE, N.C. (CNS) — After two nights of violence in Charlotte, Bishop Peter J. Jugis called on men, women and children in the Diocese of Charlotte to join him in prayers for “peace and justice” for all victims of violence and for law enforcement personnel who have been victims of “unjust violence.”

“Let us pray for all men and women of good will to be instruments of harmony and the always-shining light of Christ in our neighborhoods, workplaces, schools and public places,” the bishop said in a statement Sept. 22.

The protests late Sept. 20 and Sept. 21, with the crowds swelling at one point to 1,000 people, followed the fatal police shooting of 43-year-old Keith Lamont Scott, an African-American, outside an apartment complex the afternoon of Sept. 20.

Charlotte-Mecklenburg police said while they were trying to serve a warrant on another person in the area, Scott approached them from his parked car carrying a handgun and ignoring their calls to drop it.

In their statement, police said Officer Brentley Vinson, who also is an African-American, perceived an “imminent deadly threat” and shot Scott. Scott later died at a local hospital.

Family members insisted that Scott was unarmed and was reading a book while waiting in the parking lot to pick up his son from a nearly school bus stop. Police said they recovered a weapon from the scene, not a book.

Vinson has been placed on administrative leave while police conduct an investigation that includes eyewitness interviews and review of police video footage.

When Scott family members took to social media to criticize police the evening of Sept. 20, people began to gather at the site of the shooting. By 11 p.m., the protest had swelled to about 1,000 people.

When some protesters began throwing rocks and smashing the windows of several police cars, police used tear gas to disperse the crowd, but people continued to protest and block two roadways and, at one point, a nearby segment of Interstate 85, until early morning Sept. 21.

Police arrested one person. More than a dozen police officers were slightly injured in the melee. Local television video also showed a few people looting and burning the cargo of a semi-truck that had stopped on the Interstate.

Protests turned violent for a second night Sept. 21 in uptown Charlotte, about 10 miles away from the site of the fatal police shooting, with several people injured and several businesses vandalized and looted. One person was reportedly shot and critically injured by another civilian. He was listed as being on life support at a local hospital.

Charlotte-Mecklenburg police again used tear gas to try to clear the crowd, some of whom tried to block a section of Interstate 277 as they departed the protest area.

“My heart bleeds for what is going on right now,” said Gov. Pat McCrory, who declared a state of emergency late that night after a request from Charlotte-Mecklenburg Police Chief Kerr Putney. The emergency notice triggered the North Carolina National Guard and the State Highway Patrol to assist local law enforcement in responding to the violence.

At a news conference Sept. 22, Putney said he would allow the family to view the footage, but it would not be released to the public.

At St. Thomas Aquinas Catholic Church, just a few blocks from the scene of the police shooting and the protests there, about 150 people gathered Sept. 21 to pray for peace.

During the evening eucharistic adoration and benediction, Father Patrick Winslow, pastor, offered prayers for police and for people who have suffered injustice, as well as prayers for his neighborhood and the city of Charlotte.

“Last evening we were all taken by surprise when two events collided here in Charlotte — you could even say, in our own backyard,” Father Winslow said. “One, the national ongoing concern about racism in law enforcement and, two, the incident of an African-American man who lost his life in an altercation with local police.”

“In times such as these, it is good to recall that light shines in the darkness, and it must shine through you,” Father Winslow urged parishioners. “Knowing the genuine spirit of our parishioners, I am confident that you will embrace a path of peace, prayer and charity.”

History makes it clear, the priest said, that the light that vanquishes the darkness is not on the battlefield between nations or races, or “in the streets of Charlotte or any U.S. city.” “The true battlefield is within the human heart — within each of us,” he said.

“Injustice must be defeated” in the heart, the priest said. “This is where prejudice and unjust discrimination live. This is the place from which fear and darkness enter the world. And likewise, it is the place where it can be vanquished.”

He urged people to “storm and loot your hearts, not the streets, if you want true change for the good. Vanquish the enemy within and then you will truly help your neighbor.”

PREVIOUS: Despite drop in poverty, advocates say much work remains to lift up poor

NEXT: Retired Archbishop Gerety of Newark dies at 104