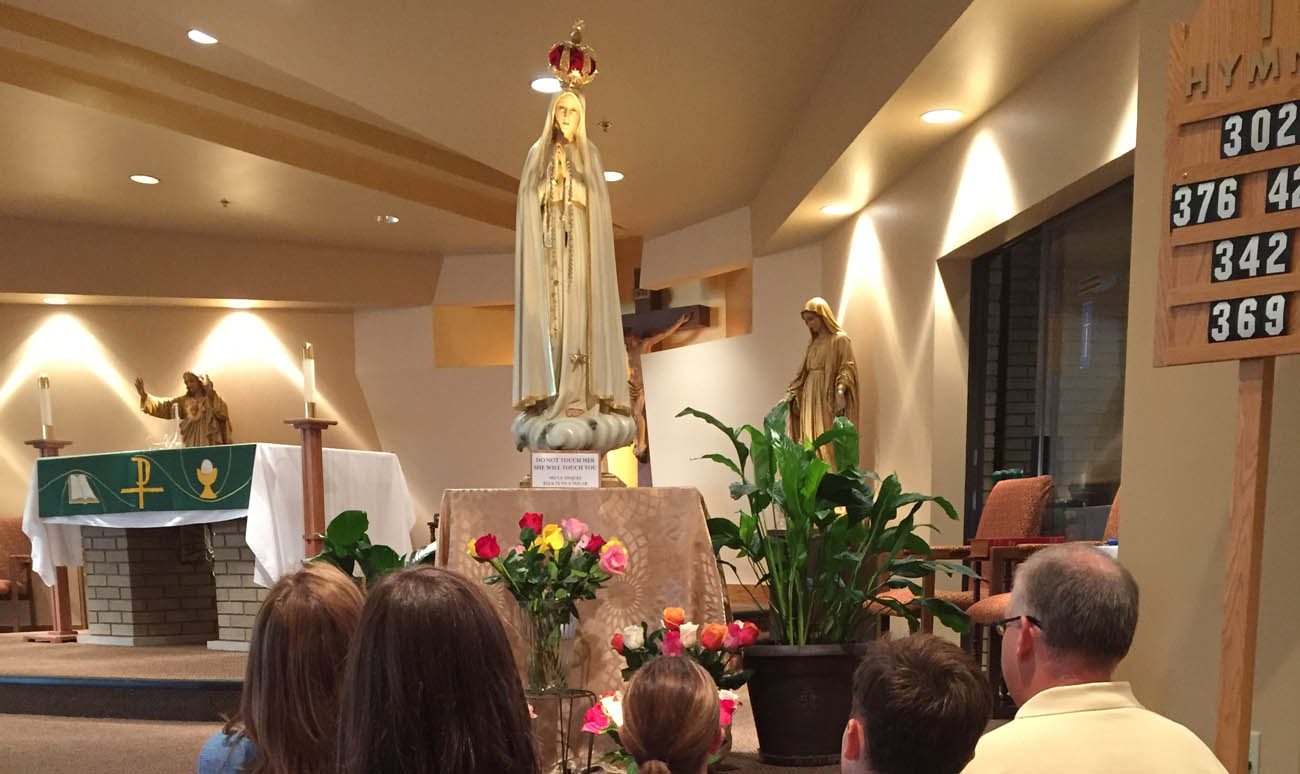 The Reynold family prays the rosary before the traveling pilgrimage statue of Our Lady of Fatima Aug. 21 in St. Paul Church in Sellersburg, Ind. They are Elizabeth, left, Barbara, Rebecca, Anna Kate, William and Joseph. (CNS photo/Natalie Hoefer, The Criterion )

SELLERSBURG, Ind. (CNS) — As the rosary was prayed aloud, 16-year-old Rebecca Reynolds knelt with her parents and three siblings near the altar of St. Paul Church in Sellersburg. Her eyes were turned upward toward the illumined statue of Mary.

She described the experience as “emotional.”

“I felt like she was actually with us while I was praying,” she said. “It was a once-in-a-lifetime experience.”

It was not just any statue that Rebecca and her family venerated. It was the traveling pilgrim statue of Our Lady of Fatima, a twin to the statue at the shrine in Fatima, Portugal, where Mary appeared six times to three shepherd children in 1917.

The statue is on a nearly two-year mission, from March 2016 through November 2017, to all 50 states in anticipation of the 100th anniversary of the final apparition of Mary at Fatima Oct. 13, 1917. The journey is called the “Tour for Peace.”

It is one of two statues commissioned in 1947 with the purpose of bringing the message of Fatima to the world. It was blessed in 1947 by the bishop of Fatima, and later by Pope Pius XII. It has been traveling for almost 70 years.

“The statues were commissioned for the millions of people who may never have the chance to go to Fatima in Portugal,” said Patrick Sabat, the statue’s custodian and tour coordinator. “Our Lady of Fatima comes to us.”

“I think this beautiful country, the United States, could lead this world to peace by means of prayer, penance and conversion, which is the message of Fatima,” Sabat told The Criterion, newspaper of the Archdiocese of Indianapolis. “The goal is to make it to 100 dioceses. As of now we already have 90 scheduled, so we’re very close to making that goal already.”

Rebecca and her family are members of St. John Paul II Parish. They visited St. Paul specifically to see the traveling pilgrim statue.

“Nothing big ever happens in little Sellersburg,” said Rebecca. “This is just amazing.”

Charles Whittaker, a fourth-degree Knight of Columbus, processed into the church with the statue. He said it was an honor to participate in the event.

“The (shepherd children) got to see how beautiful (Mary) was,” said Whittaker, a member of St. Augustine Parish in Jeffersonville. “We … felt her presence, and just that was beautiful.”

When asked about the statue, Father Thomas Clegg, pastor of St. John Paul II Parish, said it was “a great honor” to host it, and gave credit to parishioner Phyllis Burkholder for making the statue’s visit possible.

She said she got information from the World Apostolate of Fatima about the statue going throughout the U.S. as part of a world tour. Burkholder found out it would be in the Archdiocese of Indianapolis, “so I asked if she could come here.”

“I think people are really thrilled about seeing her. You can see that in their expressions and in their piety, praying before Our Lady,” she said.

Such prayer is precisely what Our Lady of Fatima called for, said Sabat during a talk he gave in the church.

“She said this prayer will bring peace. The Blessed Mother, the Queen of Peace, has said, ‘There will be peace if you do what I ask.’ That’s why the church calls it the ‘peace plan from heaven.’ ”

Sabat shared how on May 5, 1917, after several years of violence and death during World War I, Pope Benedict XV wrote a letter asking Catholics to invoke the name of Mary for peace. He declared that a new name would be added to the end of the “Litany of Loreto”: “Our Lady, Queen of Peace.”

But the message Mary declared was not just for the people of Portugal, nor just for the circumstances of that time, he explained.

Turning to Jesus through Mary will result in peace, said Sabat.

“Those simple requests for prayer, penance and conversion, our consecration to her Immaculate Heart, to save souls, is the most important thing to do today to bring about the peace she promised,” he said.