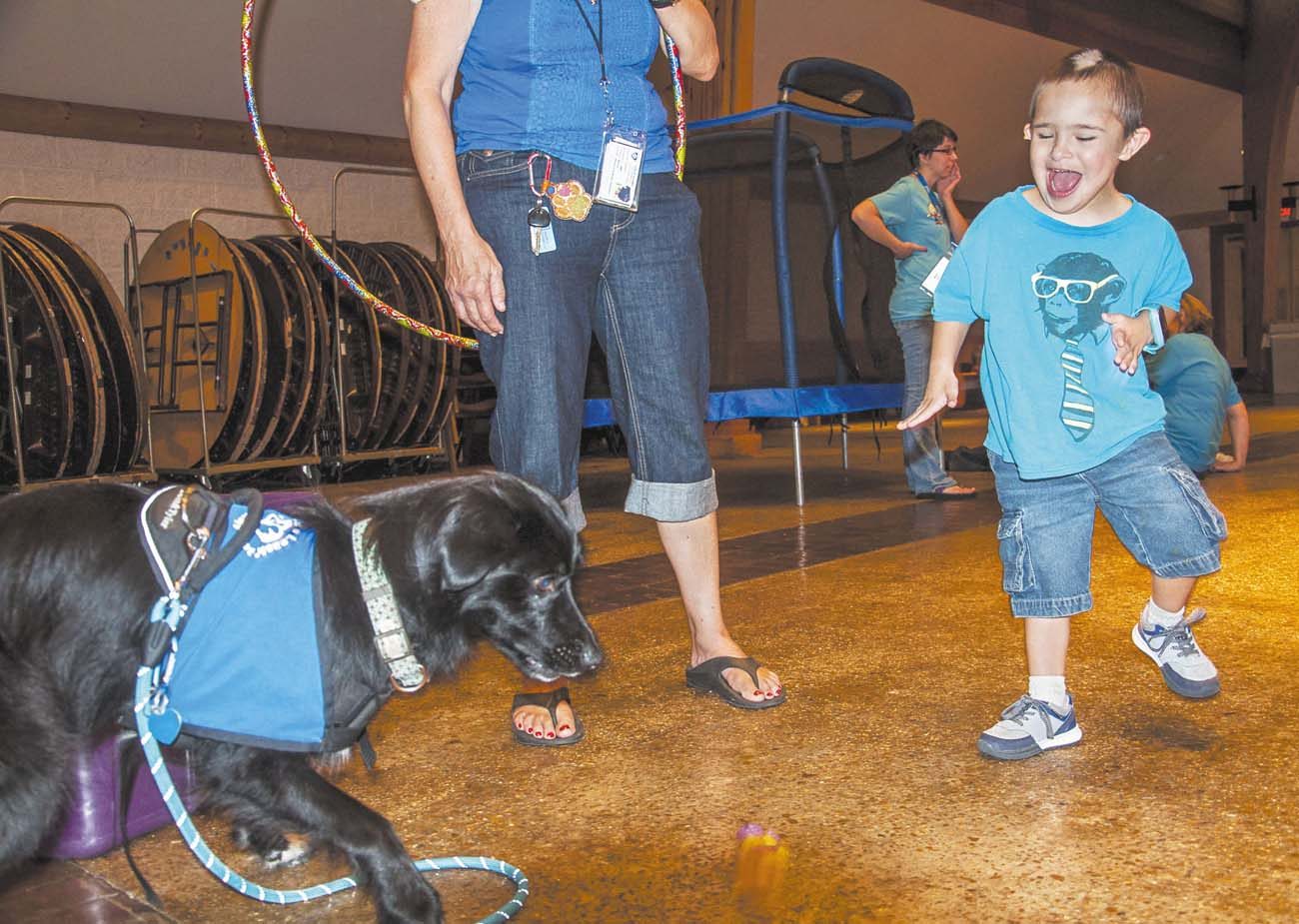 Buddy Break VIP Isaac Schueler cheers after throwing the ball for Mannie, a therapy dog during Buddy Break Aug. 19 at St. Stephen Church in Old Hickory, Tenn. Buddy Break, free childcare for children with special needs and their siblings, gives parents and caregivers a much needed break. St. Stephen is the first Catholic parish in the country to host Buddy Break, which is part of the national non-profit organization Nathaniel's Hope. (CNS photo/Theresa Laurence, Tennessee Register)

OLD HICKORY, Tenn. (CNS) — As St. Stephen Church parishioner Holly Weatherford waited to drop her two children off at Buddy Break, she was “nervous, anxious, but excited too.”

Caring for her son Grant, 7, who has autism and is completely non-verbal, is a challenging task, and she rarely gets a night off. “On average, me and my husband go out three times a year. … You can’t just call up any sitter. They would be lost.”

That’s why Weatherford was so grateful for the opportunity to take her son and older daughter at St. Stephen and enjoy a well-deserved break. Buddy Break gives parents such as Weatherford a rare chance to focus on self-care and spousal relationships while knowing that trained volunteers take care of the children. “It gives us time to reconnect,” she said.

“It’s such a godsend,” said Jean Putthoff, after dropping off her son Jonathan, 11, who has Down syndrome, at Buddy Break. “There is support out there,” she said, “but not a lot of respite care where you can say, ‘Here, take my child’ and they’ll know what to do.”

St. Stephen has offered six Buddy Break nights since bring the program to the parish. Programs are hosted the third Friday of each month.

Buddy Break falls under the umbrella of a national nonprofit organization Nathaniel’s Hope, which was founded by Tim and Marie Kuck in 2002 after their son died because of complications from multiple birth anomalies. More than 150 churches nationwide offer Buddy Break programs, but St. Stephen is the first Catholic parish to offer the ministry.

Greg Karn, director of religious education at St. Stephen, heard about Buddy Break from a nearby church that was offering the program and wanted to bring it to the parish. Raised by parents who had big hearts for children with special needs, Karn inherited that same concern.

“The catechetical aspect is one side of it, and the other is respite. They can work together,” Karn said.

St. Stephen, a large suburban parish with about 1,500 registered families 16 miles east of Nashville, makes every effort to accommodate all children with special needs into religious education classes so they can receive the sacraments and be part of parish life. On the respite side, Karn said, is Buddy Break. “If we can make one night better for one family, that’s a home run.” 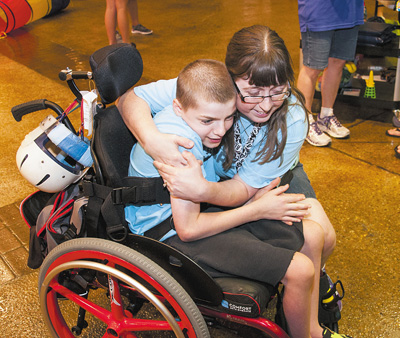 Buddy Break volunteer Rebekah Layne greets VIP Noah Ankey with a hug. At Buddy Break, which offers respite for parents, each VIP child is assigned one buddy to stay with them for the entire evening to ensure they are safe and having fun. (CNS photo/Theresa Laurence, Tennessee Register)

After Karn’s attempt to start a Buddy Break program at St. Stephen stalled, new parishioners Jerry and Wen Marcec offered to help reboot the effort. Jerry, who has a brother with Down syndrome, and Wen, who worked with public school children with Down syndrome and autism, have devoted hours to organize the program.

About 50 volunteers are needed to care for all the children, or VIPs, as they are referred to during Buddy Break. Siblings of children with special needs are also welcome during the evenings. Each child has a personal caregiver or “buddy” for the entire night to ensure that they are safe and having fun. High-need children will have two buddies assigned to them.

“So far we haven’t had to turn anybody away,” Wen Marcec said.

In addition to rounding up committed volunteers, the Marcecs must ensure that the activities are set up and ready to go. In St. Stephen’s former church space, children can have their face painted, jump on a trampoline, interact with therapy dogs, or run around to get some energy out. In another building, classrooms are transformed into hubs of activity featuring arts and crafts, musical instruments, board games, trains, building blocks and more. A separate quiet room allows children a place to go if they need to get away from the noise and excitement.

Karn and the Marcecs would like to see Buddy Break expand to more parishes in the Diocese of Nashville, and are willing to share their experiences with other parish leaders who are interested. “Families could get more than one break a month and it would relieve that pressure,” Wen Marcec said.

Once a family registers for Buddy Break, they are entered into Nathaniel’s Hope national database system and can attend Buddy Break anywhere in the country.

“Jesus said, ‘Let the children come to me.’ These children especially need his touch, and if we can give that to them, it’s a blessing,” Wen Marcec said.

Laurence is a staff writer at the Tennessee Register, newspaper of Diocese of Nashville.

NEXT: USCCB leaders call on Catholics to join in praying for care of creation