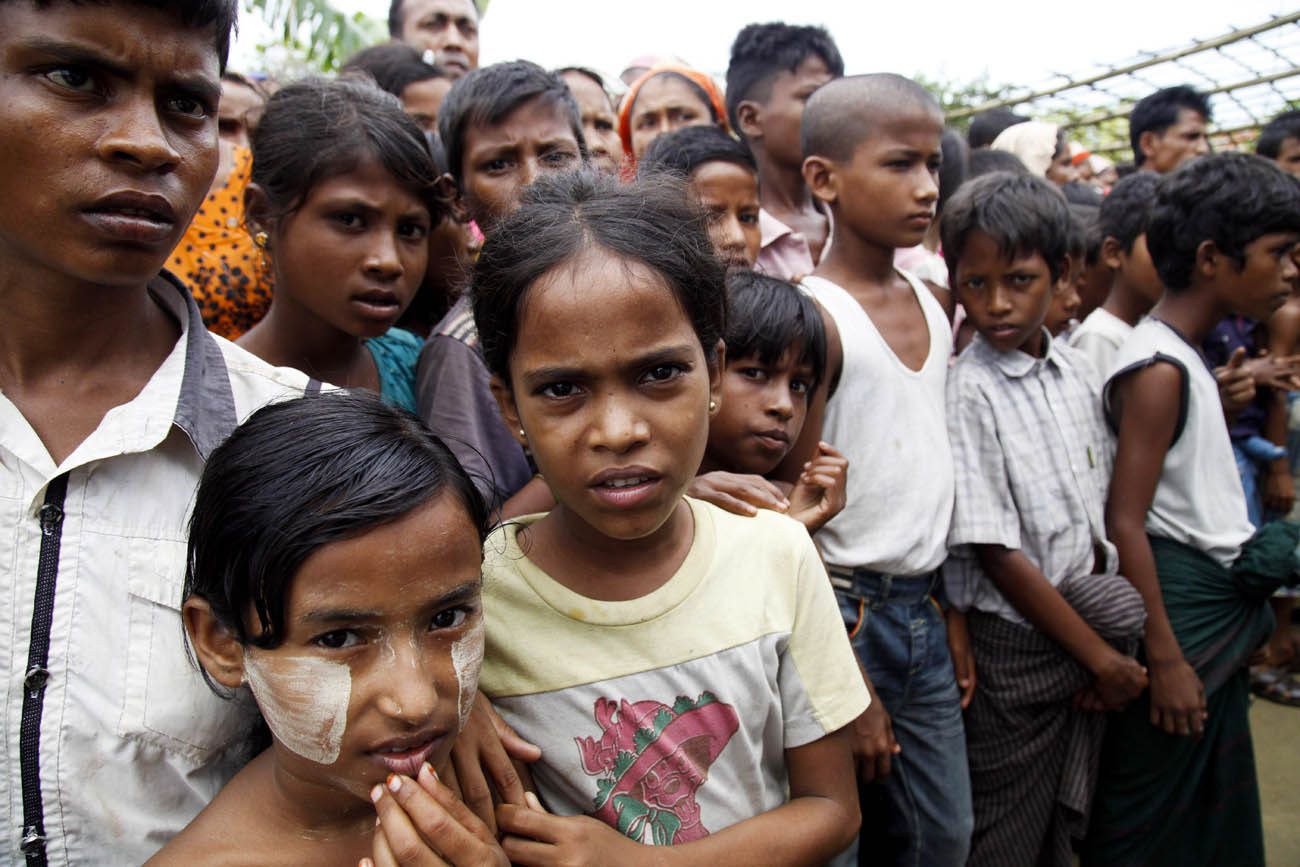 Young people displaced by violence are seen Sept. 7 at a camp in Sittwe, Myanmar. If the world's "displaced" people, both refugees and internally displaced people, were counted as one country, those 65 million people would place 22nd on the world rankings, between France and the United Kingdom. (CNS photo/Nyunt Win, EPA)

WASHINGTON (CNS) — If the world’s “displaced” people — both refugees and internally displaced people — were counted as one country, those 65 million people would place 22nd on the world rankings, between France and the United Kingdom.

What then does a country without refugees do about those countries where refugees have fled because of war, economics, natural disasters, terror, religious or political oppression, or the threat of starvation?

In mid-September, President Barack Obama said the United States would increase the number of refugees it settles, from 85,000 to 110,000 in fiscal year 2017, beginning Oct. 1 — a move that was, predictably, lambasted by his political opponents in Congress.

Even the increase, if it actually happens — Obama won’t be president next year — represents just 1.77 percent of all currently displaced people in the world, or 0.35 percent of the U.S. population of 325 million.

Resettling a group of people roughly the same size as the population of Peoria, Illinois, or Lansing, Michigan, has become yet another hot-button issue in a political season filled with them.

Pope Francis appealed last year for every parish, religious community, monastery and shrine in Europe to take in a family of refugees. And he backed up his words with actions, as a family of four from Damascus, Syria, was taken in by the Vatican’s St. Anne Parish in Rome. The pope also washed the feet of refugees on Holy Thursday this year, invited Syrian refugees to lunch, and in April visited the Greek island of Lesbos, which has become inundated with refugees over the past year.

The U.S. bishops, in their quadrennial “Forming Consciences for Faithful Citizenship” statement, put refugees under the general heading of migration.

“The Gospel mandate to ‘welcome the stranger’ requires Catholics to care for and stand with newcomers, authorized and unauthorized, including unaccompanied immigrant children, refugees and asylum-seekers, those unnecessarily detained, and victims of human trafficking,” it says, adding that reforms should include “refuge for those fleeing persecution and violence; and policies to address the root causes of migration.”

The Democrats’ platform makes its case succinctly: “The world is experiencing a major refugee crisis with more than 60 million people displaced as a result of conflicts in the Middle East, Africa and Eastern Europe. We support President Obama’s call for an international summit to address this crisis so that every country assumes its responsibility to meet this humanitarian challenge.”

That summit was held Sept. 19-20 at the United Nations. By the end of it, world leaders who participated in the gathering committed to accepting 360,000 refugees from war-torn areas over the course of 2017.

The Republicans’ platform treats the refugee issue this way: “”From its beginning, our country has been a haven of refuge and asylum. That should continue — but with major changes. Asylum should be limited to cases of political, ethnic or religious persecution.”

It added, “As the director of the FBI has noted, it is not possible to vet fully all potential refugees. To ensure our national security, refugees who cannot be carefully vetted cannot be admitted to the country, especially those whose homelands have been the breeding grounds for terrorism.”

The Democrats counter with: “While Donald Trump proposes banning Muslim refugees, we will look for ways to help innocent people who are fleeing persecution while ensuring rigorous screening and vetting.”

Trump, the GOP nominee, has spoken negatively on the campaign trail of the “influx of Syrian refugees” and has called for “extreme vetting” for all refugees.

It would be tough for vetting to be more extreme than the current protocol, according to Migration and Refugee Services executive director Bill Canny at the U.S. Conference of Catholic Bishops.

“It’s a pretty detailed, rigorous process. There are, I believe, some 13 steps,” Canny said, to prove that refugees “do not pose a security risk. It’s quite extensive. I believe it’s the most extensive review of a person coming to the United States. … As people examine this over the last months, everyone, for the most part, the vast majority who have examined this are quite happy with the rigorous vetting that takes place.”

Canny told Catholic News Service, “We think Americans want to save human beings who are in distress. We think our faith community is very keen to not let people languish in horrible conditions. We have a great sympathy for people who are victims of war. We continue to see the American people and American Catholics open their arms to refugees who have been traumatized and persecuted in many situations around the world.”

He voiced his belief that the United States will be able to increase its capacity to settle more refugees. “All of those systems have shown a capacity to increase in the past year,” he said. This year’s 85,000 figure is up from last year’s 75,000.

Pat Winn, who works in refugee resettlement for the Diocese of Rockford, Illinois, said it could be a tougher job at the local level. His diocese typically can settle 350 refugees a year.

“To a degree, we plan for it and we document what it is we can provide. The USCCB comes back to us and tells us what we can do,” Winn said. “If the USCCB calls and asks can we take 370, we could probably figure out a way to do it. If they call and say can you take 570, we’d have to probably say no,” based on the time and training it would take the diocese to increase its own capacity.

The ongoing plight of Syrian refugees is what makes headlines, but this year, the Diocese of Rockford has resettled people from Myanmar, India, East Africa, Iran, Iraq and Afghanistan as well as Syria. “We really cover the waterfront,” Winn said.

Lest anyone think refugees had somehow exaggerated their situation, Winn put that suspicion to rest. “Our folks have seen some of the worst conditions,” he told CNS. “They all qualified as refugees because they feared for their life or health.”

MRS’ Canny told of a recent visit he had made to Lincoln, Nebraska, where he had met one family from Iraq that stood out in his mind.

“The children were anxiously learning English and attempting to pronounce new English words in order to be part of our culture. The father was trying with another refugee to open a small car mechanic business,” he said.

“His willingness to get out and work immediately as a mechanic and to even have goals of some small business ownership, this was for me was a picture of people who had suffered, who had been persecuted or had been forced to leave their country, but had displayed an enormous amount of courage in trying to acculturate to this country.”

It’s hard work for the Rockford diocesan staff of 11, but they are not made callous or unfeeling by the work. Winn said nine of the 11 came to the United States as refugees themselves.

As Winn says, “We like to do it not because they’re (refugees) Catholic, but because we’re Catholic.”