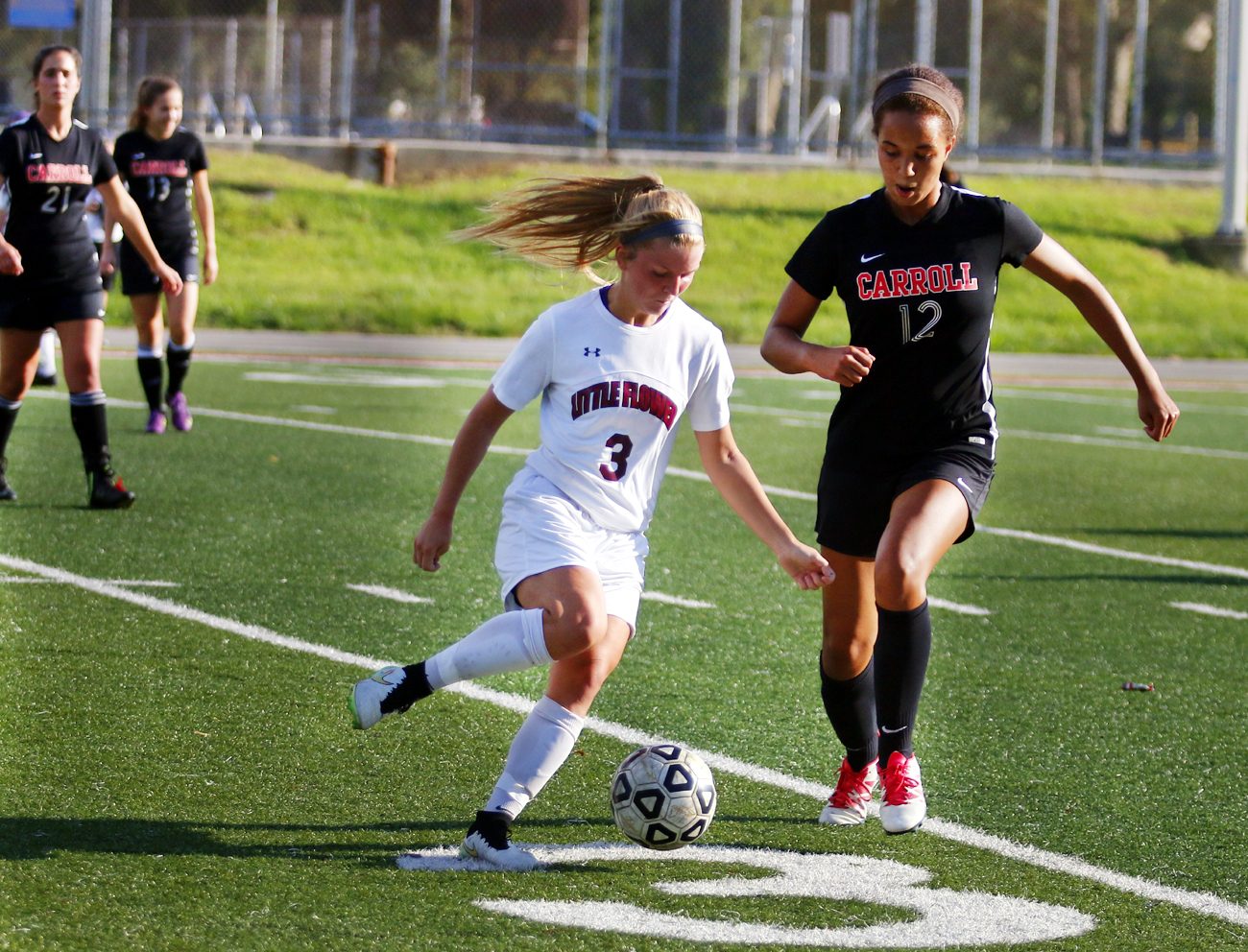 Little Flower senior Cailey Plath takes control of the ball during the October 3 home game against Archbishop Carroll. Plath scored three of the four goals leading to a shut out .

The boys’ soccer season has reached its halfway mark, and it is safe to state that when the postseason begins on Oct. 18, a number of teams have a more-than-legitimate chance to emerge as Catholic League champions.

That, however, is a little less than three weeks away. In the meantime, several squads are jockeying for the top spot before the regular season concludes.

Through Sept. 27, La Salle remains the only undefeated team. Thanks to a 2-1 victory over Father Judge, the Explorers are now 6-0. A half-game behind the Explorers is 5-0-1 Roman Catholic, the only blemish a 1-1 tie with Father Judge.

Roman and La Salle were scheduled to square off Friday afternoon, Sept. 30. On Tuesday, Oct. 4 Archbishop Wood travels to Father Judge for a key match, the starting time a rare 7 p.m.

“The boys have really bought into the system and continue to improve every day,” said Archbishop Ryan coach Ryan Haney, whose Raiders defeated non-league juggernaut Holy Ghost Prep, 1-0, Thursday night. “I am really looking forward to the next two weeks. We have some great tests coming up.” 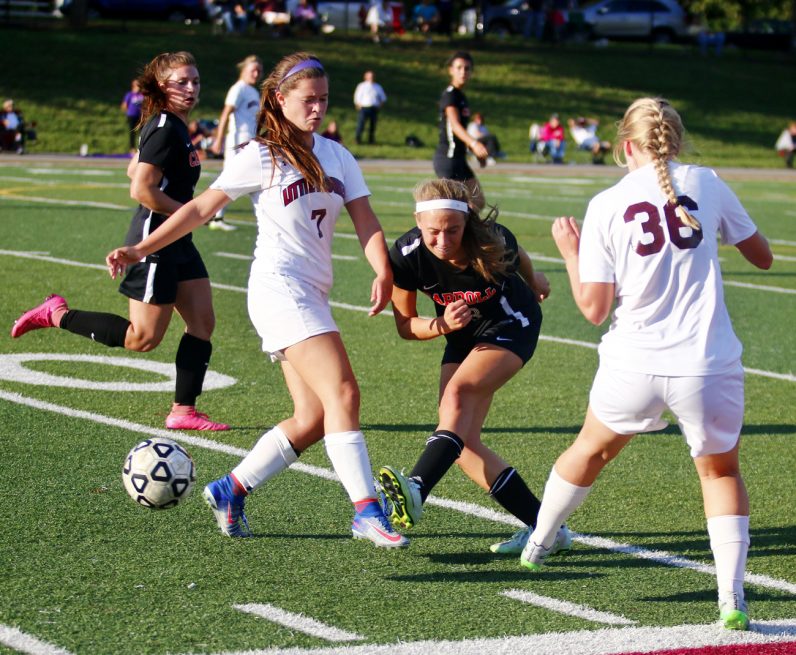 A similar setting describes girls’ soccer. St. Hubert leads the league with a 6-0 record, followed closely by Little Flower, Lansdale Catholic and Archbishop Wood at 5-1. Archbishop Carroll and Archbishop Ryan are both 4-2.

In the Red Division, St. Joseph’s Prep and La Salle are both 2-0. On Oct.22 those two will face each other 2 p.m. at Plymouth-Whitemarsh. In third place at 1-0 is Father Judge, and what a difficult task awaits the Crusaders.

At Northeast High School on Saturday, Oct. 1 at 7 p.m. the Crusaders will meet La Salle. The following week, Oct. 8, they play Archbishop Wood at Northeast High. Six nights later, Oct. 14 at 7:30 p.m. at Widener University, they take on the Prep.

The Blue Division contains less drama. Cardinal O’Hara’s 2-0 record is made even more impressive considering the Lions are 5-0 overall and have outscored their opponents by 181-26. But other squads remain in contention, such as Conwell-Egan. The Eagles bring their 1-0 record to Wissahickon High School 3 p.m. Saturday, Oct. 1 and a meeting with 1-1 Lansdale Catholic.

In Archbishop Wood’s 37-21 victory over Roman Catholic, quarterback Jack Colyar was 10 of 17 for 253 yards and two scores.

With more than half the regular season accounted for and four games remaining, Cardinal O’Hara and Archbishop Carroll are both undefeated at 5-0. On their heels is Bonner-Prendergast (4-1), Archbishop Wood (3-1) and St. Hubert (3-2). On Oct. 5, Wood visits Carroll at 3:45.

Cardinal O’Hara completed a perfect 8-0 regular season. The Lions are followed by Lansdale Catholic (6-2) and Archbishop Wood (5-3). The regular seasons concludes on Oct. 4, and three days later, the playoffs begin.

Archbishop Carroll’s 5-0 start is followed by a huge logjam. Archbishop Wood is in second at 6-1, with Bonner-Prendergast, Cardinal O’Hara and John W. Hallahan tied for third at 5-1.

St. Hubert’s remains in contention at 5-2.

John Knebels can be reached at jknebels@gmail.com or by twitter @johnknebels.

PREVIOUS: Benedictine abbot prayed with Arnold Palmer on his deathbed

NEXT: Ryan Howard shows his Catholic faith on and off baseball field