Ryan Howard shows his Catholic faith on and off baseball field 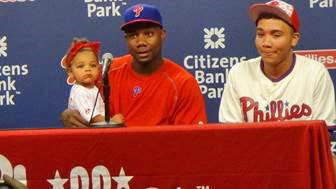 Phillies first baseman Ryan Howard (center) holds his daughter Ariana at a press conference, along with his son Darian, after the Phils’ 5-2 win over the New York Mets Oct. 2 at Citizens Bank Park in Philadelphia. The final game of the 2016 season was likely also the last for Howard as a Phillie. He is a former National League Rookie of the Year (2005) and Most Valuable Player (2006). (Photo by John Knebels)

On Sunday afternoon Ryan Howard had stood amid thousands of fans at Citizens Bank Park before taking the field at first base in the Phillies’ season-ending, 5-2 win over the New York Mets.

About 10 minutes after the game inside the Phillies’ spacious media room, with his sprightly baby daughter, Ariana, fidgeting on his lap and 15-year-old, look-alike son Darian stationed to his left, Howard fielded questions from a throng of reporters.

Sunday’s inquisition, however, was significantly more poignant than simply talking baseball. Ryan Howard, one of the most decorated and popular athletes in the history of Philadelphia, had played his last game for the Phillies. The team will exercise a buyout clause and allow Howard to become a free agent next season.

After being asked to describe his feelings — “Amazing … this will be with me forever” — and assess his future plans — “I’m not ready to retire. There’s still a lot left in the tank” — Howard exited to a series of well wishes from the media audience.

Several minutes later, Howard was perched in front of his well-organized locker. He appeared calm, content and relieved. Several Phillies employees had their picture taken with his typically smiling self.

To his right, second-year pitcher Jerad Eickhoff was being interviewed. Across the room and within earshot, young teammates talked about spring training.

A reporter approached the giant slugger, shook his massive hand, and thanked him for being such a splendid role model since gracing Major League Baseball as a September 2004 call-up. Howard responded with a sincere “thank you” — replete with genuine eye contact. Before leaving, the reporter asked Howard a question that no one had broached earlier.

“If it’s not too personal, do you mind talking about your faith?” Howard was asked.

“Not at all. It’s a very important part of who I am,” he replied.

Turns out that Howard, a private individual despite his willingness to engage in dialogue about pretty much any fundamental topic, is a lifetime member of the Catholic faith. As a youngster growing up in St. Louis, Missouri, Howard attended a Catholic elementary school for several years until his family moved away. He received his sacraments of initiation while in public school.

Since becoming entrenched as an essential ingredient of arguably the most accomplished team in Phillies history — one that included five consecutive division crowns from 2007 through 2011, two trips to the World Series, and of course, the surreal night of Oct. 29, 2008, when the franchise captured its second-ever World Series — Howard has been a community fixture, donating countless time and money to various charities and projects, particularly those that involve children.

In 2012 he married Krystle Campbell, a former Philadelphia Eagles cheerleader and parishioner at Epiphany of Our Lord Parish in Plymouth Meeting. Howard and his family regularly attend either Epiphany or St. Helena Church in Blue Bell.

Howard admits his celebrity status can potentially get in the way of worship, but he has become accustomed to the gawking and soft whispers that emanate from the congregation.

“I don’t look at it as being rude,” Howard said. “I understand that people mean well. They’re not trying to bother me and most of them are really nice and respectful.”

Most of Howard’s teammates adhere to a Christian faith. It’s rare to find a practicing Catholic in the locker room, but acknowledging one’s religion and playing professional baseball are not necessarily separate concepts.

“When you put your faith in Jesus, it’s nothing to hide from,” said Howard, speaking in a reverent tone. “Sometimes it might be difficult to put into words. Sometimes it’s easier to show your faith by your actions.”

Like most celebrities whose occupation is fodder for unfounded negativity and speculation, Howard has had to traverse mean-spirited scrutiny. Throughout a stardust-filled career highlighted by Rookie of the Year honors in 2005, a Most Valuable Player Award in 2006, all-star selections in 2006, 2009 and 2010 and a single-season, franchise-best 58 home runs in 2006, Howard has faced constant criticism and second guessing.

He strikes out too much. His batting average is too low. His defensive shortcomings are deflating. He doesn’t come through in the clutch enough. He swings at too many pitches out of the strike zone. He can’t hit an off-speed offering. He hasn’t been the same player since rupturing his Achilles tendon in his final at-bat against the St. Louis Cardinals that ended the Phillies’ season in the first round of the 2011 playoffs.

Such condemnations are a matter of opinion, and Howard, though strong of mind, body and spirit, is not constructed of Teflon. Words can hurt, and they occasionally do.

Appeasing and forgiving angry fans, however, pale in comparison to real-life trauma. A since-settled lawsuit involving trusted family members made headlines in 2014. Earlier this year, a since-debunked report in Al Jazeera linked Howard and several other players to steroid use.

Howard opts not to discuss personal issues that border on, and surpass, incredulity. He does, however, rely on his faith while enduring life’s awful chapters.

“We all have challenges, no matter who you are and what you do,” Howard said. “I try to look at things positively. I’ve been very fortunate, and very blessed. I have tried to use my God-given talents to the best of my abilities.”

Among the media, Howard has secured a reputation as balanced, cordial and respectful. Whether having hit two home runs in victory or striking out thrice in defeat, Howard answers questions from reporters with a similar countenance.

Howard also maintains an exemplary reputation as a teammate.

“I never felt uncomfortable being able to go to him and talk to him about anything,” said Tommy Joseph, who replaced Howard at first base to begin the ninth inning, igniting the CBP crowd of 36,935 to a long, thunderous standing ovation, the last — and loudest — of six on the day. “That guy is a special player and a special human being.”

NEXT: Archbishop Carroll extends winning ways on the volleyball court