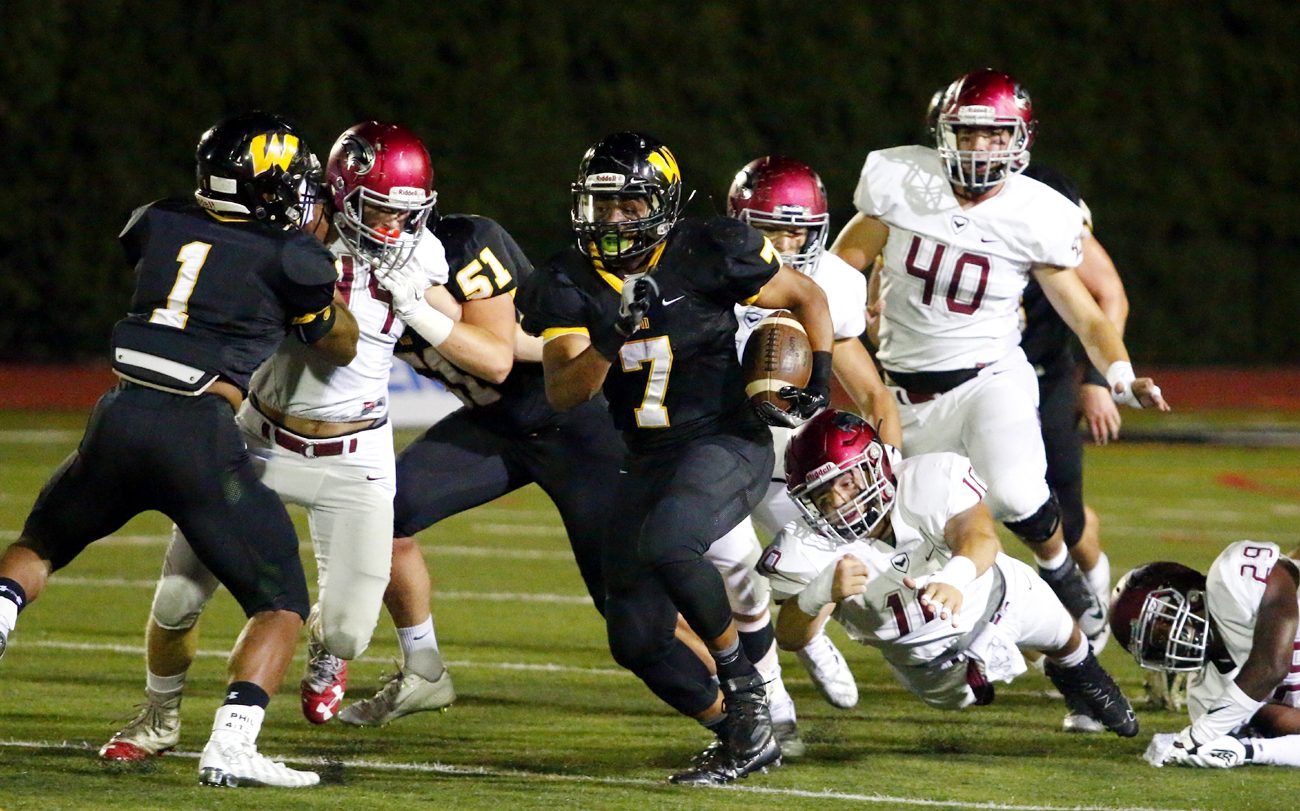 Archbishop Wood senior running back Shawn Thompson breaks through a hole for a gain. (Sarah Webb) 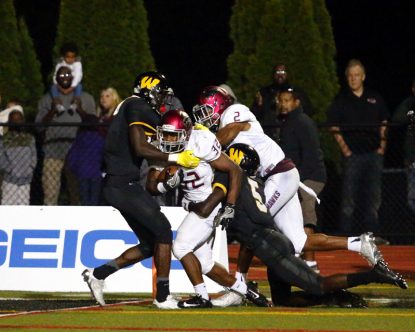 The Prep’s Christian Waller pushes through defenders to score a touchdown. (Sarah Webb)

Chris Lowndes slowly strolled toward the locker room, about 100 yards away from the football field.

Minutes earlier, the St. Joseph’s Prep senior had helped the Hawks topple Archbishop Wood, 43-24, in a nationally televised Catholic League opener Sept. 16 at William Tennent High School. It wasn’t difficult to understand why his opinion would be summoned, because on defense, it seemed as though Lowndes was everywhere.

Bone-jarring tackles, several for losses. A key fumble recovery. Constant harassment of Wood’s talented skilled players. If ever a football player was hoping to make a statement, Lowndes had done just that.

Asked to answer a few questions despite being bruised and fatigued, Lowndes didn’t mind. He also didn’t mince words.

“We just get the job done,” said Lowndes. “It really doesn’t matter where or when, or who we’re up against.”

The Prep’s effort against Wood necessitated a different kind of effort this past Saturday night. Against Archbishop Carroll at Widener University, the Hawks needed to quickly forget about its signature victory over Wood.

The Hawks did just that. Behind a 35-0 halftime lead that allowed for a running clock over the past two quarters, the Prep defeated Carroll, 42-6.

But even after beating Carroll, people were still talking about the Wood game, a see-saw affair until the Prep pulled away in the final stanza.

After Wood had taken a 7-0 lead early in the first quarter, and playing without senior standout D’Andre Swift, injured during the Prep’s first offensive series, thoughts of an upset undoubtedly settled among sections of the overflow crowd.

“There wasn’t anything to worry about,” said Lowndes. “Just continue to do our thing. Fight and play aggressive football. Philly football.”

Because the Catholic League champion is now determined by its regular-season record, the Prep-Wood contest was a pseudo playoff game.

In the Red Division, the Prep, Wood, La Salle, and Father Judge have emerged as title favorites. Wood, therefore, now faces a near-impossible climb to being crowned kings of the Red Division.

As for the PIAA state tournament, that is an entirely different story, and one that was irrelevant on this particular night.

Because of ESPN’s need for television timeouts, and aggravated by a constant flow of penalties on both sides, the game took a staggering three hours, 15 minutes to complete. In between, both squads lost several combined touchdowns to an official’s whistle, or else the score would have been much higher.

“Wood’s a good team,” said senior Richard Carr. “We knew that going in. We knew we would have to play our best, but really, we should be playing our best all the time.”

If anyone had deemed Carr as an unofficial Most Valuable Player, it would have been difficult to argue. On offense, Carr threw a touchdown pass to junior quarterback Marquez McCray off a trick play and later caught a TD pass; on defense, he made life difficult for Wood senior star receiver Mark Webb, holding him to just one reception.

Carr admitted that the magnitude of the spotlight “most probably” influenced the numerous sloppy stretches unbefitting of area powerhouses.

“It started out real slow for both teams,” said Carr. “I think that played a big part to the game being on ESPN. Teams try to play perfect. Try not to make mistakes. Look good for the camera.”

Despite neither team forging enough of a margin to feel comfortable until halfway through the fourth quarter, Prep junior linebacker Zach Snider remained confident when the Hawks trailed 7-6 after one quarter and 17-12 late in the second.

He was also annoyed.

“It was the worst first half we’ve played all year,” said Snider. “At least we know that we still have a lot to work on. At halftime, we stayed calm and did what we had to do.”

“No matter who we’re playing, we come out and get the job done,” he said. “League, non-league, really doesn’t matter. We work so hard during the week that when it comes time to play, we can’t wait to get started. It’s a very special team.”

Those who figured that the game would be a defensive struggle figured wrong. After Colyar’s TD, the Prep took a 12-10 lead with two touchdowns via a niftily designed 12-yard pass from Carr to quarterback McCray, and a 25-yard jaunt by senior Christian Waller.

Wood, which bounced back this past Friday to stop Roman Catholic, 37-21, responded with a 36-yard field goal by senior kicker Dan Zanine early in the second quarter that cut the Vikings’ deficit to 12-10, and a 12-yard strike from Colyar to senior Shawn Thompson that put Wood back in front at 17-12.

Undaunted, the Hawks responded with a 36-yard touchdown connection from McCray to Carr and a subsequent same-method two-point conversion toss just 18 seconds before halftime, and the Hawks led, 20-17.

After a safety increased the Prep’s edge to 22-17, McCray scored on a one-yard keeper early in the fourth quarter. A 46-yard touchdown pass from Colyar to junior tight end Kyle Pitts trimmed the margin to 29-24, but a Terrence Greene nine-yard scoring run (on his only carry of the night) and a 55-yard bolt by Waller sealed the victory.

The soft-spoken Waller’s two-touchdown, 131-yard effort increased his season total to 336 on 44 carries. McCray’s 11 completions in 24 attempts went for 134 yards. Greene, a senior, caught five for 60 yards. For the Vikings, Thompson and senior Raheem Blackshear combined for 161 yards rushing on 20 carries. Hassled often, Colyar completed seven of 21 passes for 113 yards and two scores.

Carr lauded his team for responding to the challenge without relying on Swift.

“We have a lot of good players that nobody really knows about,” said Carr. “Our system is always ‘next man up.’ People are ready to go.”