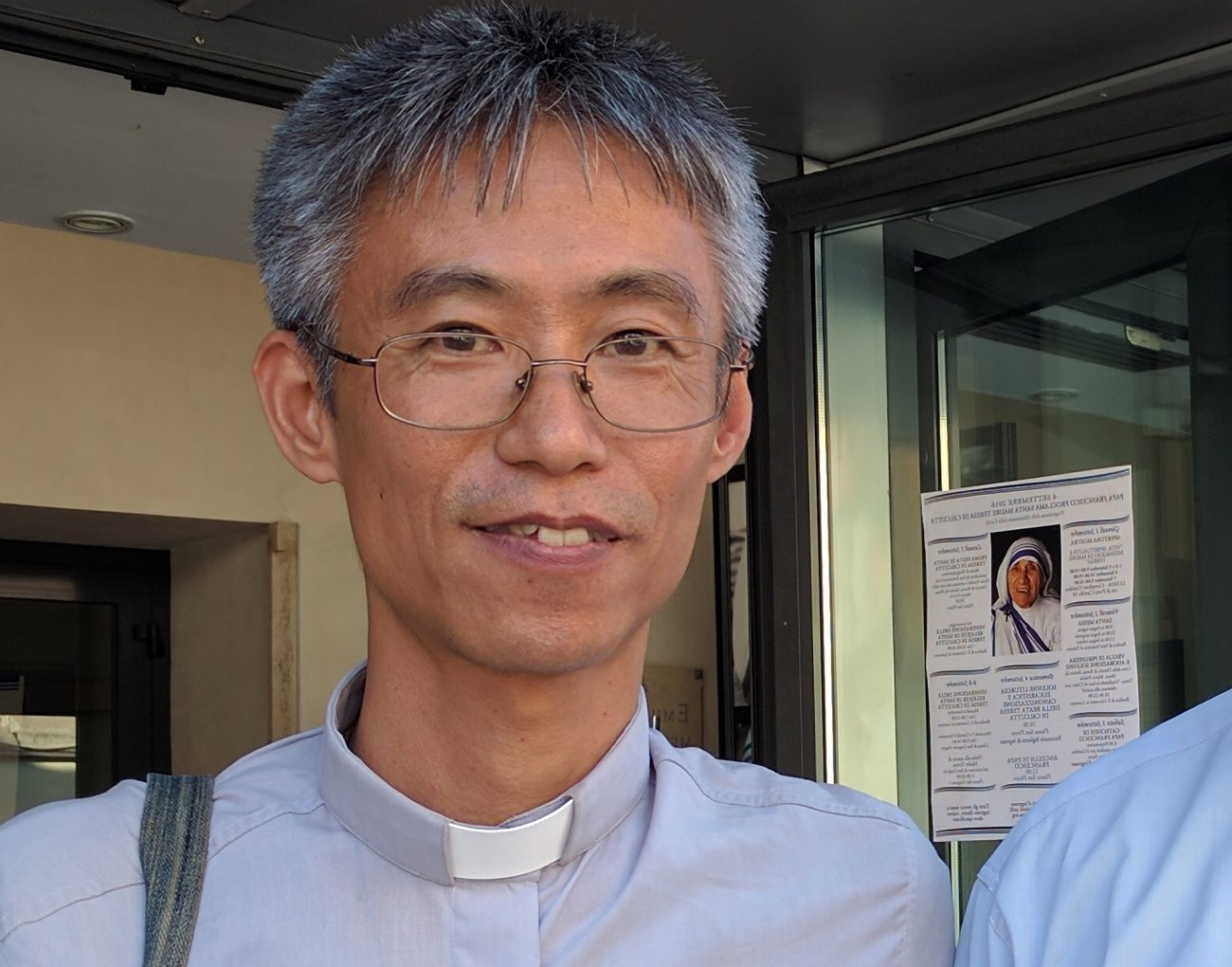 Missionaries of Charity Father Francisco Akihiro from Japan is pictured outside an exhibit on Blessed Teresa of Kolkata in Rome Sept. 2. A personal encounter with Mother Teresa led Father Akihiro to become Catholic and eventually a priest. He was born into a Buddhist family and said he didn't know the name of Jesus. (CNS photo/Junno Arocho Esteves)

VATICAN CITY (CNS) — A personal encounter with Mother Teresa and her work serving the poor and the dying led a young Japanese man on a journey of faith and conversion.

“I was born into a Buddhist family; I didn’t know about Jesus, Christianity, Catholicism or anything,” Missionaries of Charity Father Francisco Akihiro told Catholic News Service Sept. 2. “But I saw in a very visible way how Jesus works through the example of Mother Teresa.”

The Japanese priest was one of countless Missionaries of Charity in Rome for the canonization of Blessed Teresa of Kolkata Sept. 4.

Accompanied by Missionaries of Charity Father Jayanthi Tatapudi of India, Father Akihiro visited an exhibition on the life of Mother Teresa held at Rome’s LUMSA University, one of many events offered to pilgrims before the canonization Mass at St. Peter’s Square.

The portraits and candid shots of the little nun embracing young children and comforting the dying was all too familiar for Father Akihiro. He first met Mother Teresa while working at Nirmal Hriday, the hospice established by her in the heart of Kolkata.

As a young Buddhist volunteer, Father Akihiro told CNS he was struck by her simplicity and closeness to those who helped her in serving the sick and the dying.

“She was small and the feeling (I had) when I met her was like meeting a grandmother,” he said. “Usually, when you want to meet somebody famous, they are in the front and hard to reach. But I was always impressed about how she would approach us, she would come to us.”

The patients who came to the house, he continued, were not only hungry and thirsty, but also lonely. However, in their weakness and in their poverty, “we saw something that radiates: the poverty. We understood this and (realized that) we are also receiving from them,” he said.

Those people who “carried a burden or suffering” were special targets of Mother Teresa’s affection, Father Akihiro noted.

She “would run to the poor, the handicapped people; that left an impression on me. And the many volunteers who saw this would cry,” Father Akihiro said.

He converted to Catholicism and went on to become a priest, leaving his home in Japan; he now lives and works in northern India to serve the poor as Mother Teresa did.

The canonization of the woman who inspired his vocation, he said, is an “opportunity for the world to come to know more about the poor and overcoming indifference.”

“Mother often said that people — more than listening — want to see examples,” he said. Through events like the canonization and the exhibition on her life, “people can now more easily understand how we can love, especially the poor people; how we can serve them through the example of Mother Teresa,” Father Akihiro said.

PREVIOUS: Pope leads prayers for care of the earth, defense of the poor

NEXT: Miracle is sign of mercy, says Brazilian who prayed to Mother Teresa