Mother Teresa upheld as the human face of eternal hope at U.N. 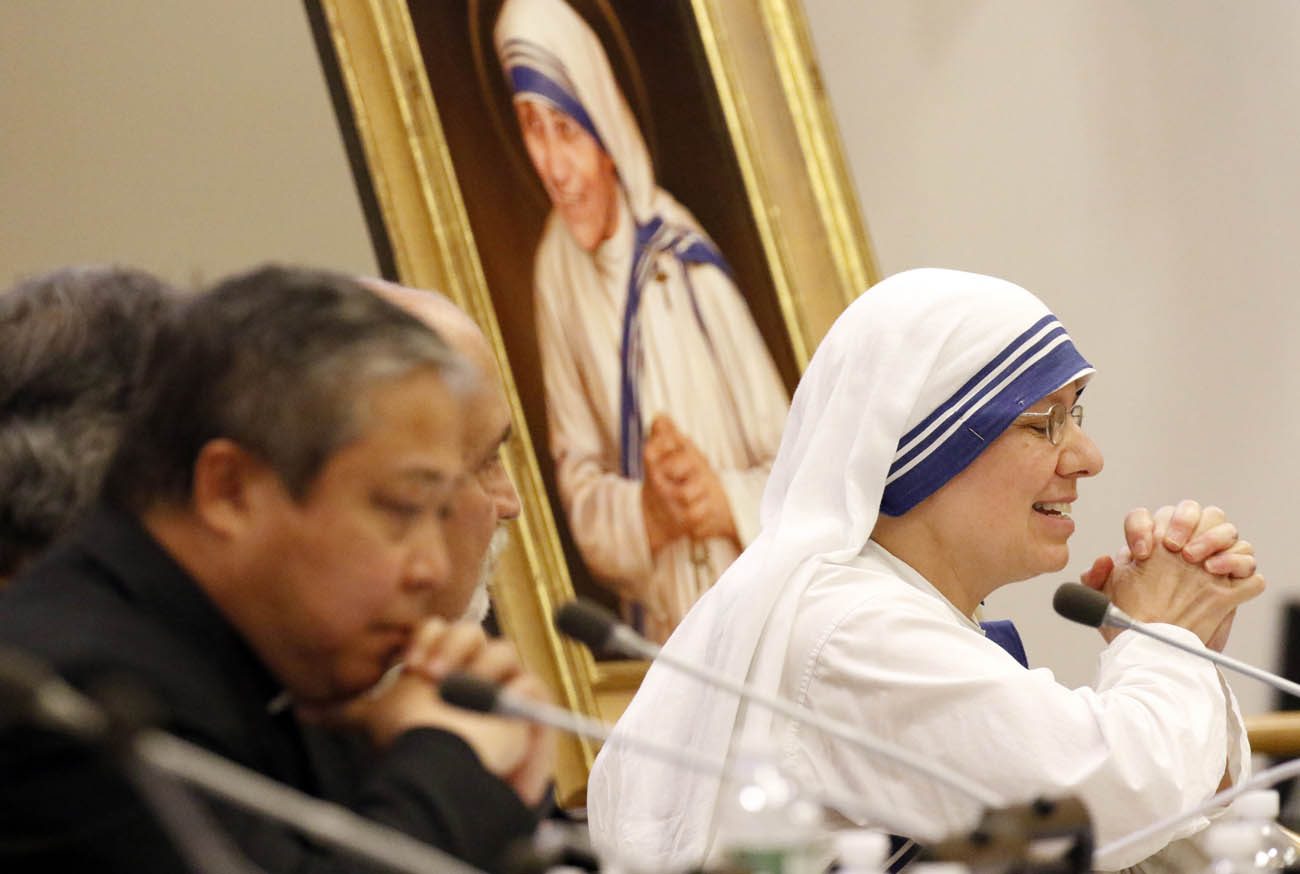 Sister Clare Roy, a member of the Missionaries of Charity, closes her eyes and clasps her hands as she speaks during a conference at the United Nations Sept. 9 on St. Teresa of Kolkata's enduring message to the international community. (CNS photo/Gregory A. Shemitz)

UNITED NATIONS (CNS) — St. Teresa of Kolkata was described as the human face of eternal hope who embodied the founding principles of the world body during a program honoring her canonization.

The saint also offers an enduring example of what the U.N. can achieve, said Archbishop Bernardito Auza, the Holy See’s permanent observer to the United Nations, one of the speakers during a Sept. 9 event that marked her canonization five days earlier in Rome.

Friends, colleagues and ambassadors from the countries most closely associated with Mother Teresa’s lifetime of ministry recounted the saint’s efforts during the program, “Leaving No One Behind: Mother Teresa’s Enduring Message for the International Community Today.”

Mother Teresa was perhaps the first person since St. Francis of Assisi who was considered saintly by people of so many countries and religions, Archbishop Auza said.

Other presenters contrasted Mother Teresa’s diminutive stature with her large hands and can-do attitude. Former U.N Secretary-General Javier Perez de Cuellar introduced the founder of the Missionaries of Charity religious order to the General Assembly in 1985 as “the most powerful woman in the world.”

Alan Sears, president of ADF International, a co-sponsor of the event, said Mother Teresa used joy as a net to catch souls and demonstrated courage by giving up her anonymity to speak out for those who could not.

“Mother Teresa lit the path to a more hopeful future by faith in God, love for the poor, courage in the face of evil and apathy, and her unquenchable joy in the midst of pain,” Sears said.

Father Leo Maasburg, an Austrian who was a close friend of Mother Teresa, noted how the depth to her personality seemed to be transmitted by osmosis.

“She was completely normal and at the same time completely extraordinary,” he said. “She took your hand and looked at you. People had the impression she was speaking to them alone.”

Mother Teresa never imposed her ego on others and her intention was to bring a little light to the darkness of the human condition, Father Maasburg added, saying he came to understand that for the saint, “Kolkata is everywhere, in the depths of our hearts, in broken friendships, in disappointed expectations in life. Mother understood with an open and wide heart to the needs of others.”

British author Kathryn Spink worked with Mother Teresa. She traced the biographical details of the saint’s life and her persistent mission to minister with love to the unwanted and alone. Spink recalled Mother Teresa’s December 1985 “Miracle in Manhattan” where New York Gov. Mario Cuomo granted her request to release dying prisoners to a hospice she established to care for people afflicted with AIDS.

“Mother Teresa was one of the most countercultural people of the 20th century,” said Father Daniel Jones, associate professor of theology at Sacred Heart Seminary in Detroit and a retreat leader for the Missionaries of Charity.

Father Jones said Mother Teresa directed her peacemaking activities to “concrete, individual persons” and saw service as a route to peace. He said her self-assigned task in the congregation’s convents was cleaning toilets.

Ambassadors to the U.N. from Albania, India, Macedonia and Italy spoke of the saint’s impact on their countries and quoted her identifying phrase, “By blood, I am Albanian. By citizenship, an Indian. By faith, I am a Catholic nun. As to my calling, I belong to the world.”

Ambassador Besiana Kadare of Albania said that after Mother Teresa received international recognition for her work, the “quintessence of an unspoken drama” played out in her “unusual and rather tragic relationship with her country.” During the communist control of Albania before 1990, Mother Teresa’s “name was received in profound silence and she was not allowed to visit her mother and sister.”

It is a “sad paradox” that a woman who ministered to dying strangers in other countries “could not offer solace or comfort to her own mother before she died,” Kadare said.

In the years since the fall of communism, an airport, university and main square in the country’s capital have been named for Mother Teresa.

Ambassador Syed Akbaruddin of India said Mother Teresa was remembered and valued as “one of our own” and personified the Indian worldview, “All the world is our home and all humanity is our kin.” While most of India did not share her faith, she was considered a saint in India in her lifetime, he said.

Sister Clare Roy, a Missionary of Charity in the Bronx, said Mother Teresa did not love from a distance and demonstrated a mother’s love and tenderness by leaving no one behind. She said the congregation continues Mother Teresa’s work with the abandoned, lonely, elderly, sick and homeless in New York. “It’s Kolkata again, here in New York,” she said.

Sister Clare suggested that people should speak to Mother Teresa now and seek her intercession because the saint promised, “When I go home to God, I will help you much more than I can now.”

NEXT: Pope: Culture of encounter overcomes indifference in families, society