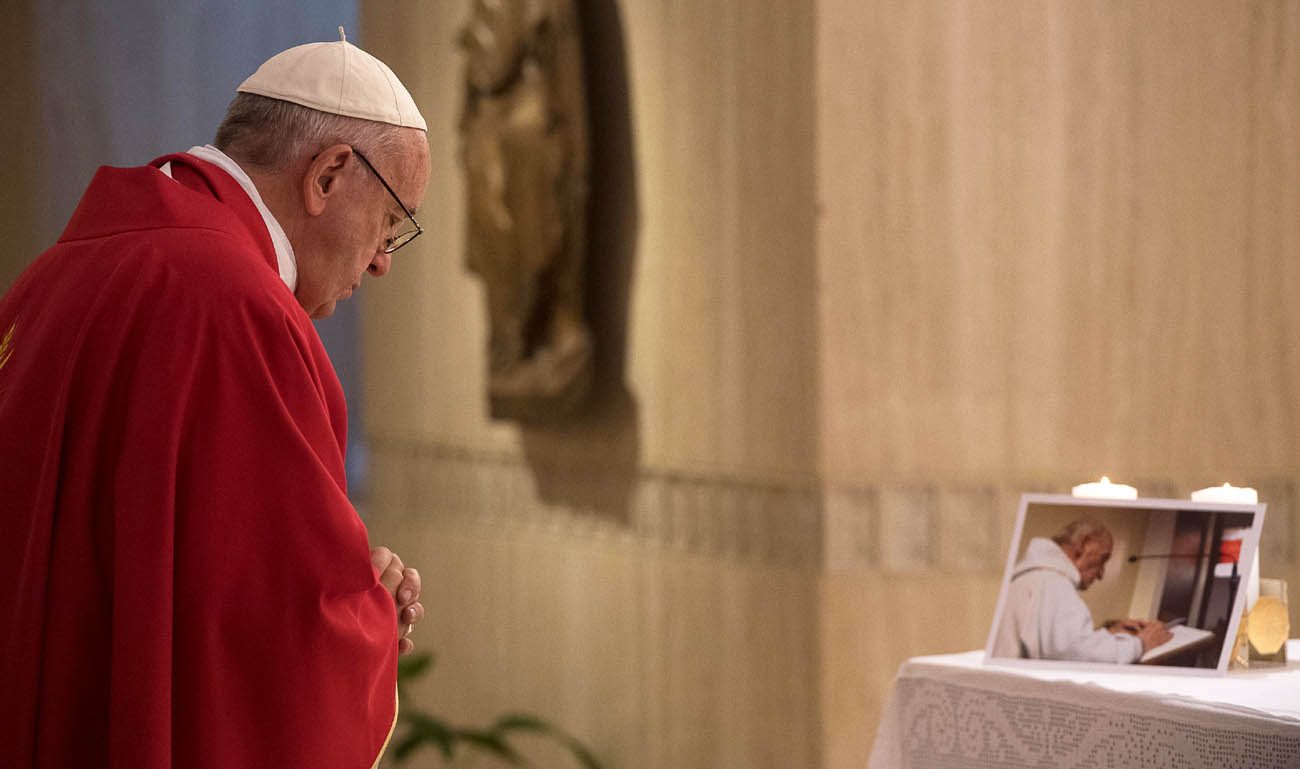 Pope Francis celebrates a memorial Mass for Father Jacques Hamel in the chapel of the Domus Sanctae Marthae at the Vatican Sept. 14. Father Hamel, seen in the photo on the altar, was murdered while celebrating Mass in Rouen, France, July 26; the two killers claimed allegiance to the Islamic State group. (CNS photo/L'Osservatore Romano)

VATICAN CITY (CNS) –- To kill in the name of God is satanic, Pope Francis said at a special requiem Mass for a French priest assassinated by youths claiming allegiance to the Islamic State.

“Father Jacques Hamel had his throat slit on the cross, at the exact moment he was celebrating the sacrifice of Christ’s cross. A good man, meek, brotherly and who always sought to make peace, was murdered as if he were a criminal. This is the satanic line of persecution,” the pope said Sept. 14 during a morning Mass in the chapel of Domus Sanctae Marthae.

Archbishop Dominique Lebrun of Rouen and Father Hamel’s sister, Roselyne Hamel, along with 80 pilgrims from the diocese joined Pope Francis for the Mass in memory of Father Hamel, who was killed July 26.

Celebrating the feast of the Exaltation of the Cross, the pope entered the chapel dressed in a red chasuble, the color symbolizing martyrdom. He reverently bowed before the altar, where a picture of Father Hamel was placed in front of two lit candles.

Archbishop Lebrun said he had brought the photo and asked Pope Francis to sign it with a note for three religious women who had been with Father Hamel at Mass that day. The sisters care for the sick in Saint-Etienne-du-Rouvray and were not able to join the pilgrimage to Rome. 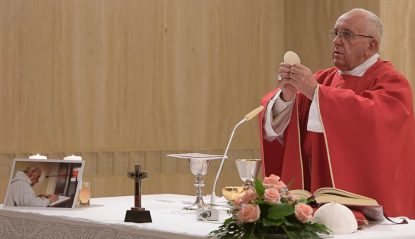 Pope Francis celebrates a memorial Mass for Father Jacques Hamel in the chapel of the Domus Sanctae Marthae at the Vatican Sept. 14. (CNS photo/L’Osservatore Romano)

In his homily, the pope reflected on the mystery of Christ “who made himself a martyr for the salvation of men and women.”

“The history of Christian martyrdom,” he said, has continued from the first centuries until today, when “Christians are murdered, tortured, imprisoned and beheaded because they do not deny Jesus Christ.”

“In this history, we arrive to our Father Jacques. He is a part of this chain of martyrs. The Christians, who suffer today — be it in prison, in death or by torture — for not denying Jesus Christ, show the very cruelty of this persecution. And this cruelty that asks for apostasy, we can say, is Satanic,” the pope said.

Nonetheless, the pope noted, Father Hamel accepted his martyrdom and in his final moments, “did not lose the lucidity to accuse and clearly say the name of his murderer. He clearly said, ‘Be gone, Satan.'”

“This example of courage, as well as the martyrdom of his own life when he gave himself to help others, to help create brotherhood, helps us to go forward without fear,” the pope said.

Father Hamel’s sister, Roselyne, told reporters after the Mass she is convinced that neither her brother nor Pope Francis were blaming Islam for the murders. “God is love,” Roselyn said, the assassins who “killed my brother did so in the name of a god who is not the God of Islam nor the God of Christianity.”

“The assassins, I think, acted under the influence of the devil, of Satan,” Archbishop Lebrun said. When Father Hamel said, “‘Be gone, Satan,’ he had already been stabbed and was on the floor. His sister immediately gave me a correct interpretation: ‘Father Jacques did not believe these young men were the origin of this evil.'”

The archbishop said that since the murder there has been an obvious increase in fear among the people of the region and priests have reported receiving dozens of phone calls asking if it is safe to go to church. “But there are more people at Mass now,” he said.

“Jesus never said it was stupid to be afraid,” Archbishop Lebrun told reporters. When he tells his disciples, “Do not be afraid,” he is telling them to acknowledge their fear and overcome it with the strength of faith. 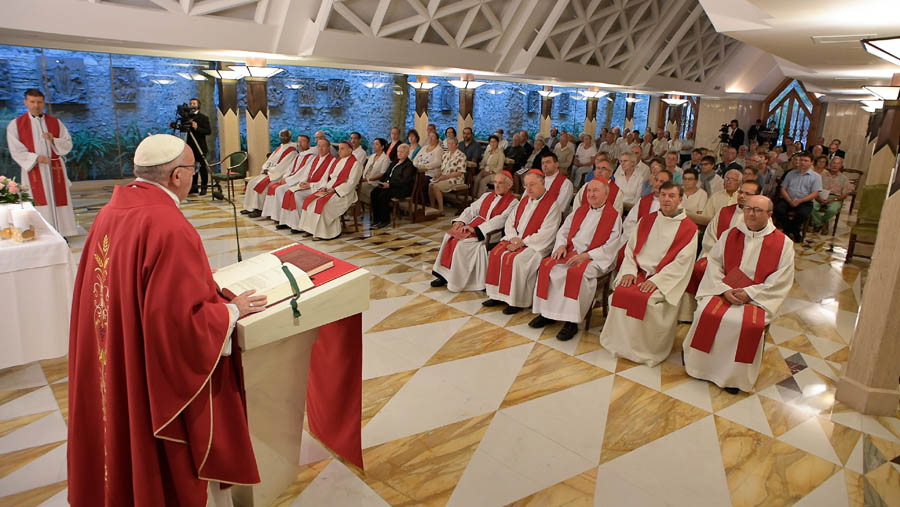 Pope Francis celebrates a memorial Mass for Father Jacques Hamel in the chapel of the Domus Sanctae Marthae at the Vatican Sept. 14. (CNS photo/L’Osservatore Romano)

PREVIOUS: While some protest TTIP, cardinal says trade treaty could be beneficial

NEXT: Church’s process for choosing bishops again under scrutiny