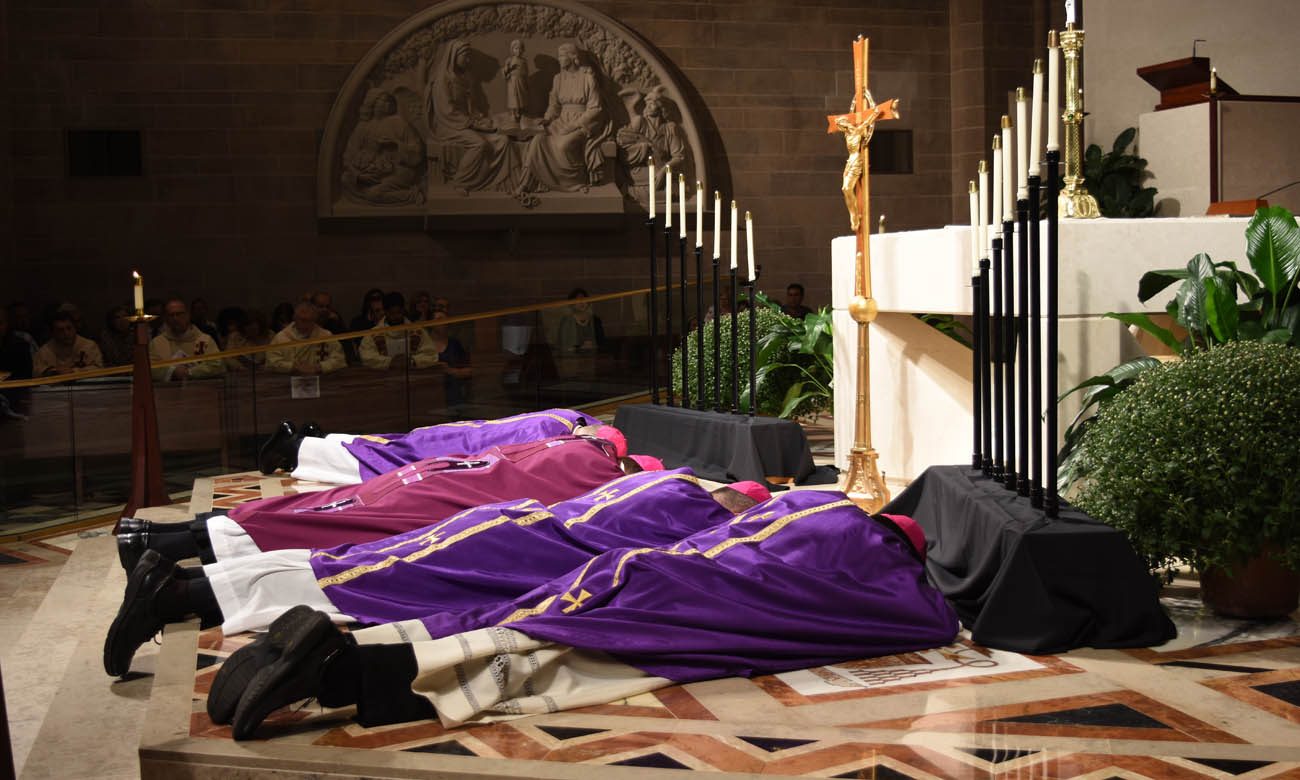 Detroit Archbishop Allen H. Vigneron and Detroit Auxiliary Bishops Michael J. Byrnes, Arturo Cepeda and Donald F. Hanchon lie prostrate before the altar Oct. 7 at the Cathedral of the Most Blessed Sacrament in Detroit as the Litany of Pardon is read aloud. (CNS photo/Dan Meloy, The Michigan Catholic)

The four men lay prostrate before the altar, humbling themselves before God, and in view of the flock they are called to shepherd.

Then the “litany of pardon” began, with the sins and transgressions of the Archdiocese of Detroit read aloud, recalling instances in the Catholic Church’s history when it failed to live up to God’s calling. All the while the clergy and laity remained kneeling, calling to mind their own part in the transgressions.

— “For ignoring the word of God, living and effective, and hiding behind policies and procedures.”

— “For our failures to take to heart the Lord’s condemnation of those who scandalize ‘the little ones,’ and for failing to protect children from sexual abuse.”

Each invocation was answered with “Kyrie eleison” — “Lord have mercy.”

The “Mass for Pardon” Oct. 7 at the cathedral is a step on the archdiocese’s path to “unleash the Gospel,” Archbishop Vigneron explained, saying how the Mass was a necessary step on the road to becoming a “band of joyful missionary disciples.”

Before a packed cathedral, Archbishop Vigneron addressed in his homily the necessity for the Mass for Pardon, linking repentance as an inseparable part of the Gospel message.

“Repent and believe in the good news, this is an inseparable prayer,” Archbishop Vigneron said. “In this computer age, you may call it a binary prayer. The two is really one. As we share in the mission of Jesus Christ, we can never siphon these truths.

Archbishop Vigneron said the Mass wasn’t a time for Catholics to beat themselves up for past transgressions or forget that sin has occurred within the church.

Rather, the purpose of asking for and receiving pardon is to prepare the church to become the group of evangelizers God is calling it to be.

During the buildup to the “Mass for Pardon,” Archbishop Vigneron related how a reporter asked him what he most anticipated. The archbishop admitted he was taken aback by the question at first, but then replied he most anticipated Jesus being present in the cathedral in the form of the Blessed Sacrament.

“I most anticipate what will happen when I receive your gifts of bread and wine and are prepared and placed on the altar, when the Holy Spirit comes down upon them and takes the form of the body and blood of Christ,” Archbishop Vigneron said. “I anticipate offering the Holy Sacrament, because here, through the Holy Spirit, our true high priest is present.

“Present in his body, present in his blood. Offered with the sins we have confessed and will still confess again. To offer our prayers, with His one self, to the Father,” he continued. “So I tell you, I know, I am certain, that our sins are expiated, because we have a high priest who has risen from the dead and pleads for us at the right hand of the Father.”

Archbishop Vigneron concluded his homily with a summarization of what the “Mass for Pardon” — and indeed reconciliation itself — is all about: not an erasing or forgetting of sin, but the transformation that is offered through the healing power of faith in Jesus Christ.