Catholics called to be active in the public square, live faith fearlessly 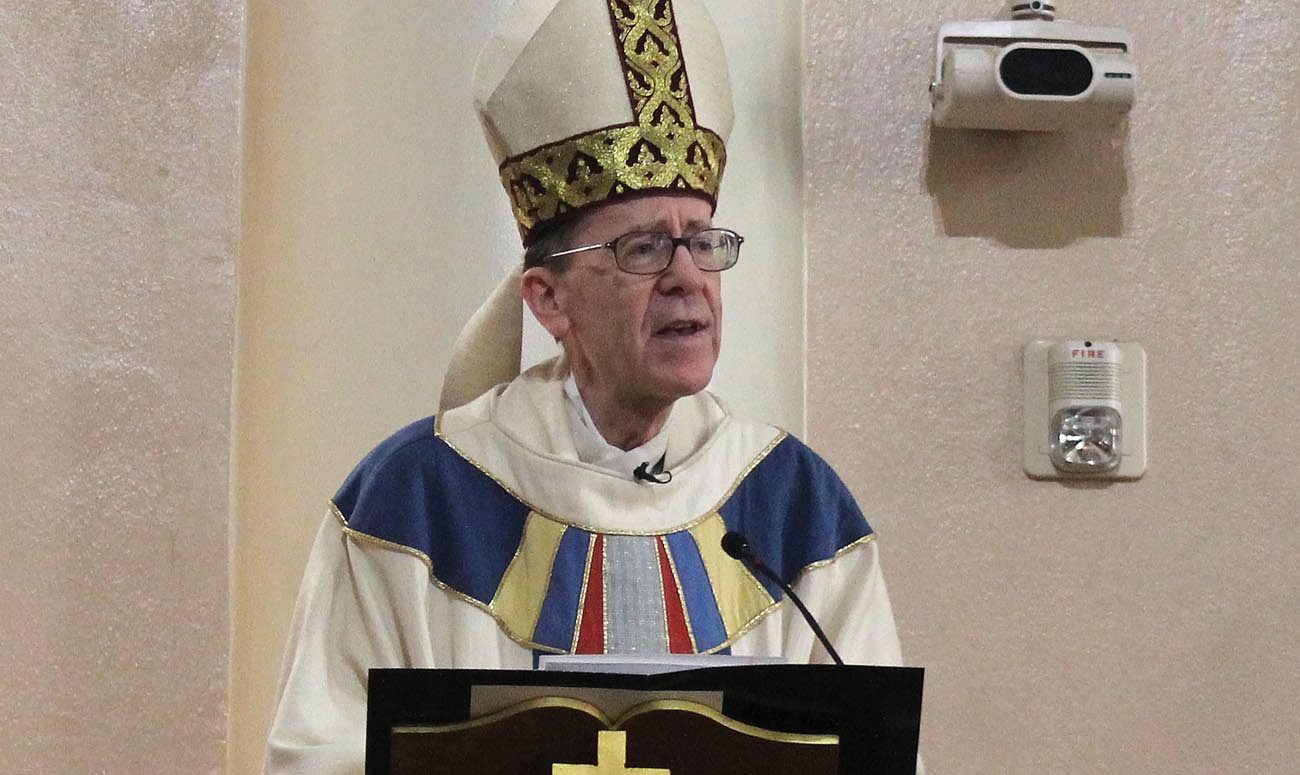 Phoenix Bishop Thomas J. Olmsted delivers the homily during a Mass celebrated Sept. 17 at St. Mary's Basilica ahead of a "Catholics in the Public Square" legislative seminar. In his homily, the bishop reminded the congregation that it is Jesus who "fills us with hope and courage to live in him each day." (CNS photo/Tony Gutierrez, Catholic Sun)

PHOENIX (CNS) — Followers of Christ “do not walk into the voting booth by themselves, but “do it in him and with him,” Phoenix Bishop Thomas J. Olmsted told those at a Mass celebrated before a legislative seminar on “Catholics in the Public Square.”

Bishop Olmsted preached about the centrality of belief in the resurrection of Christ, a belief he said “has had to be defended throughout history,” including today.

This reminder of the power of the resurrection and Jesus’ promise to be with his believers until the end of time should bolster our faith “no matter what may discourage us in being good citizens,” the bishop told the congregation at St. Mary’s Basilica.

Following the Mass, more than 350 packed a hall inside the Diocesan Pastoral Center for the seminar held in mid-September leading up to the November elections.

Speakers included Jennifer Roback Morse, founder of the Ruth Institute, and Alan Sears, president and CEO of the Alliance Defending Freedom. Both received standing ovations for high-energy talks that encouraged attendees to get informed, speak out and live their faith boldly in the public square.

Many of those gathered were parish representatives on hand to get copies of the fourth edition of Bishop Olmsted’s “Catholics in the Public Square” booklet. The booklet examines the intersection of faith and civic duty and calls on the faithful to form their conscience “in accord with the voice of God” and to “defend the dignity of every human person.”

Sean Halpain, state deputy for the Knights of Columbus, spoke of the organization’s goal this year to encourage men to become the spiritual leaders of their own families. He also called on younger men to join the more than 16,000 Knights in Arizona.

Ron Johnson, executive director of the Arizona Catholic Conference, pointed to the funding by the Knights of Columbus that made it possible to print 55,000 copies of “Catholics in the Public Square.” The Phoenix Diocese held the first legislative seminar to distribute the booklet 10 years ago, he said, and since then, more than 300,000 have been distributed.

“This booklet has helped change the diocese,” Johnson said. In 2008, when voters were to decide on a proposition defining marriage as the union of one man and one woman, the educational campaign launched by the booklet and seminar helped shift the Catholic vote 40 points, Johnson added, and the measure passed. Despite such success, however, “in 2016, we see storm clouds,” he said.

Johnson encouraged attendees to educate themselves on the issues and noted that the five Catholic bishops of Arizona oppose the push to legalize recreational marijuana in the state, a measure that will be before voters in November.

Specifically, Johnson urged people to Vote No on Proposition 205, the marijuana initiative, to avoid problems, especially those related to the endangerment of public safety and harm to children.

Both Sears and Roback Morse also alluded to ominous developments in the public square. Sears spoke of the “56 percent of self-identified Catholics who disagree with the church’s teaching on marriage and the 46 percent of Catholics who believe private business owners should be compelled to provide services to same-sex couples. The trampling of religious liberties continues, but most Catholics fail to grasp the significance,” he said.

“One thing people don’t understand is that it won’t matter to the government how kind you are, how loving you are,” Sears said. “All that will matter is one thing: whether you have bowed and offered your pinch of incense at the altar of secularism. … Catholics have seen over and over that when you offer that little pinch, it never satisfies.”

He called for Catholics to speak out and stand with Sts. John the Baptist and Thomas More, who “never compromised on marriage. … These are grim days, but they are also days that can form our own sainthood.”

Roback Morse, for her part, defined and denounced the sexual revolution, calling it “a pagan ideology that no Christian should have anything to do with.” She called out the separation of sex from conception, the contraceptive mentality, no-fault divorce and the move to wipe out gender differences for the harm they have caused society.

She drew laughs with a meme of Blessed Paul VI inscribed with the words, “Humanae Vitae: I told you so.” The late pontiff predicted that acceptance of contraception would lead to numerous social ills, including infidelity and moral decline.

“The sexual revolution is irrational and impossible. … We have people in power deciding to create a world not based on reality,” she said. Sex does make babies, children need their parents, and there are differences between men and women.”

The Arizona Catholic Conference, the Knights of Columbus and the Phoenix Diocesan Council of Catholic Women co-sponsored the half-day legislative seminar.

NEXT: Hyde Amendment has a bipartisan past but a cloudy future