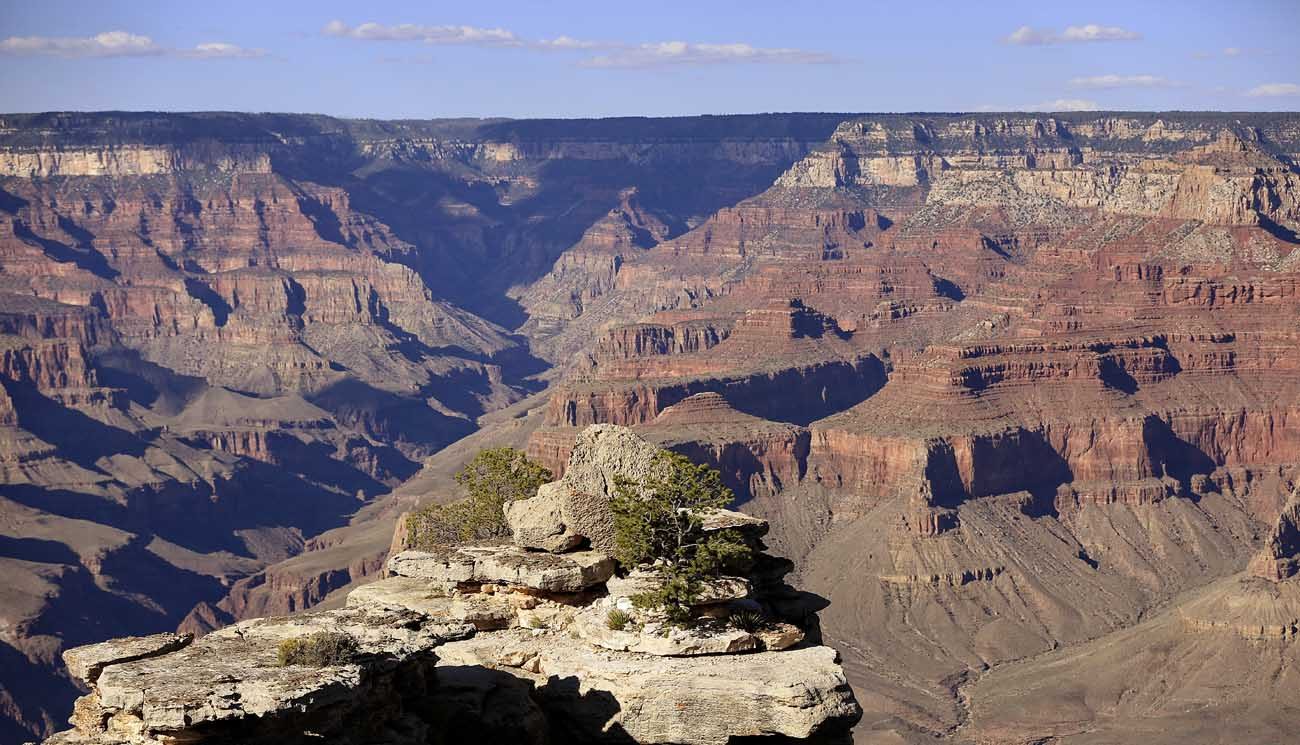 A view of Grand Canyon National Park in Arizona is seen from the south rim Sept. 12. (CNS photo/Nancy Wiechec)

WASHINGTON (CNS) — From the dramatic vistas of the Grand Canyon in Arizona to the glistening waters of Cape Cod in Massachusetts, national parks have stood as places of wonder, history and culture.

John Muir, considered the father of our national parks, petitioned U.S. lawmakers to set aside such places for preservation, play and prayer.

“Everybody needs beauty as well as bread, places to play in and pray in, where nature may heal and cheer and give strength to body and soul alike,” wrote the 19th-century naturalist and philosopher in his book “Yosemite.”

During the 100th year of the National Park Service, Catholic News Service traveled to a few of the nation’s most popular parks and discovered sites of spiritual refuge beside some of America’s most beautiful landscapes.

Though the U.S. governmental agencies operate within the guidelines of separation of church and state, there are sacred symbols in many of the national parks, mainly because the Catholic Church and other religious institutions are a part of the nation’s story.

Religious men and women often use nature’s bounty as a backdrop for spiritual connection.

Archbishop Paul D. Etienne, an angler and outdoorsman, said he understands people’s longing for nature. Newly named to head the Archdiocese of Anchorage, Alaska, he has for the last seven years overseen the Diocese of Cheyenne, Wyoming, which includes Yellowstone and Grand Teton National Parks.

“Nature stirs something in the human soul that helps to reveal the Creator to us,” he said. “Through creation we come to know the Creator.”

He called national parks a “true treasure of this nation” and nature “God’s first book.”

“To set aside the natural beauty of this country is very important,” he said. “It helps us to understand the nature of humanity.”

Yellowstone, the first national park, was established by Congress in 1872. Today, 412 parks covering more than 84 million acres in the U.S. and its territories are managed by the National Park Service.

Each year, more than 300 million people venture into the parks for recreation, relaxation and renewal.

President Woodrow Wilson created the National Park Service in 1916 to protect and regulate all federal parks and monuments. Under the Department of the Interior, the Park Service was charged with the conservation of scenery, wildlife and natural and historic objects and to “provide for the enjoyment of the same in such manner and by such means as will leave them unimpaired for the enjoyment of future generations.”

To meet the needs of Catholic visitors, Catholic clergy and laypeople lead weekend liturgical services inside some of the largest parks — Yellowstone, Yosemite, Grand Teton, Grand Canyon, Zion and Glacier — during the busy summer season.

Two Catholic chapels, Sacred Heart in Grand Teton and El Cristo Rey at the south rim of the Grand Canyon, not only offer Mass but are open daily for visits and prayer.

Parishes in park gateway communities, such as St. Mary’s in Gatlinburg, Tennessee, also cater to throngs of national park visitors.

A majority of those attending Mass at St. Mary’s are visitors of the Great Smoky Mountain National Park, the most visited of the national parks with an estimated 10.7 million people annually, said Carmelite Father Antony Punnackal, pastor of the parish.

“We call this parish ‘the parish of the Smokies,’ because it’s basically for the visiting parishioners,” Father Punnackal told CNS.

Though the church has about 200 registered families who live within the parish boundaries, an average of 700 people attends Mass each weekend from the spring through fall, he said.

Ed Willis of Delaware, Ohio, said his trip through the Great Smoky Mountain National Park offered him a spiritual experience while witnessing “the creation of God,” a vision that stayed with him as he worshipped at St. Mary’s after leaving the park for the day.

“Having this park and church within reach has deepened my relationship with God,” he told CNS after attending a Saturday evening Mass in August.

The National Park Service not only preserves America’s top wilderness areas, but its cultural and historical places as well, including such sites as the Washington Monument, the White House, the Statue of Liberty, Ellis Island and Independence Hall.

“Most of the national parks are cultural sites,” said Kathy Kupper, spokeswoman for the Park Service. “They tell the story of who we are collectively as a people and as a society.”

That story includes the role of Catholicism in the building of the nation.

“There are many connections between the National Park Service and the Catholic Church,” Kupper told CNS. “Perhaps the most famous Catholic Church association is at the San Antonio Missions.”

Established as a national historical park in 1978, it includes Concepcion, San Jose, San Juan and Espada missions and represents a unique collaboration between the park service and the church. The Park Service maintains mission buildings, landscapes and visitor centers, while the Archdiocese of San Antonio cares for the mission churches and oversees religious services. Visitors can learn about Spanish Colonial Texas and also attend Mass in the still active missions.

In the mix of national historical parks and monuments, are those that tell the stories of some prominent Catholics.

— Kalaupapa National Historical Park in Molokai, Hawaii, a memorial to the secluded settlement of people banished from their homes for having Hansen’s disease (leprosy), tells the story of the community and those who served as its caregivers, including St. Damien of Molokai (Father Damien De Veuster) and St. Marianne of Molokai (Mother Marianne Cope).

— The John Fitzgerald Kennedy National Historic Site in Brookline, Massachusetts, is the Catholic president’s birthplace and boyhood home. A reproduction of the baptismal gown worn by JFK and his siblings is among the religious items on display. (The original gown is retained in storage for preservation.)

— Tumacacori National Historical Park south of Tucson, Arizona, contains the ruins of a mission founded by Jesuit Father Eusebio Francisco Kino in 1691. The park imparts the accounts of European missionaries, settlers and soldiers and the native O’odham, Apache and Yaqui people they met in their explorations and ministry.

— Cesar E. Chavez National Monument, located northeast of Keene, California, is the home and burial place of the Latino labor leader and civil rights activist. With the rallying call “Si, se puede!” (“Yes, we can!”), his movement led to better working conditions and higher wages for farm workers. The monument is part of the Chavez property known as Nuestra Senora Reina de la Paz (Our Lady Queen of Peace).

The National Park Service also manages the National Register of Historic Places, which includes more than 400 Catholic churches. Among them are the California missions established by Spanish Franciscan missionary St. Junipero Serra.

PREVIOUS: Mass in Yellowstone ‘an experience of God unlike any other,’ says Jesuit

NEXT: U.S. Hispanics give big margins to Clinton, Democrats in new Pew poll