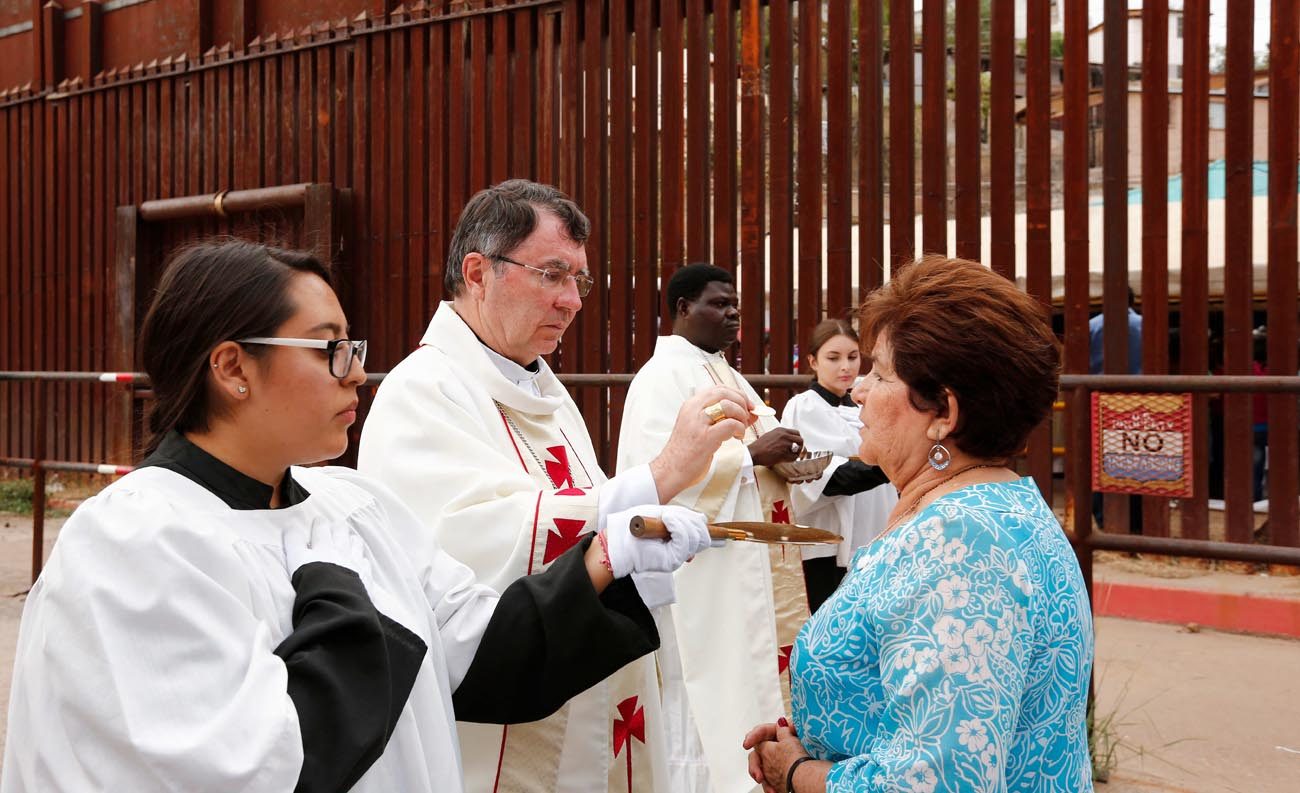 Archbishop Christophe Pierre, apostolic nuncio to the United States, gives Communion during Mass at the international border in Nogales, Ariz., Oct. 23. Dioceses Without Borders, an effort of Mexico's Nogales Diocese and the U.S. dioceses of Phoenix and Tucson, Ariz., organized the liturgy celebrated on both sides of the U.S.-Mexico border. (CNS photo/Nancy Wiechec)

NOGALES, Ariz. (CNS) — The apostolic nuncio to the United States celebrated Mass at the U.S.-Mexico border Oct. 23 offering prayers to break down the barriers that separate people.

Archbishop Christophe Pierre faced the immense steel border fence in Nogales as he and the bishop of Tucson and the bishop of Mexico’s Diocese of Nogales, Sonora, concelebrated the liturgy with people gathered on both sides of the border.

The nuncio began the prayer of the faithful with a plea for unity.

“Jesus, we come before you today as your disciples, sometimes filled with fear and doubt, even suspicion,” he said. “We pray to dismantle the barriers within our hearts and minds that separate us, who are all members of your body.”

Following his words, young people led the congregation in prayers for “needed immigration reform,” for humane treatment of migrants who don’t have documents, and for “security and justice for all.” They prayed especially for migrant children, “who are vulnerable to exploitation and abuse,” and for all who have died in border violence, including border patrol agents, immigrants and innocent victims.

The Mass was the third such one this year along the U.S.-Mexico border in Arizona. The liturgies were organized by Dioceses Without Borders, an effort of the dioceses of Nogales, Tucson and Phoenix to work collaboratively on issues that affect the church and people in the border region.

During his homily and afterward in an interview with Catholic News Service, Archbishop Pierre echoed the sentiments of Pope Francis in regard to borders and the care of migrants and refugees, who the archbishop said all too often are looked upon as unwanted and as criminals. 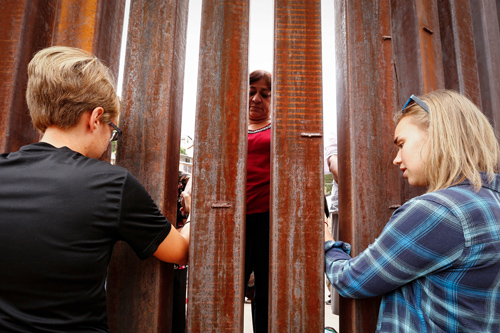 Young women reach through the international border fence to hold hands and pray the Our Father with those on the other side during Mass Oct. 23 in Nogales, Ariz. (CNS photo/Nancy Wiechec)

“Borders exist all over the world, and borders are not bad, but borders should not be just a barrier — should not be a wall — but should be a bridge between people,” the nuncio said.

“Anything that goes in the direction of understanding, helping each other, discovering the beauty of the other is what is necessary to covert hearts and transform the world,” he said. “It’s time to break the obstacles that exist between people.”

Archbishop Pierre is no stranger to the people of Mexico. He served as nuncio in Mexico for nine years before being appointed as the pope’s representative in the U.S. But he said this Mass was his first visit to Nogales, Arizona.

In what seemed to be a spontaneous moment during the service, five young people ducked under a barrier near the border fence to hold hands and pray the Our Father with those on the other side in Mexico.

They stayed at the border fence until the sign of peace, offering their hands to those on the other side.

Carlos Zapien, music director for the Diocese of Tucson, said the special Mass was a statement that “faith can unite people.”

Zapien’s original score “Misa de la Misericordia” (“Mass of Mercy”) was used in the cross-border liturgy with choirs on both sides participating.

“Faith and music have no borders,” he said.

Bishop Gerald F. Kicanas of Tucson said he was grateful for to Archbishop Pierre’s participation in the service.

“He represents Pope Francis, whose heart is along the borders of our world, caring for immigrants and refugees,” he told CNS.

“The nuncio’s presence is a reminder of our Holy Father’s great love for those who are suffering, for those who are in need. So this was a very special celebration here in ‘ambos Nogales’ (‘both Nogaleses’) as we pray together across walls united in our prayer for one another.”

Among the hundreds of people that gathered for the border Mass were those that serve the Kino Border Initiative, a bi-national migrant advocacy and service organization.

Bishop Kicanas expressed his pride in the group and in a group of young people, the Kino Teens, who work with the border initiative.

PREVIOUS: Knights of Columbus urges U.S. Catholics to pray novena ahead of election

NEXT: Poverty not ‘a misfortune,’ but ‘an injustice,’ says Peruvian theologian