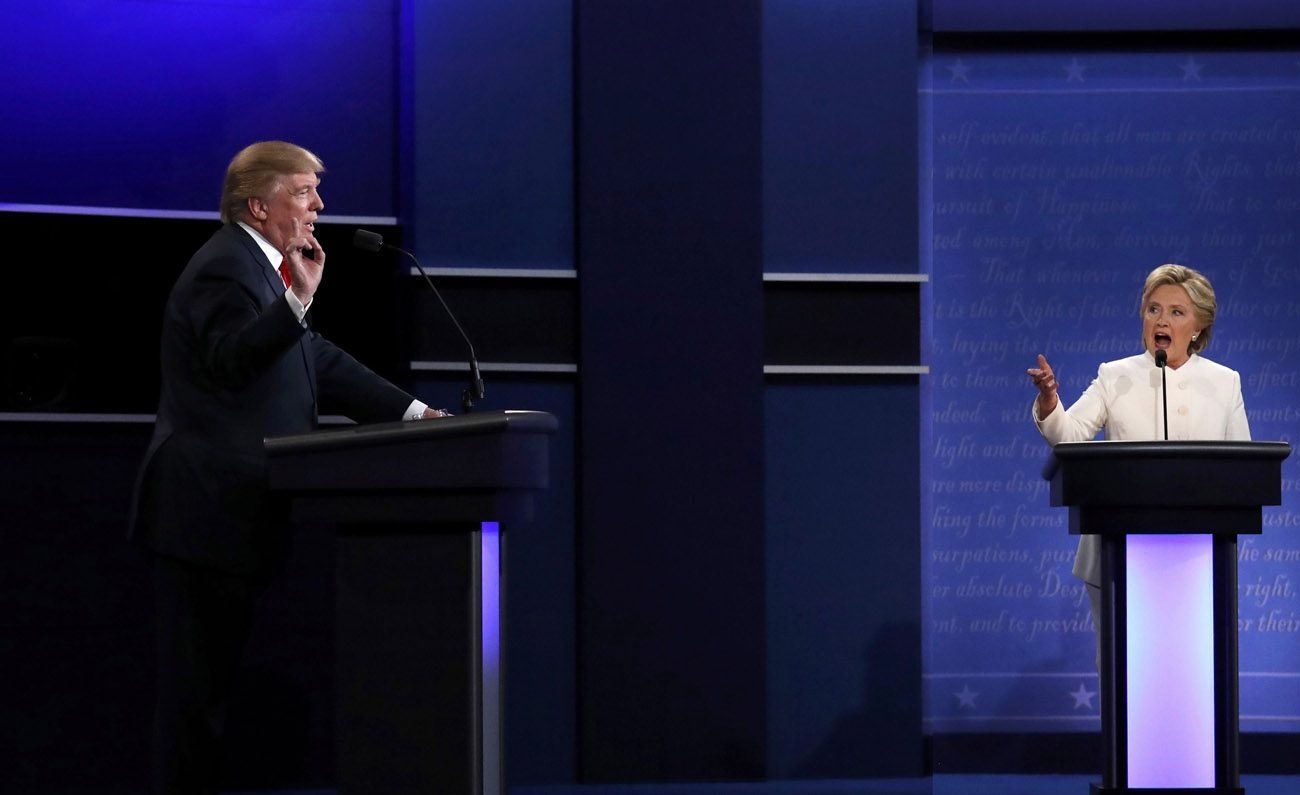 Trump made those remarks after Democrat Hillary Clinton, answering the first question from moderator Chris Wallace, restated her support of the 1973 Roe v. Wade decision that legalized abortion virtually on demand, and she pledged continued support for Planned Parenthood.

“The kinds of cases that fall at the end of pregnancy are often the most heartbreaking, painful decisions for families to make,” she said. “I do not think the United States government should be stepping in and making those most personal of decisions. So you can regulate if you are doing so with the life and the health of the mother taken into account.”

“Because based on what she’s saying and based on where she’s going and where she’s been, you can take the baby and rip the baby out of the womb. In the ninth month. On the final day. And that’s not acceptable,” he said.

Clinton called that “scare rhetoric,” adding, “This is one of the worst possible choices that any woman and her family has to make. And I do not believe the government should be making it.

“I’ve been to countries where governments either force women to have abortions like they used to do in China, or forced women to bear children like they used to do in Romania. And I can tell you, the government has no business in the decisions that women make with their families in accordance with their faith, with medical advice, and I will stand up for that right.”

Official Catholic teaching condemns the intentional killing of the unborn at any time from conception on.

In 2003, Congress passed the Partial Birth Abortion Ban Act, and the bill was signed into law by President George W. Bush. The Supreme Court upheld ban by a 5-4 vote in 2007.

The law prohibits a form of late-term abortion known as “partial-birth,” also referred to as an “intact dilation and extraction.” A live fetus is partially delivered and an incision is made at the base of the skull, through which the brain is removed, allowing for easier delivery of the collapsed head and the rest of the baby’s body.

According to the Alan Guttmacher Institute, just over 1 percent of all abortions are performed at 21 weeks or later. Eight states already have a 20-week abortion ban.

Trump has promised in writing that he would that he would sign into law a federal 20-week ban known as the Pain-Capable Unborn Child Protection Act, and also stop federal funding of Planned Parenthood, but he did not repeat those promises during the debate.

Trump did restate his promise to nominate pro-life justices “of a conservative bent” to the Supreme Court, acknowledging that were the court to repeal Roe v. Wade, “it will go back to the states and the states will then make a determination.”

The candidates’ remarks on abortion were quickly overshadowed by Trump’s refusal to commit to an answer about whether he’d accept the results of the election if he lost: “I will look at it at the time.”

Issues of personal morality — Clinton’s honesty and allegations made by several woman of sexual misconduct by Trump years ago — went by quickly.

“Those stories are all totally false, I have to say that,” Trump said. “I didn’t even apologize to my wife who’s sitting right here, because I didn’t do anything. I didn’t know any of these women. I didn’t see these women.” He called the several published accounts “all fiction. It was lies and it was fiction.”

“Donald thinks belittling women makes him bigger,” Clinton responded. “He goes after their dignity, their self-worth, and I don’t think there is a woman anywhere who doesn’t know what that feels like.”

“Nobody has more respect for women than I do,” Trump retorted. “Nobody.”

Minutes later, while Clinton was discussing her plan to add money to the Social Security trust fund, she called it “part of my commitment to raise taxes on the wealthy. My Social Security payroll contribution will go up, as will Donald’s — assuming he can’t figure out how to get out of it.”

Trump responded to that with, “Such a nasty woman.”

PREVIOUS: Tennessee Catholic parish gets energy from nearby national park