What role are life issues playing in this year’s presidential election? 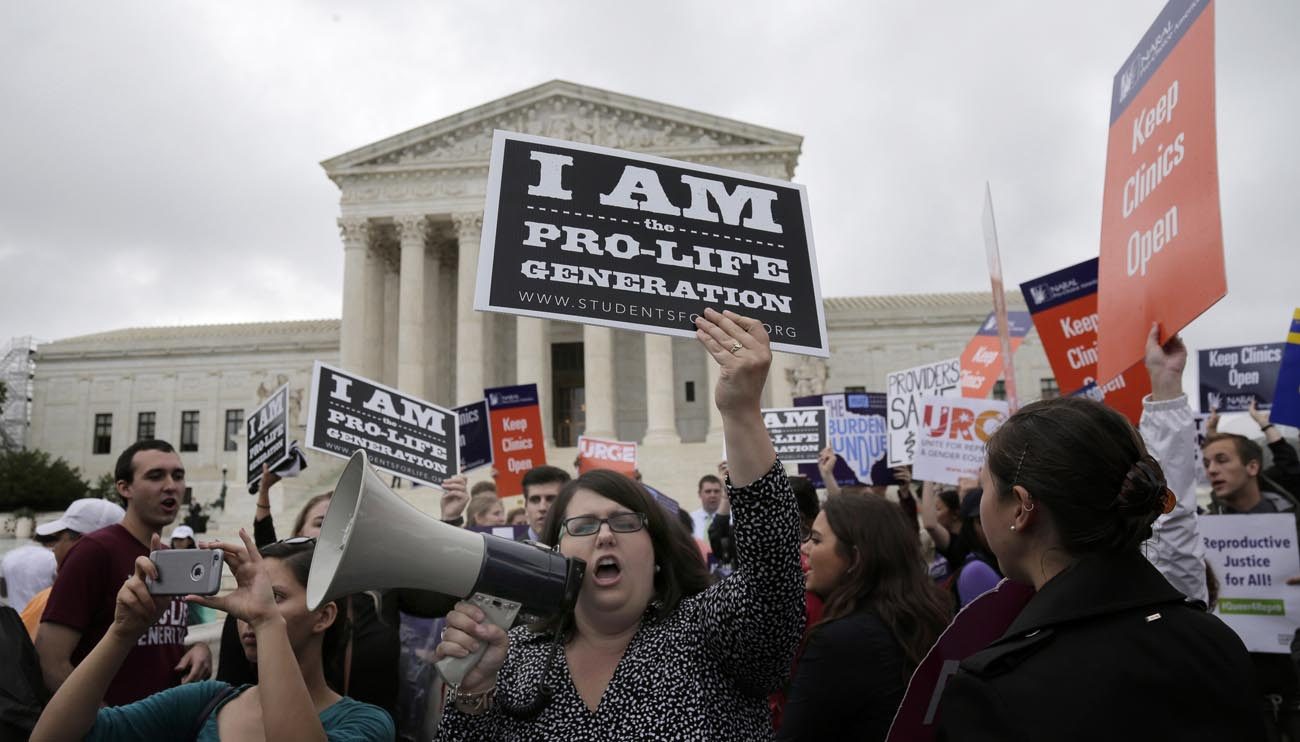 A pro-life supporter yells in a megaphone in front of the U.S. Supreme Court June 23. (CNS photo/Andrew Gombert, EPA)

WASHINGTON (CNS) — Back in June, Kristan Hawkins, who heads Students for Life, got a firsthand look at how this presidential election differs from all others when she participated in Donald Trump’s outreach meeting with evangelicals, which had only a few Catholics present.

She said the Republican nominee for president appeared to be unfamiliar with the pro-life movement. “He kept saying ‘the pro-life.’ I think I would have liked to have known more of his heart, and less stump speeches.”

Three months and two campaign managers later, Trump issued a specific document about his pro-life positions with the formation of his 34-member Catholic Advisory Group, whose members include Marjorie Dannenfelser, president of the Susan B. Anthony List; Janet Morana, co-founder of the Silent No More Campaign; and Father Frank Pavone, national director of Priests for Life.

On Oct. 5, the Trump campaign sent a letter to members of the Catholic Leadership Conference meeting in Denver pledging his support for pro-life issues. Democratic presidential nominee Hillary Clinton was invited to address the group, but her campaign declined.

As recently as the Oct. 9 town hall debate with Trump, Clinton said she wants “a Supreme Court that will stick with Roe v. Wade and a woman’s right to choose.”

How prominent a role have life issues — abortion but also capital punishment and assisted suicide — really played in the 2016 presidential elections?

“It’s about personality, mostly,” said Massimo Faggioli, a professor of theology and religious studies at Villanova University, in an interview with Catholic News Service. He called the presidential campaign “morally confusing. The voice of the values voters, especially on abortion, is not as important as it used to be.”

Clinton’s running mate, U.S. Sen. Tim Kaine of Virginia, also supports the Supreme Court’s Roe v. Wade ruling, which legalized abortion virtually on demand in 1973. As a practicing Catholic, Kaine says he is personally opposed to abortion, but that as a public official he cannot impose his views on his constituents.

The Democratic National Platform, endorsed by Clinton and Kaine, opposes “Republican efforts to defund Planned Parenthood health centers” and seeks to overturn federal and state laws and policies that impede a woman’s access to abortion, including by repealing the Hyde Amendment.” This represents a shift by Kaine, who has supported the Hyde Amendment in the past.

Trump’s document makes four promises: that as president, he would nominate pro-life Supreme Court justices; that he would sign into law a 20-week abortion ban known as the Pain-Capable Unborn Child Protection Act; would support stopping federal dollars from going to Planned Parenthood “as long as they continue to perform abortions”; and support making the Hyde Amendment permanent law. Each year the ban on using federal funds for abortions must be approved as a rider on the appropriations bill.

In the vice presidential debate Oct. 4, Trump’s running mate, Indiana Gov. Mike Pence, an evangelical Christian, remarked, “I think if you’re going to be pro-life, you should be pro-adoption.” Kaine said he believed that women should make their own decisions about pregnancy.

On the issue of the death penalty, the Democratic Party’s platform calls for its abolition. The Republican Party platform calls it “firmly settled” as a constitutional issue, and additionally, condemns the U.S. Supreme Court for what it calls the “erosion of the right of the people to enact capital punishment.”

It remains an issue for voters in several states, with referendums on the death penalty on ballots in California, Nebraska and Oklahoma. Nebraska voters will decide if they want to keep the state’s ban on capital punishment as voted in by the Legislature; Nebraska’s governor vetoed it, lawmakers overrode the veto then the issue went to the ballot to have voters decide.

California’s Proposition 62 calls for replacing it with life imprisonment with no chance for parole, and Oklahoma voters are being asked if they want to add the death penalty to the state’s constitution.

In all three states, priests were expected to address the issue as a pro-life matter from their pulpits.

“In the past,” says a statement from the California Catholic Conference, capital punishment “was sometimes morally justified in order to protect society, but those times have passed.” California bishops also are asking voters to say no to Proposition 66, which would expedite the review of death penalty cases.

“Any rush to streamline that process will inevitably result in the execution of more innocent people,” the conference said.

Kaine, the only Catholic among the four national candidates, has been outspoken on the death penalty. He defended death-row inmates and opposed the death penalty as a lawyer. As governor of Virginia, however, he approved 11 executions and granted clemency in only one appeal. He says he remains personally opposed to the death penalty but pledged to uphold the law in Virginia.

“And I’ll also feel bad just because I think it’s outrageous that there is the death penalty,” he said in July 1987 after his client, inmate Richard Lee Whitley, went to Virginia’s electric chair. “It’s not the biggest outrage in the world, but it’s one of a number of outrageous (things) where people don’t appropriately value the sanctity of human life.”

Pence supports the death penalty, but there have been no executions while he has been governor of Indiana. The last execution in that state was in 2009.

“Forming Consciences for Faithful Citizenship,” the U.S. bishops’ document on political responsibility that guides Catholics on election decisions, states: “Society has a duty to defend life against violence and to reach out to victims of crime. Yet our nation’s continued reliance on the death penalty cannot be justified.”

On the issue of assisted suicide, the Republican platform opposes euthanasia; the Democratic platform, as in past years, has no language on it. The Republican document states, “We oppose the nonconsensual withholding or withdrawal of care or treatment, including food and water, from people with disabilities, including newborns, as well as the elderly and infirm, just as we oppose active and passive euthanasia and assisted suicide.”

“Faithful Citizenship” calls assisted suicide “intrinsically evil,” ranking it with abortion, and adds, “It is a mistake with grave moral consequences to treat the destruction of innocent human life merely as a matter of individual choice.”

PREVIOUS: Puerto Rican bishops call all voters to be discerning in Nov. 8 election