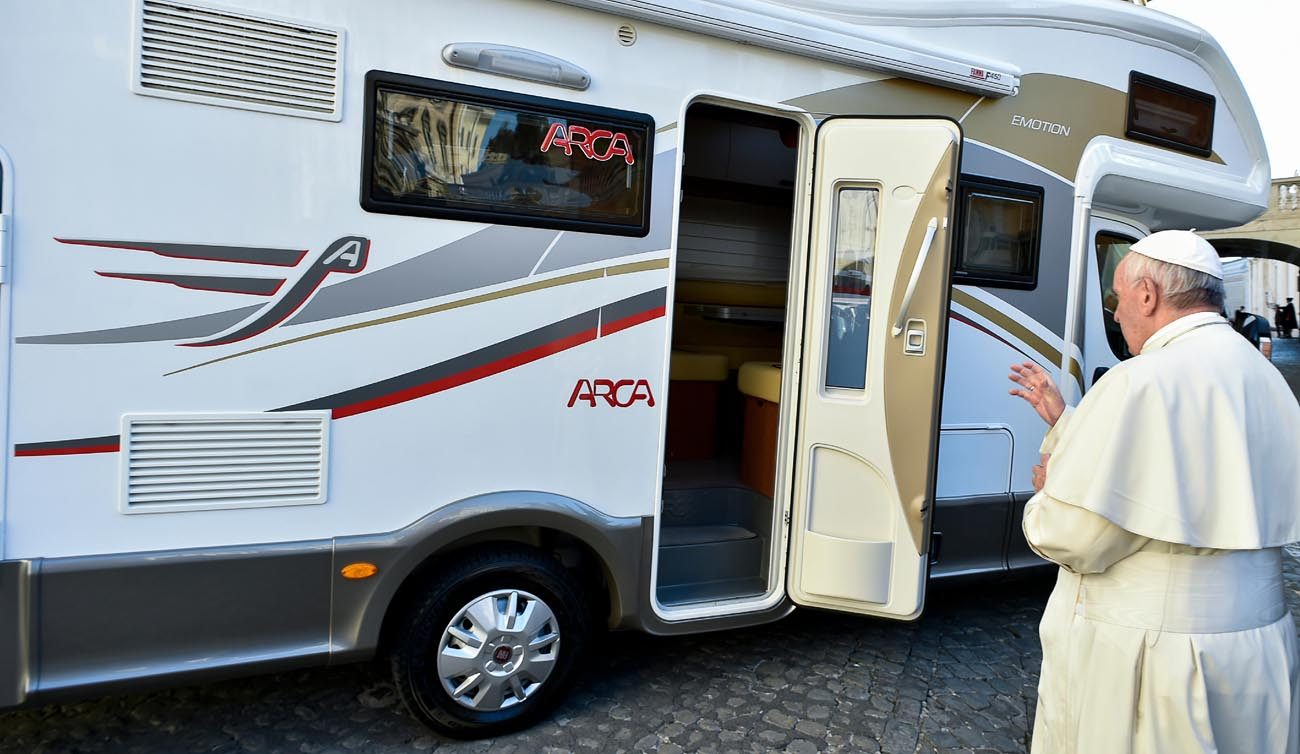 Pope Francis blesses a camper before a jubilee audience at the Vatican Oct. 22. The camper was donated to the pope for use by the Diocese of Rome in the service of the needy. (CNS photo/L'Osservatore Romano, handout)

VATICAN CITY (CNS) — Dialogue is an essential component of mercy because it is the only way a husband and wife can understand each other, people of different religions can live in peace and the only way the Catholic Church can evaluate what is needed to promote the common good in the world, Pope Francis said.

Good relations between husbands and wives, parents and children, employees and bosses, he said, require one “to listen, explain with meekness, don’t bark at the other, don’t yell, but have an open heart.”

Pope Francis spoke about the importance of dialogue and marked the feast of St. John Paul II Oct. 22 with a special Year of Mercy general audience in and around St. Peter’s Square. With about 100,000 people in attendance, according to Vatican police, the crowd overflowed the square. Making his rounds in the popemobile at the beginning of the audience, Pope Francis made sure to drive part way down the main boulevard outside the square to greet people.

In his main audience talk, Pope Francis said dialogue is an important aspect of mercy; it is what “allows people to know each other and understand the needs of the other.” In addition, “it is a sign of great respect,” because it involves listening to the other and making the effort to see the good in what the other is saying.

“Dialogue calls us to place ourselves before the other, seeing him or her as a gift of God,” the pope said.

“We don’t dialogue when we do not listen enough or when we interrupt the other to prove that we are right,” he said. “How many times when we are listening to someone, we stop them and say, ‘No. No. No, that’s not right,’ and we don’t let the person finish.”

Such an attitude, he said, is “aggression.”

The church, too, is called to dialogue, Pope Francis said. Listening is the only way to know what is in the other’s heart and what the other needs.

Dialogue is an expression of God’s love, which reaches out to each person, sowing seeds of goodness, he said. “Dialogue tears down walls of division and misunderstanding, creates bridges of communication and does not allow anyone to isolate him- or herself.”

Thousands of pilgrims from Poland attended the audience, which occurred on St. John Paul II’s feast day, the anniversary of the day in 1978 that he formally inaugurated his ministry as pope.

Saying St. John Paul tirelessly proclaimed “the Gospel of mercy,” Pope Francis offered special prayers that the late pope would intercede to help young people face the challenges in their lives, help the sick “embrace with hope the cross of illness” and fill with love the families newlyweds are just starting.