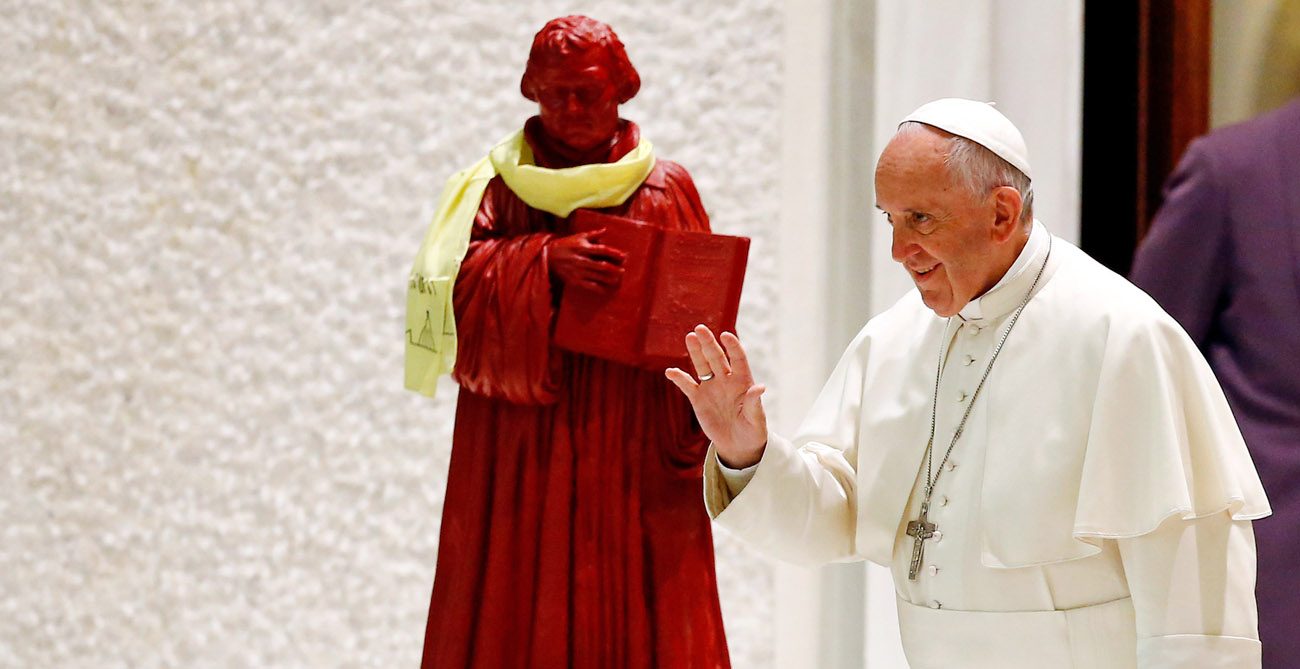 A statue of Martin Luther is seen onstage as Pope Francis arrives for an audience with a pilgrimage of Catholics and Lutherans from Germany in the Paul VI hall at the Vatican Oct. 13. The pope will visit Sweden Oct. 31-Nov. 1 for commemorations of the 500th anniversary of the Protestant Reformation. (CNS photo/Stefano Rellandini, Reuters)

VATICAN CITY (CNS) — Pope Francis’ recent insistence on “walking ecumenism,” the notion that Christians will draw closer to each other as they work together to help the poor, should resonate well with Lutherans and Catholics in Sweden.

“Swedes are known to be people of consensus, pragmatic, so people try to cooperate even if they have different views and backgrounds,” said Bishop Anders Arborelius of Stockholm, the country’s only Catholic bishop and the first native Swede to hold the post since the Protestant Reformation.

More than 60 percent of Swedes are baptized members of the Lutheran Church of Sweden and just over 1 percent are registered members of the Catholic Church, although Bishop Arborelius said that with the ever-increasing number of immigrants in the country, the number of Catholics probably is double the official 115,000.

Still, Sweden has become almost famous for being one of the most secular countries in Europe. In surveys, less than a third of Swedes describe themselves as religious and even fewer participate regularly in church services.

However, “even in the secular society, there are certain Christian values that are very much alive — this wish to help poor people, to protect those who are in danger and to establish equal rights for everyone,” Bishop Arborelius told Catholic News Service Oct. 18.

The Rev. Michael Bjerkhagen, official chaplain to the king of Sweden, agreed. “A Christian religious attitude still permeates many ‘secular’ Swedes,” he said in an email interview. “It shows in how they think and speak, what values they have and what they choose to do,” marking everything from opening sessions of Parliament with a service in the Lutheran cathedral to local parish celebrations of the end of each school year.

Pope Francis will visit Lund and Malmo on Sweden’s southern tip Oct. 31-Nov. 1, mainly to participate in an international, ecumenical launch of commemorations of the 500th anniversary of the Protestant Reformation.

The pope has insisted Christians cannot pass all responsibility for building Christian unity onto theologians participating in official bilateral dialogues. The prayer of all Christians is essential, he has said, and so is friendship. “Walk together, pray for each other, and do works of charity together when you can. This is ecumenism,” he said in Georgia in early October.

“People are very excited” about the pope’s visit, Rev. Bjerkhagen said. “Since the Holy Father is a living symbol for unity for many of us, we expect a lot! And particularly from this pope, who has shown such a strong and brave leadership in so many ways: his solidarity with refugees and poor people; the very honest interest he has shown toward other Christian churches; his open attitude on social-ethical matters; his humble and easygoing way of approaching people.”

The Lutheran chaplain and the Catholic bishop both said friendship is something that is plentiful among Lutherans and Catholics in Sweden. In fact, Bishop Arborelius said, his growing diocese does not have enough churches and so many Catholic Masses, especially in rural areas, are celebrated in Lutheran churches.

The bishop said he hopes Pope Francis’ popularity among Swedes and his visit will help the nonreligious “see that a Christian person can be very welcoming and very open, even if he sticks to his faith.”

“Lately there are more and more voices saying religion brings intolerance, violence, conflict,” he said. “Before, they looked upon religious people as, well, very tame, a bit stupid, but now they tend to say religion can make people violent.”

While the growth of the Catholic Church in Sweden is due mainly to immigrants, including Chaldean and Maronite Catholics from the Middle East, Bishop Arborelius is part of the smaller, but steadily growing segment of Swedes who have joined the Catholic Church after being baptized Lutheran.

“Not very active” as a Lutheran, he always felt drawn to “the contemplative life or spirituality,” the bishop said. “I always had this longing for a life of prayer and silent adoration.”

His family’s contact with the Bridgettine sisters had a deep influence on him, he said, and eventually he began taking courses in the Catholic faith. Entering the Catholic Church at the age of 20, he said, “I had some longing to be a priest — many converts have this idea,” but the local bishop urged him to wait. He entered the Discalced Carmelite novitiate less than two years after becoming Catholic.

Traditionally in Sweden most converts come from university circles, Bishop Arborelius said, and are attracted by the Catholic Church’s embrace of reason, its theological depth and its social doctrine. “Somehow they think the Catholic Church is a bit more serious about these things, so it’s quite common that people who are very well educated, if they turn to Christian faith, they go to a Catholic church.”

NEXT: Sorrow and joy: Marking the Reformation with honesty about the past