In Turkey, Iraqi Christians waiting for resettlement live in limbo 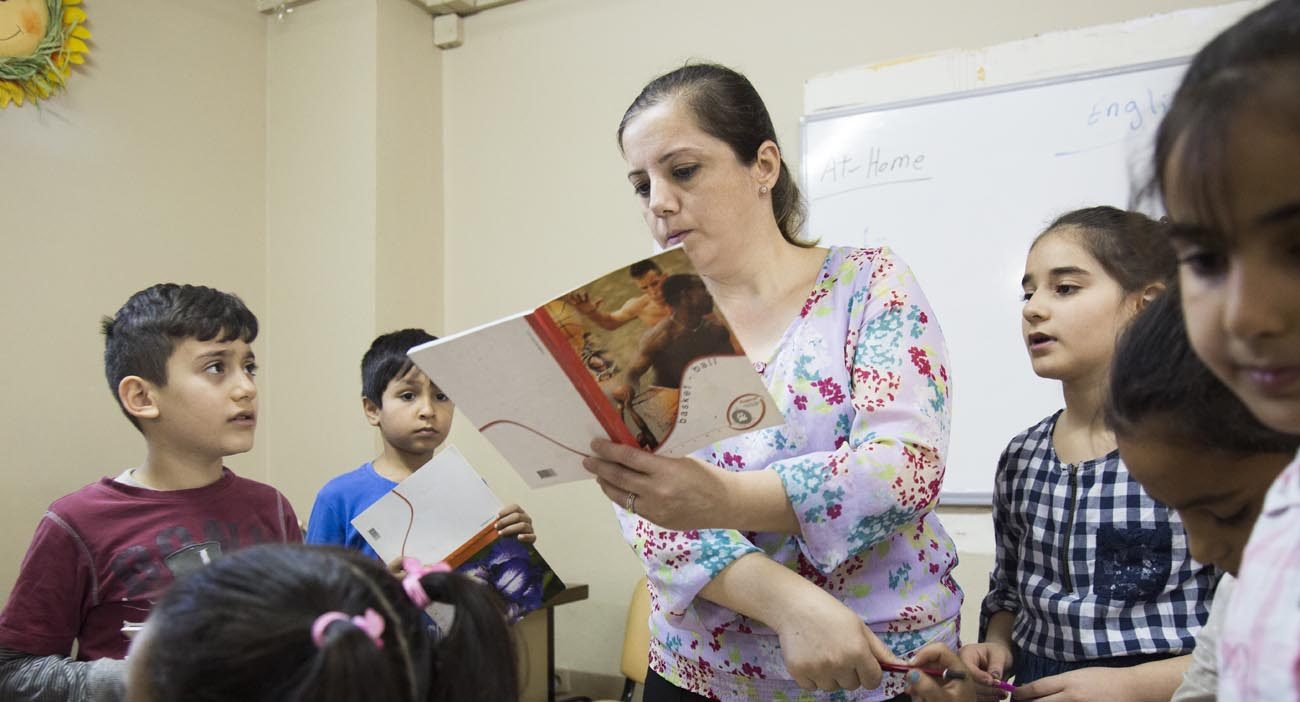 Basima Kamil, 42, a refugee from Iraq, teaches English Oct. 3 at the Don Bosco Youth Center in Istanbul. The children at this center are refugees mostly from Syria and Iraq. Kamil has been in Turkey since December 2012, waiting for an answer to her relocation application to Canada. (CNS photo/Oscar Durand)

ISTANBUL (CNS) — Yako Hanna, 36, always keeps an eye on his phone waiting for a call that would change his life.

“Anytime it rings, you think it is the U.N., so you have to be careful. Even if you go to the bathroom, you have to take your mobile with you,” Hanna said, referring to the call he might receive from the U.N. refugee agency, UNHCR, which is handling his resettlement application to Australia, where he has relatives.

Hanna is one of the thousands of Iraqi Christians that are in Turkey waiting, from a few months to a few years, for an answer to their resettlement applications to Western countries. They are waiting for an appointment or a visa, a document that will allow them to restart their lives in a new country. And not knowing when that will happen is leading them to live a life in limbo.

Hanna grew up in a Chaldean Catholic family in the al-Dora district of Baghdad. The memories from his childhood include summer picnics, soccer games and other activities organized by his neighborhood church, St. Jacob.

Starting in 2004, car bombs, killings and attacks on Christians in Iraq become common. In 2007, St. Jacob — the church Hanna had attended for 22 years — was attacked, marking the beginning of his odyssey. He moved to a safer neighborhood in Baghdad and, when the situation worsened there as well, he fled to Tel Kaif in northern Iraq, just north of Mosul. In 2014, the Islamic State group attacked the town, and Hanna fled to Turkey.

Once in Turkey, Hanna registered with UNHCR and the Turkish government. Under Turkish law, only asylum seekers from Europe qualify for refugee status. Iraqis are eligible to receive what is called an “international protection” status, which allows them to stay in Turkey as they wait for resettlement to a third country.

Being resettled is not easy or quick.

According to UNHCR, in 2015, there were more than 7,500 people resettled out of Turkey; more than 6,400 were from countries other than Syria. Turkey hosts more than 3 million refugees; about 400,000 are non-Syrians. Although the exact number of Iraqi Christians in Turkey is unknown, it is estimated that there are at least 40,000.

For Hanna, the process to officially become a refugee and seek resettlement involved paperwork, travel and multiple interviews. His file was finally completed July 21, two years after he landed in Turkey.

“The first year was the worst year of my life. My future was unknown. What would I do for work? What would happen when I face a problem here? So many strange thoughts. I cried many times. I had to start not from zero but from under zero,” Hanna said.

He said he hopes that the next time the phone rings, it is a call with a positive answer to his case.

“I think it will be no less than six months. If they told me four months, it would be a miracle. I cannot guess,” he said.

Meanwhile, Hanna has found a temporary home with the Iraqi Catholic community in Istanbul. He keeps busy teaching English to refugee children, mostly from Iraq and Syria, at the Don Bosco Youth Center in Istanbul. Most of the other instructors are also from Iraq.

Basima Kamil, 42, also teaches English at the center. She is from Baghdad and has lived in Istanbul with her husband and four children since December 2012. With violence and threats toward Christians all around them, they felt they had no other option but to leave Iraq.

Once in Istanbul, Kamil and her family followed the resettlement process that is known to the Iraqi refugee community. Their first interview with UNHCR was in September 2014, almost two years after they landed in Istanbul.

When they met with Canadian officials, Kamil felt closer to her dream of finding a safe home for her family. After that interview in October 2015, Kamil was told that the next time she would be contacted, it would be for her to move to Canada.

“And since then, we are waiting,” Kamil said.

Kamil worries about her children’s education. They are between 15 and 22 and she believes that, as years pass by, so do their opportunities.

“I worry about their studies. I want them to continue studying, but I am afraid that they won’t,” Kamil said.

Kamil said she is determined to continue moving ahead, even if her application is denied.

“I cannot go back to Iraq. Now there are even fewer Christians. And I have daughters, it is more difficult for them,” Kamil said.

Hanna also said he does not contemplate giving up if his resettlement application is rejected. But in the meantime, he is wasting no time. While not teaching at the Don Bosco Youth Center, he is taking Turkish lessons and is looking for a school to learn to become a barber.

“The more difficult thing is keep waiting and postponing your dreams. Until when? You don’t know. But day by day, you get used to,” Hanna said.

NEXT: Religious called to be prophets of communion, pope says