Mary’s life is a lesson in trusting God, pope says 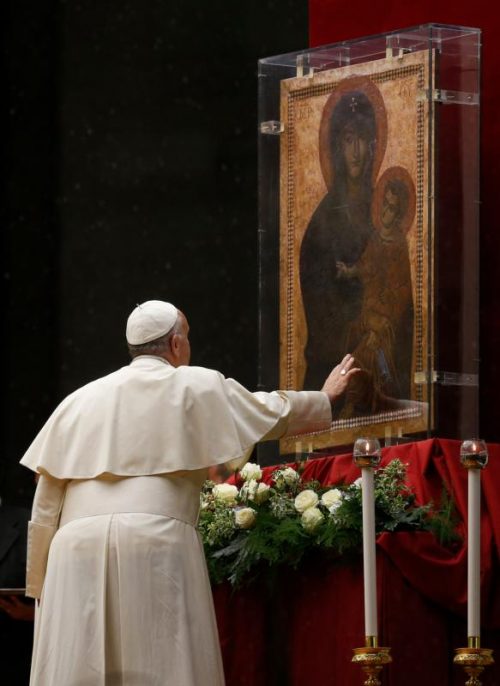 VATICAN CITY (CNS) — Imitating Mary’s life of humility and gratitude, men and women in the church must place complete trust in God’s will and not in material possessions or intellectual prowess, Pope Francis said.

In choosing Mary to bear his son, God chose “a simple young woman of Nazareth, who did not dwell in the palaces of power and wealth, who did not do extraordinary things” yet placed complete trust in him, the pope said Oct. 9 during a Holy Year Mass with pilgrims who have a special devotion to Mary.

“Let us ask ourselves — it will do us good — if we are prepared to accept God’s gifts, or prefer instead to shut ourselves up within our forms of material security, intellectual security, the security of our plans,” the pope said during his homily.

The Mass capped off a weekend of events dedicated to Mary, including a concert and a prayer vigil presided over by the pope Oct. 8.

The vigil began with testimonies on the importance of the mother of Christ and a procession of delegations from Marian shrines around the world bearing local representations of Mary, including Italy’s Our Lady of Pompeii and Mexico’s Our Lady of Guadalupe.

The final image in the procession was an icon of Mary and the child Jesus beloved by Romans as well as by Pope Francis, the “Salus Populi Romani” (“health of the Roman people”). Rosary in hand, the pope didn’t wait for the image to be brought up to the stage, but went down the steps, reverently bowing before the icon before it was placed on a red pedestal adorned with flowers.

Seated facing the famed icon, the pope joined thousands of pilgrims in prayer and delivered a meditation in which he described the prayer of the rosary as “the synthesis of the history of God’s mercy.”

In contemplating the life of Jesus through the mysteries of the rosary, he said, Christians also are reminded of Mary’s presence and her acceptance of God’s will, even in the most difficult of circumstances.

“Praying the rosary does not remove us from the problems of life. On the contrary, it demands that we immerse ourselves in the history of each day, so as to grasp the signs of Christ’s presence in our midst,” the pope said.

Mary, he continued, shows what it means to be a disciple of Christ, first by listening to him and becoming a “living memory of the signs worked by God’s son to awaken our faith.”

However, like Mary, a true disciple does not only listen but also puts God’s word into “concrete action,” he said.

Mary’s faith, he said, teaches Christians how to live.

“In her faith, we learn to open our hearts to obey God; in her self-denial, we see the importance of tending to the needs of others; in her tears, we find the strength to console those experiencing pain,” the pope said.

In his homily during the closing Mass of the Marian jubilee, Pope Francis reflected on the first reading in which Naaman praises God after having been miraculously healed of his leprosy and on the Gospel story of Jesus healing 10 lepers.

Despite their miraculous healing, “all but one, a Samaritan, a foreigner living on the fringes of the chosen people, practically a pagan,” returned to give thanks to Jesus, the pope said.

“It is easy to approach the Lord to ask for something, but to return and give thanks? That is why Jesus so emphasizes the failure of the nine ungrateful lepers,” he said.

Like Naaman and the Samaritan, Mary experienced living as a foreigner in Egypt yet, through her faith, she was able to overcome the difficulties.

“How many foreigners, including persons of other religions, give us an example of values that we sometimes forget or set aside!  Those living beside us, who may be scorned and sidelined because they are foreigners, can instead teach us how to walk on the path that the Lord wishes,” the pope said.

NEXT: Personal conversion needed to serve others, pope says