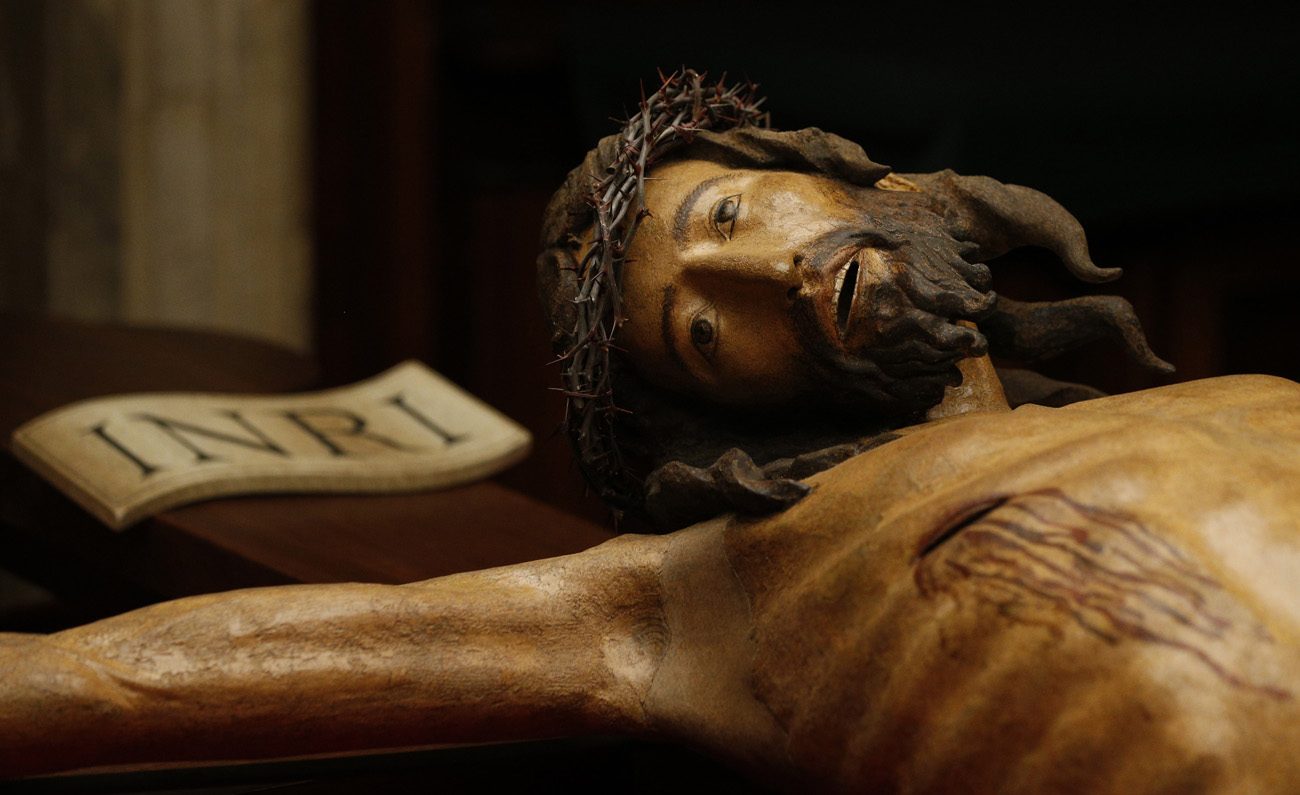 VATICAN CITY (CNS) — His toes curl in pain, his veins bulge from exertion, his bony chest heaves in the last throes of death.

The newly restored 14th-century wooden crucified Christ “has been resurrected” from obscurity — once caked over with dark paint and left forgotten behind an elevator shaft, said Cardinal Angelo Comastri, archpriest of St. Peter’s Basilica.

“We have discovered a hidden treasure under the dust of many centuries,” he told reporters at a Vatican news conference Oct. 28.

The oldest crucifix in the basilica’s possession, it was made by an unknown sculptor of “exceptional artistic talent” and technical skill sometime in the early 1300s, and hung in the original fourth-century basilica of St. Peter, built by the Emperor Constantine, said Bishop Vittorio Lanzani, secretary of the Fabbrica di San Pietro, the office responsible for physical care and maintenance of St. Peter’s Basilica.

The 7-foot-long torso and legs were made in one piece from a solid trunk of seasoned walnut, he said. The arms — spanning nearly 6 and a half feet — and head were carved separately but came from the same already centuries’ old tree.

Antique prints and a rich trail of archival material track the crucifix’s condition and its various locations inside the old basilica and its transfer to the new basilica when it was completed in 1620. The documents show that no matter where it was positioned, it was a popular and much-venerated piece of work, the bishop said. 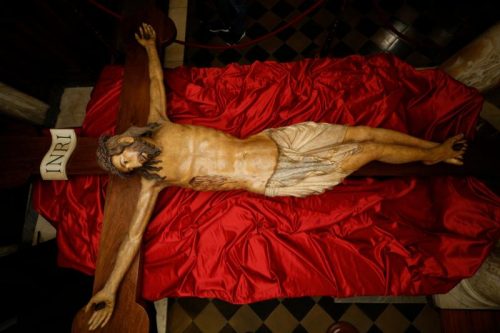 It even managed to survive the Sack of Rome in 1527 and desecration when the basilica was turned into a “horse stable” and the Christ figure was dressed in the uniform of the invading mercenaries, he said.

Though made of strong solid wood, he said, termites feasting on it for 700 years caused considerable damage, leaving bore holes peppering the face and body and excavating large areas by the armpits.

Moved in 1749 to make way for Michelangelo’s marble masterpiece, the Pieta, the progressively darkening statue was gradually moved further and further away from the main area of the basilica, eventually ending up in closed chapel.

Even worse, Bishop Lanzani said, Pope Pius XI had an elevator put in the closed chapel to connect the basilica with the papal residence above in the apostolic palace.

“Darkened and confined in a neglected spot and nearly unreachable, it was forgotten by many and was in some way taken away from the devotion of the faithful,” he said.

When Pope Francis called the Year of Mercy, the basilica accelerated plans to have the crucifix studied and restored, which took 15 months of difficult and delicate work, Cardinal Comastri said. Because moving it too far from where it had been abandoned was too risky, the canon’s sacristy nearby was turned into a makeshift restoration studio.

With funding from the Knights of Columbus, restorers used thermal lasers to blast off one layer of paint at a time and “cutting-edge” solvents that dissolve specific substances like oils, lacquers and grime, leaving desired colors unaltered, said one of the lead restorers, Lorenza D’Alessandro. 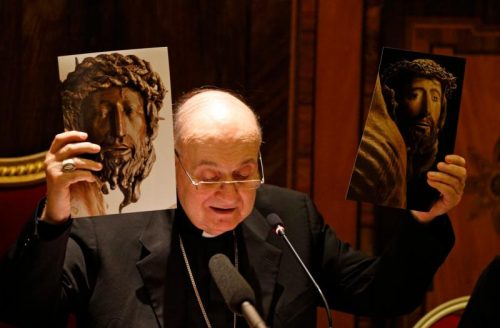 Experts monitored their progress with stereo microscopes — which are often used in microsurgery — to make sure they removed only selected areas and layers. She said they identified nine successive layers of paints, varnishes and protective coatings on the body and 15 layers on the white, gold-bordered loincloth.

They filled the gaps, she said, by mixing the sawdust left behind by the termites with a binding material that was then shaped to the body. They replaced a thick painted rope that had been wrapped around Christ’s head with a crown of real thorn branches from a species known as Christ’s Thorn found near the Mediterranean.

The original cross the Christ had been nailed to was lost long ago, she said, so workers at the Fabbrica crafted a new one from seasoned walnut wood that had grown near an ancient Marian sanctuary in central Italy.

Cardinal Comastri said the newly restored crucifix will be shown to the public for the first time Nov. 6 during Pope Francis’ jubilee for prisoners to be “a beautiful sign of hope and a message of mercy.” 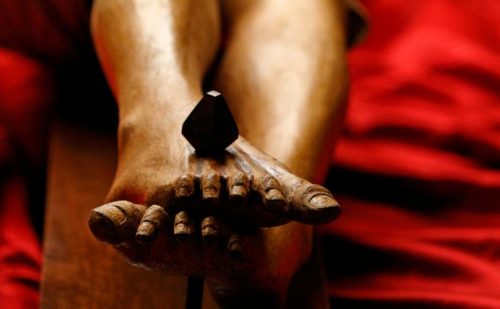 The feet of a wooden crucifix from the 14th century are seen during a media opportunity to showcase its restoration in St. Peter’s Basilica at the Vatican Oct. 28. (CNS photo/Paul Haring)

It will then be placed back in the main part of the basilica in the Chapel of the Blessed Sacrament and dedicated in “perpetual memory of the Jubilee of Mercy.”

It will be hung on the wall to the left of the entrance, so when people enter, they will immediately be met by Christ’s gaze at the very moment he readies himself to give his life for all of humanity, he said.

The Knights provided the funding for its restoration to show “solidarity with the Holy Father” for the Year of Mercy, said Carl A. Anderson, supreme knight of the Knights of Columbus.

In a written statement, he said, “We hope that this remarkable image of Christ’s suffering will serve as a reminder to all who see it of the great love our savior has for each of us, and of the depths of his mercy, always ready to embrace and forgive us.”

PREVIOUS: Pope on why he’s going to Sweden: ‘Closeness does all of us good’