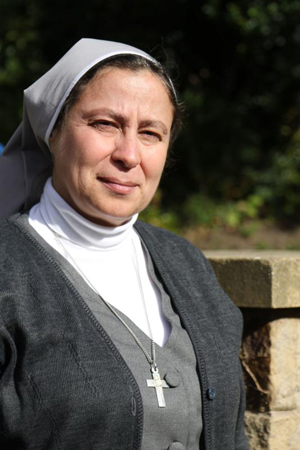 Sister Annie Demerjian, a member of the Sisters of Jesus and Mary who is working with Christian families in Aleppo, Syria, poses for a photo Oct. 10 in Lancaster, England. (CNS photo/Simon Caldwell)

LANCASTER, England (CNS) — A religious sister working with Christian families in Aleppo, Syria, has criticized Western media for their allegedly biased coverage of the six-year conflict.

Sister Annie Demerjian, a member of the Sisters of Jesus and Mary, questioned why Western journalists focused on the plight of people in areas held by rebels and jihadis but seldom those in regions controlled by the government of Bashar Assad.

“It is not fair,” she told Catholic News Service in an Oct. 10 interview in Lancaster.

“We don’t see a balance,” she said. “Last week nobody spoke about a (Christian) woman who pulled her son from a balcony without his head, and just a river of blood coming out of his neck.”

She said the adult son had rushed outside when a rebel shell had landed nearby and he heard shouts in the street. His head was blown off when the area of government-controlled western Aleppo, the largest city in Syria, was struck by a second shell.

“His mother was crying, ‘Come in, come in,'” said Sister Annie. “She pulled him to find he had no head. Nobody spoke about that, nothing. There are many stories like that. It is very painful when shells are falling in residential areas. Many people die.

“Sometimes their families and friends have to collect the pieces of the bodies — a hand here, a leg there, body parts in other places — but nobody is talking about it,” she said. “Why is the world silent about it? People don’t know what is happening.”

“They are living in fear most of the time and also the hope that one day there will be peace. Parents, when they send their children to school, say goodbye like they will not see each other again because they know that at any time rockets or shells might fall on top of us.”

Her comments came as governments in the West stepped up their criticism of the bombardment by Syrian forces of rebel positions, with the help of Russian jets.

The rebels, along with Islamic State fighters and militants of the Nusra Front — a former affiliate of al-Qaida — have surrounded the city and have constantly attacked the government regions where all of the Christian inhabitants are sheltering.

But amid concerns that civilians in rebel areas are being targeted by Assad and his allies, Samantha Power, the U.S. ambassador to the United Nations, in late September described Russian intervention in Aleppo as “barbarism.”

Russia announced Oct. 11 that President Vladimir Putin has canceled a visit to France scheduled for mid-October after the French government suggested that his forces were guilty of war crimes.

In the U.K., former government minister Andrew Mitchell, speaking Oct. 11 during a three-hour emergency debate on the battle for Aleppo, compared Russia to Nazi Germany and said it would be right to shoot down Russian planes to protect civilians.

Just a day earlier, Maj. Gen. Igor Konashenkov of the Russian Ministry of Defense told the U.K. that Russia was “achieving results” against terrorists.

“Where was Great Britain when ISIS almost reached the shores of the Mediterranean, almost turning Syria into a terrorist caliphate — in the same way that happened in Libya thanks to your efforts?” he said in an Oct. 10 statement.

In her interview with CNS, Sister Annie, 49, said civilians on both sides were suffering from the fighting in Aleppo.

“There are shells and bombs from everywhere falling all over Aleppo,” she said. “Both sides are suffering, yes.”

But she said she would like journalists to better reflect the plight of all civilians in what they reported “in their newspapers, in their interviews.”

She added: “I wish and I hope that everybody — all those who have power to intervene in Syria — will act as peacemakers and think about how they can make peace in Syria and especially in Aleppo.

She continued: “This is the message from my people: Please, please be the makers of peace. It is not just for Syria, it’s for the whole world.”

Sister Annie, who was in England as a guest of Aid to the Church in Need and who was scheduled to address politicians in the Houses of Parliament Oct. 17, said Christians and Muslims lived in harmony before the war.

“We lived in the same areas, we called each other brothers and sisters. … We didn’t have divisions between Muslims and Christians before. This is new.”