Pope: Simple gestures, not superpowers, needed to start a revolution 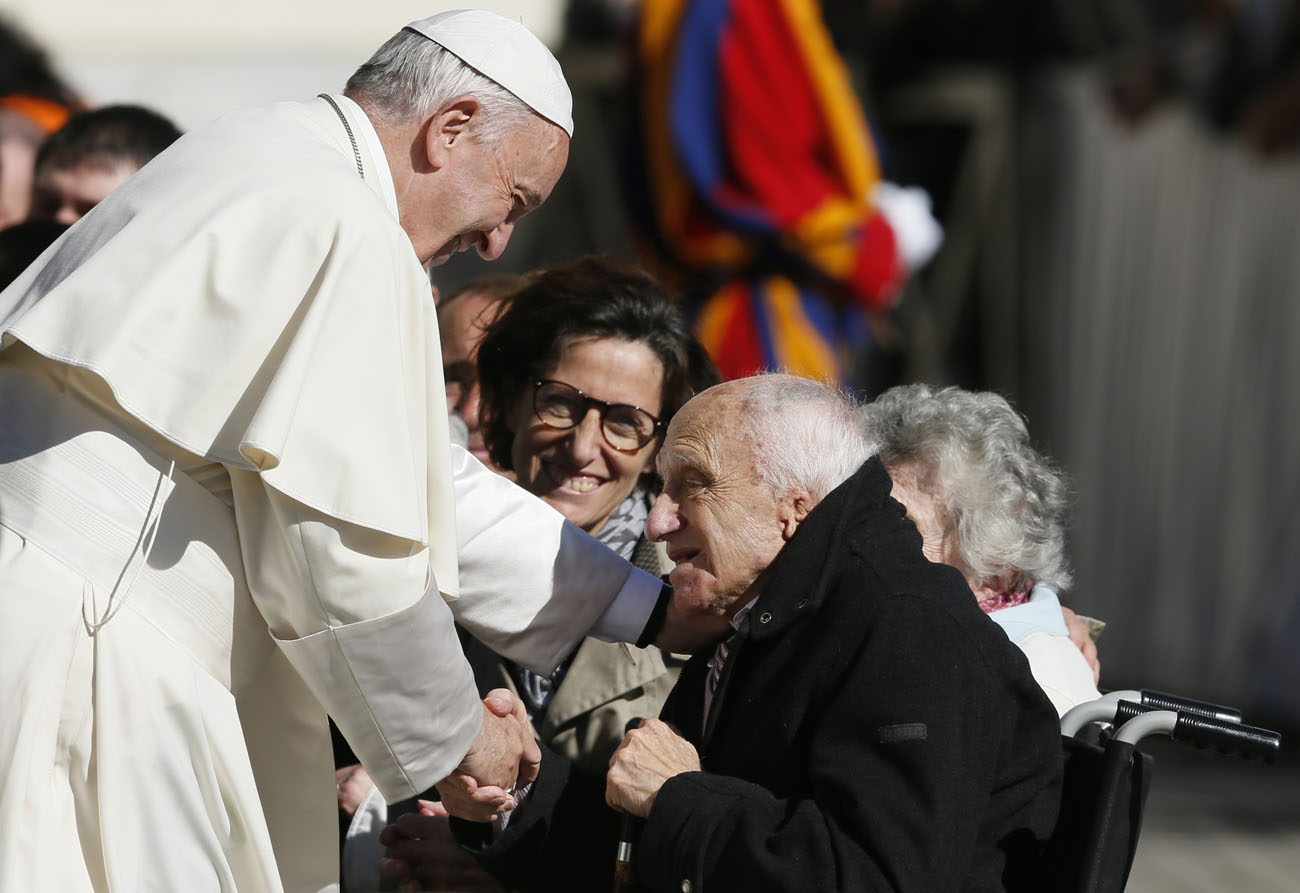 Pope Francis greets a man in a wheelchair during his general audience in St. Peter's Square at the Vatican Oct. 12. The pope called for an immediate cease-fire in Syria so that civilians can be rescued. (CNS photo/Paul Haring) .

VATICAN CITY (CNS) — All it takes is just one person carrying out one simple, loving act of mercy every day to start a revolution and stamp out the “virus of indifference,” Pope Francis said.

Sharing God’s mercy is not about expending a huge amount of effort or performing “superhuman” acts, he said during his general audience Oct. 12 in St. Peter’s Square.

Jesus showed with his words and deeds that it’s much simpler than that: It’s about making “small gestures that in his eyes, however, hold great value, so much so that he told us we will be judged upon these” actions, the pope said.

As he continued his series of talks about God’s mercy, the pope said he would begin looking at each one of the seven corporal and seven spiritual works of mercy in the following weeks.

The audience began with a reading from the Gospel of Matthew’s “Judgment of the Nations” (25: 31-46) in which Jesus tells his disciples they will be blessed with eternal life for helping the hungry, the thirsty, the stranger, the naked, the ill and the prisoner because “whatever you did for one of the least brothers of mine, you did for me.” Those who do not bother to help will “go off to eternal punishment.”

“Jesus is always present there where there is a need, a person who is in material or spiritual need,” the pope said.

Works of mercy are concrete ways to show mercy and be genuine witnesses of the faith, he said.

“I am convinced that through these simple daily gestures we can achieve a true cultural revolution,” the pope said, as he urged each and every person to carry out at least one work of mercy each day.

Be aware of simple, daily cries for help, he said, and don’t brush them off saying, “‘Oh, God will help you, I don’t have time.’ No. I stop. I listen. I waste time and I console.”

“This is a gesture of mercy and is done not just for (the person in need) but for Jesus,” he said.

So many saints are remembered not for their grand achievements, the pope said, but for their modest, loving ways.

When people think of St. Teresa of Kolkata, for example, they don’t think about the many homes she ran, but rather the way she embraced an abandoned child, kneeled before a homeless person or accompanied the dying by holding their hand.

But a person does not have to go as a missionary to a far-off land to help, the pope said. “Often it is those who are closest to us who need our help.”

“We don’t have to go seeking who-knows-what challenge” to tackle, he said; it’s better to start with the simplest things, which, the Lord shows, are often the most urgent.

“In a world unfortunately hit by the virus of indifference, the works of mercy are the best antidote,” and they draw people’s attention to the importance of meeting people’s most basic needs, he said.

Pope Francis recalled St. Augustine’s words: “I fear Jesus passing by,” and how it reflects the human tendency to often be distracted or indifferent so that “when the Lord passes by, we lose the opportunity to encounter him.”

“Let us learn once more by heart the corporal and spiritual works of mercy and let us ask the Lord to help us put them into practice every day,” the pope said.

The spiritual works of mercy are: counsel the doubtful; instruct the ignorant; convert the sinner; comfort the sorrowful; forgive offenses willingly; bear wrongs patiently; and pray for the living and the dead.

The corporal works of mercy are: feed the hungry; give drink to the thirsty; clothe the naked; visit the imprisoned; shelter the homeless; visit the sick; and bury the dead.