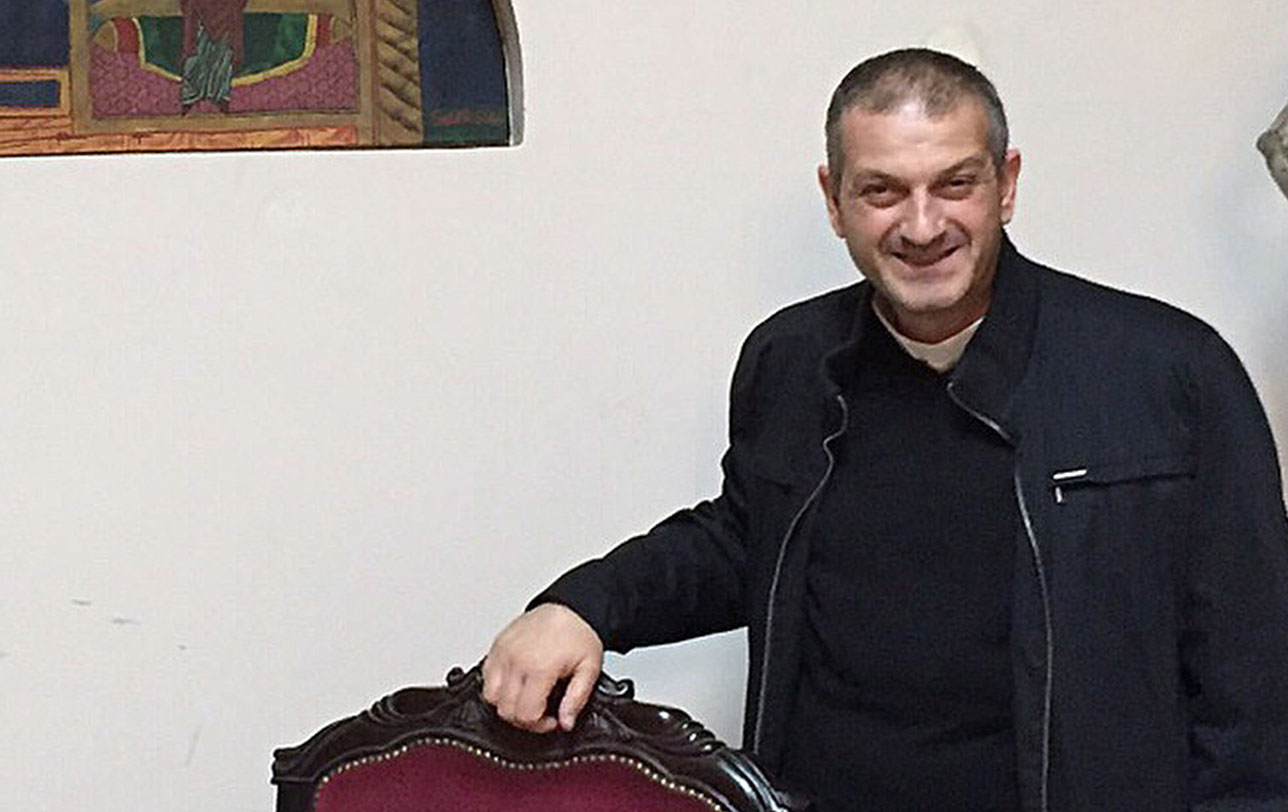 Father Jacques Mourad poses for a photo Nov. 11, 2015 in the reception area at Our Lady of the Annunciation Church in Beirut. The Syriac-Catholic priest, who was held captive by the Islamic State group for nearly five months in 2015, called on Canada to undertake diplomatic steps to end the Syrian civil war. (CNS photo/Doreen Abi Raad)

MONTREAL (CNS) — Canada and Western nations can and must do more to stop the war in Syria, said Father Jacques Mourad, a Syriac Catholic priest who was abducted and held captive for nearly five months by the Islamic State group.

Father Mourad whose escape last year received worldwide coverage, had a specific message for Canadians during a visit to Montreal and Ottawa, Ontario, Oct. 22-25. It was his first trip to Canada.

Shortly after his liberation, Father Mourad fled Syria, fearing for his life. He now travels in Western countries discussing the complexities of the war in his homeland.

“Before my abduction, I was in my monastery totally immersed in my work and spiritual mission. I lost everything: my monastery, my parish. I can’t live any longer in such a warn-torn country,” he said.

The Monastery of St. Elian was built in the 5th century. It was abandoned in the 18th century but was revived in the 1980s by Jesuit Father Paolo Dall’Oglio, an Italian who founded an ecumenical and interreligious community in Mar Musa, near Homs, in western Syria. Father Dall’Oglio was kidnapped by the Islamic State in 2013 and remains missing.

At the time of his abduction in May 2015, Father Mourad was the superior of the monastery. On Aug. 21, 2015, ISIS destroyed both the monastery and a nearby cemetery.

“Canada could play an active role and help put an end to the war in Syria. It’s not enough to open your arms and the borders to the (Syrian and Iraqi) refugees. It’s of course a good thing and I’m thankful. Yet the last thing we want to do is to leave our country. We have everything we need to live decently in Syria,” he said.

“Canada is an important country in the world today. Canada has an influential voice in diplomatic circles that can build bridges between America, Europe and even Russia, I believe. For that, I think that if the Canadian government and people truly wish to stop the violence and war they sure can do something about it. They can save the lives of many people”, Father Mourad said.

Citing’s Canada’s diplomatic strength around the world, Father Mourad suggested that if the government and the Canadian people “are serious in their will to stop violence and war, they can do something. They can save those people (in Syria).”

“It’s impossible for (Western) countries to look at this evil and do nothing. Welcoming refugees is good, but it’s not the solution. The solution is to stop the war,” he added.

The Syrian priest was held captive by the Islamic State for 4 months and 20 days. He was tortured, went through a fake execution and lived in constant fear of being beheaded. His captives gave him some rice to eat, twice a day.

“Someone who’s lived freely for all his life, who’s had responsibilities, etc., suddenly finds himself being captive, stuck in a little room, beaten and threatened daily, by people he doesn’t even know … I felt ashamed, nervous and scared,” he said.

Then, on the eighth day, Father Mourad lived a “rather unique and experience” with a stranger. A hooded man, dressed in black, came to meet him in his makeshift cell. The priest thought they were to escort him to his execution. But what happened changed the way he lived his detention thereafter. The hooded man saluted the priest and had a long and thorough conversation with him. When Mourad asked him why he was made captive, the masked man told the priest to see his detention as a “spiritual retreat.” So that’s what the priest started doing, diving deep into himself, rediscovering the riches of his own spiritual heritage.

“I really felt God’s presence at this meeting. Jihadists are usually quite aggressive. This person, it was exceptional. It felt as if God was speaking through him. When he told me to consider this captivity as a retreat, I think it truly was God speaking to me through him,” Father Mourad said.

He was able to escape the Islamic State on a motorcycle, with the help of a Muslim friend. But for security reasons, he won’t say more about how he did it.

Despite the hardships, Father Mourad holds no bitterness nor vengefulness. “(My abductors) tried to live Islam through the Quran and the Islamic law, but with an extremist and rigid mind. They’re using Islam and their political position as a way to react against the dictatorships of the Arabic world,” he said.

Father Mourad planned to return to his new ministry: working with refugees in northern Iraq.

Vaillancourt is editor-in-chief of Presence info.

NEXT: South Sudan leaders seek pope’s support as they work for peace