Some Iraqis hopeful, but aid groups have concerns about Mosul offensive 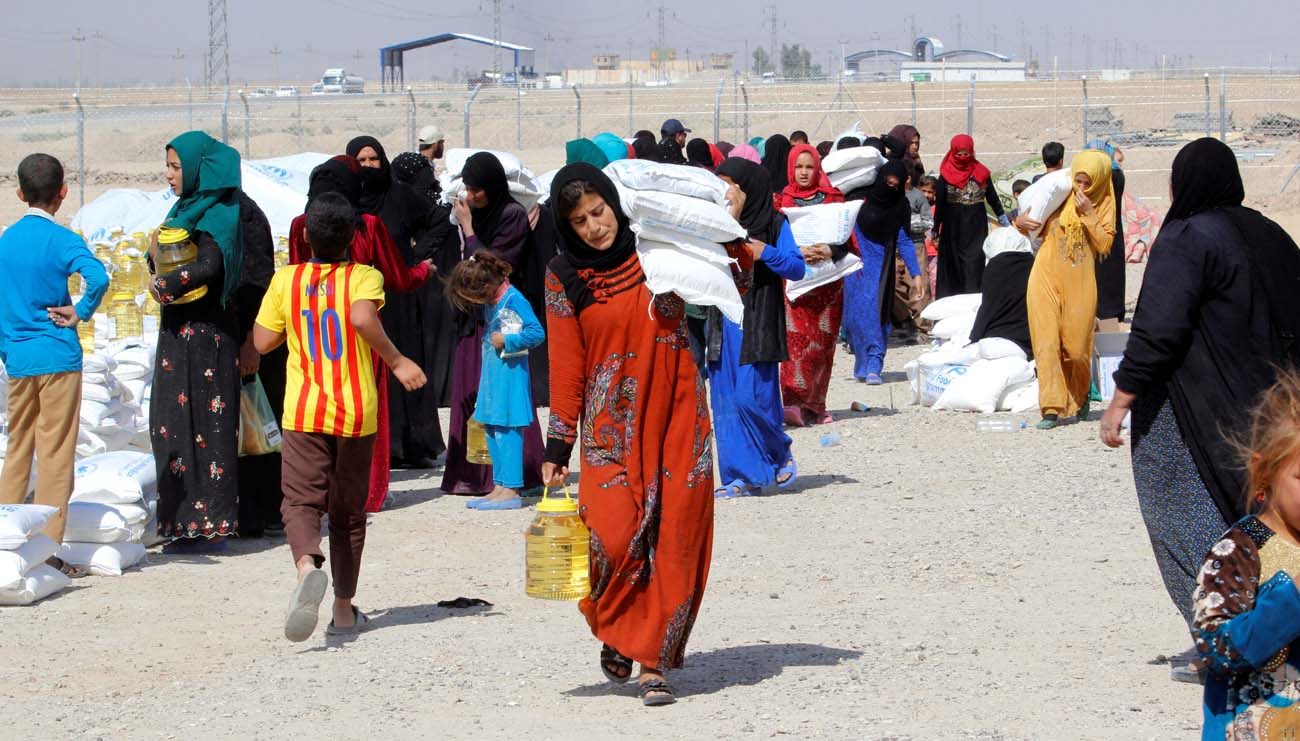 People who fled the Islamic State's strongholds of Hawija and Mosul receive aid Oct. 13 at a camp for displaced people in Daquq, Iraq. This summer, the U.N. said that as the Mosul crisis evolves, up to 13 million people throughout Iraq may need humanitarian aid by the year's end, far larger than the Syrian crisis. (CNS photo/Ako Rasheed, Reuters)

AMMAN, Jordan (CNS) — Iraqi Christians are cautiously welcoming the start of the battle for Mosul and the Ninevah Plain, their ancestral homeland of the past 14 centuries from which they were brutally driven out by the Islamic State group more than two years ago.

“They’ve been waiting for this day after being forced out in the summer of 2014, and many Christians have been living in very miserable conditions since. A number are eager to go back,” Father Emanuel Youkhana told the Catholic News Service. The archimandrite, a member of the Assyrian Church of the East, heads the Christian Aid Program Northern Iraq, CAPNI.

“Of course the military operation is just the first of several phases paving the way for their return. They will need security and other guarantees before they go back,” Father Youkhana said. “Also much reconstruction and rehabilitation of the region occupied the Islamic State militants will need to take place.”

This summer, the U.N. said that as the Mosul crisis evolves, up to 13 million people throughout Iraq may need humanitarian aid by the year’s end — far larger than the Syrian crisis. This would make the humanitarian operation in Mosul likely the single largest, most complex in the world in 2016.

“Everything is complicated. Still, we are waiting for what will happen after Daesh (the Arabic slang name for Islamic State), because maybe those criminals will be thrown out of Iraq, but the mentality remains in those who welcomed them,” Archbishop Mirkis said. “So how do we heal the country from this kind of fanaticism, which is very deep in society?”

The Kirkuk Archdiocese has taken in and ministered to hundreds of Iraqi Christians displaced by the brutal attacks of the Islamic State militants, who demanded Mosul residents leave their homes and businesses, convert to Islam or be killed.

Prior to the Iraqi military’s capitulation to a small group of Islamic State fighters in 2014, Mosul was inhabited by more than 2 million people. It’s believed that only about 1 million residents remain today. Some 130,000 have fled to other areas within Iraq, such as Kirkuk or Kurdistan. Thousands of others are being housed in neighboring countries, such as Jordan and Lebanon, while perhaps hundreds have been resettled or are awaiting resettlement in the U.S., Australia and Canada. Some live in cramped conditions in church basements. Caritas and other Catholic organizations have been working to help them.

International humanitarian organizations are warning that Iraqis, mainly Sunni Muslims, left in Mosul are “now in grave danger.” The Norwegian Refugee Council, Save the Children and others are urging the establishment of safe exit routes for civilians to flee the city.

“Unless safe routes to escape the fighting are established, many families will have no choice but to stay and risk being killed by crossfire or bombardment, trapped beyond the reach of humanitarian aid with little food or medical care,” said Aram Shakaram, Save the Children’s deputy country director in Iraq.

“Those that try to flee will be forced to navigate a city ringed with booby traps, snipers and hidden land mines. Without immediate action to ensure people can flee safely, we are likely to see bloodshed of civilians on a massive scale,” Shakaram warned.

The humanitarian groups criticize instructions from Iraq’s military urging inhabitants to hunker down inside their homes.

At best, this is impractical in a brutal urban conflict, the groups say. At worst, it risks civilian buildings being turned into military positions and families being used as human shields, they argue.

But even if people do manage to flee, they also face some uncertainty. Although aid agencies have been preparing for months, observers believe camps for the internally displaced are ready for perhaps some 60,000 people, and these camps could be overwhelmed within days.

The U.N. Office of the Coordinator for Humanitarian Affairs reported it is locating additional land for extra camps to be set up. It reported that construction of additional sites, with capacity for 250,000 people, is underway. Food rations for 220,000 families are ready for distribution, 143,000 sets of emergency household items are in stock; latrines and showers are being readied for dispatch and 240 tons of medication are available at distribution points. But funding toward a flash appeal has been insufficient to prepare fully for the worst-case scenario.

Even if the operation rids the area of Islamic State, Archbishop Mirkis said a number of Christians have serious concerns about returning home without iron-clad guarantees for their future safety.

“Who can give such assurances? Maybe the big countries. But those who suffered the most are the Yezidis. The Yezidis and all the minorities face the same problem. How can we have peace with neighbors who looted our houses?” he asked.

He also expressed concerned for civilians inside Mosul.

“All those children, elderly and civilians are caught like in a prison. We have to think about them too. We have to read the book of Jonah. It can explain many things to us,” the Catholic Chaldean leader said.