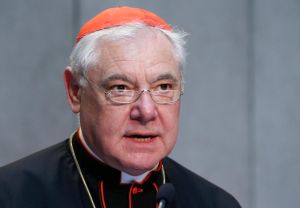 Cardinal Gerhard Muller, prefect of the Congregation for the Doctrine of the Faith, speaks during a news conference at the Vatican June 14. (CNS photo/Paul Haring)

VATICAN CITY (CNS) — Although with different personalities and different tones, the papacies of both Pope Francis and retired Pope Benedict XVI focus on proclaiming the Gospel in a world that seems to confuse truth and lies, goodness and evil, said Cardinal Gerhard Muller.

A new book, “Benedict and Francis: Successors of Peter at the Service of the Church,” available only in Italian, collects essays written by the cardinal, who was named prefect of the Congregation for the Doctrine of the Faith by Pope Benedict and continues in the role under Pope Francis.

A key sign that both popes see the Gospel as the answer to an increasingly confused humanity, Cardinal Muller wrote, is the repeated condemnations of what Pope Benedict defined as the “dictatorship of relativism” and what Pope Francis describes as the “globalization of indifference.”

“The challenge for the hierarchy and all members of the church consists in resisting these worldly infections and in curing the spiritual illnesses of our time,” the cardinal wrote.

The Italian Catholic newspaper Avvenire Oct. 21 published an excerpt of the book’s chapter on “Poverty: The Path of Evangelization in the Spirit of Pope Francis.”

“The desire expressed by Pope Benedict XVI that the church orient itself not by the world but by the Gospel has been taken up by Pope Francis in ‘Evangelii Gaudium,’ when he writes, ‘I want a church which is poor and for the poor,'” the cardinal wrote.

“The ‘no’ to spiritual worldliness,” the cardinal said, “is countered by a ‘yes’ to the challenge of a missionary spirituality,” one which sees material things as useful for living, but not as a goal or a primary good.

“A disciple of Christ must not bind his heart to ephemeral wealth, fleeting power and worldly honors,” but to Christ, the cardinal said.

In seeking guidance from the Gospel and not the world’s measure of things, the church embraces both material and spiritual poverty, he said. It seeks to follow Christ, who emptied himself to save humanity.

PREVIOUS: For vocations, one must go out, listen, call, pope says

NEXT: Christian thinkers call for a politics of ‘localism’