Unity and division: Ecumenical realities on display at papal Mass 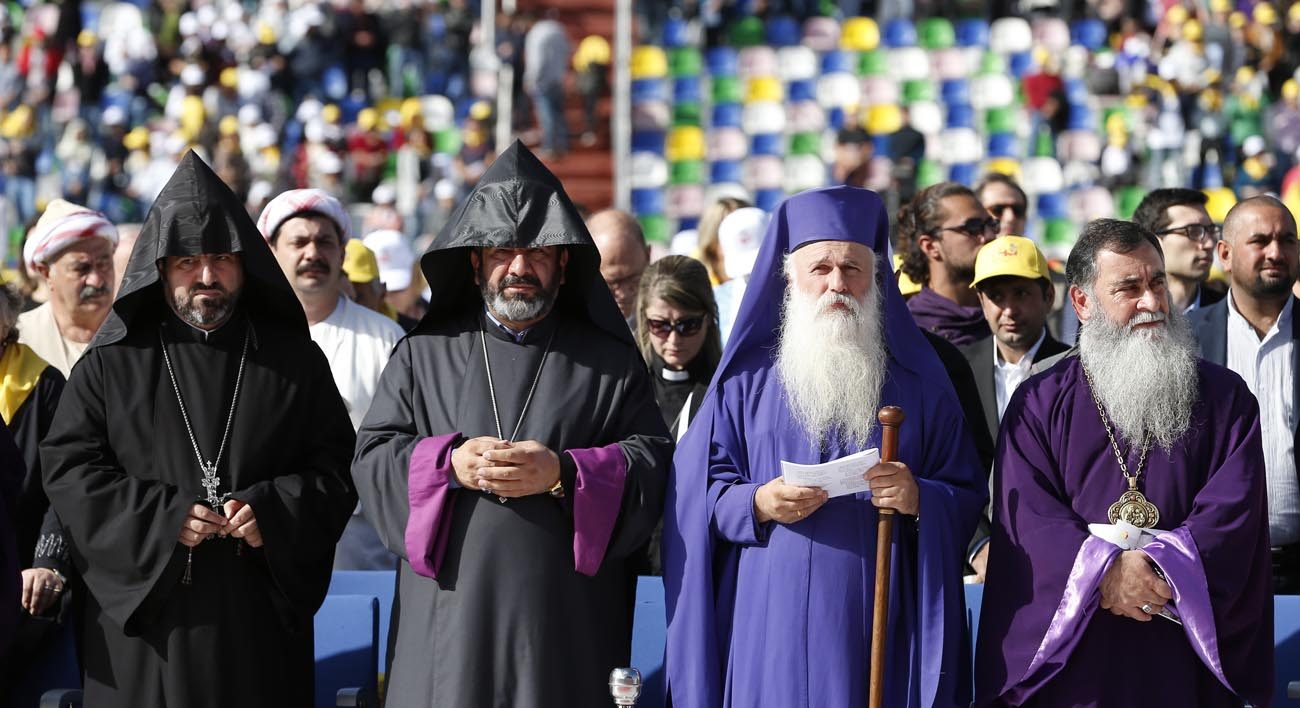 TBILISI, Georgia (CNS) — At a papal Mass focused on two female saints, the longing for Christian unity and the painful reality of Christian division were strong undertones.

Celebrating Mass Oct. 1, the feast of St. Therese of Lisieux, Pope Francis also praised St. Nino, a woman who evangelized Georgia in the fourth century, is recognized as a saint by the Catholic Church and hailed by the Georgian Orthodox as “equal to the Apostles and the enlightener of Georgia.”

A few thousand people — including many expatriates living and working in Georgia — attended the morning Mass, which was celebrated in a Tbilisi soccer stadium.

While the official theme of the pope’s visit to Georgia was “Pax vobis” — “Peace be with you” — the caps and scarves handed out at the Mass and worn by most in the crowd said, “Ut unum sint,” the Latin for “that all may be one.”

The vast majority of Georgians are members of the Orthodox Church. Catholics, including Armenians, Chaldeans and members of the Latin-rite church, account for only about 2 percent of the population.

Vatican officials and people involved in Catholic-Orthodox relations had hoped that Georgian Orthodox Ilia II would send an official delegation to the Mass despite rules preventing the church’s clergy from attending a non-Orthodox liturgy. In the end, however, no Georgian Orthodox bishops were present.

The patriarchate had issued a statement Sept. 28 saying that Orthodox attendance at a Catholic liturgy was not possible “as long as dogmatic differences exist.”

“We accept their decision,” said Greg Burke, the Vatican spokesman, who also noted that Georgian President Giorgi Margvelashvili, a member of the Orthodox Church, was at the liturgy, as were several Armenian Orthodox bishops.

Members of the crowd, though, represented a wide variety of different Christian denominations, as did the choir, which melded singers from the choirs of the Catholic parishes and the Armenian Orthodox, Baptist, Lutheran and Pentecostal churches.

Cliff Reed, an Episcopalian who works at the U.S. embassy in Tbilisi, brought his family to the Mass. “Everyone I talked to — Georgians or not — asked, ‘Are you going?’ I said, ‘Yes.’ Some asked, ‘Are you Catholic?’ I said, ‘No, but it’s the pope.'”

In his homily, Pope Francis focused on the feast of St. Therese and a line from Isaiah from the first reading at Mass, “As a mother comforts her child, so I will comfort you.”

The experience of loving, faithful mothers and grandmothers, the pope said, helps believers understand the scriptural description of God. “As a mother takes upon herself the burdens and weariness of her children, so too does God take upon himself our sins and troubles,” he said.

“Beyond any evil we are capable of,” the pope said, “we always remain his children; he wants to take us in his arms, protect us and free us from harm and evil.”

The church, too, is called to be a mother, Pope Francis told the people. But if the church is all the baptized together, then individuals must ask themselves how they can ensure that the church is “the house of the consolation of God.”

“Do I know how to welcome others as guests and console those whom I see tired and disillusioned?” he asked.

Catholics cannot allow their parishes or the church to become a “closed ecclesial micro-environment,” the pope said, but must have the courage to reach out to others with humility and respect.

Humility is one of the keys to Christian life and a virtue taught simply by St. Therese of Lisieux, he said. “God is not known through grand ideas and extensive study, but rather through the littleness of a humble and trusting heart.”

Being a child of God means living simply, relying on God and delighting in the surprises God has in store, he said.

“Blessed are those Christian communities who live this authentic Gospel simplicity! Poor in means, they are rich in God,” Pope Francis said. “Blessed are the shepherds who do not ride the logic of worldly success, but follow the law of love: welcoming, listening, serving.”