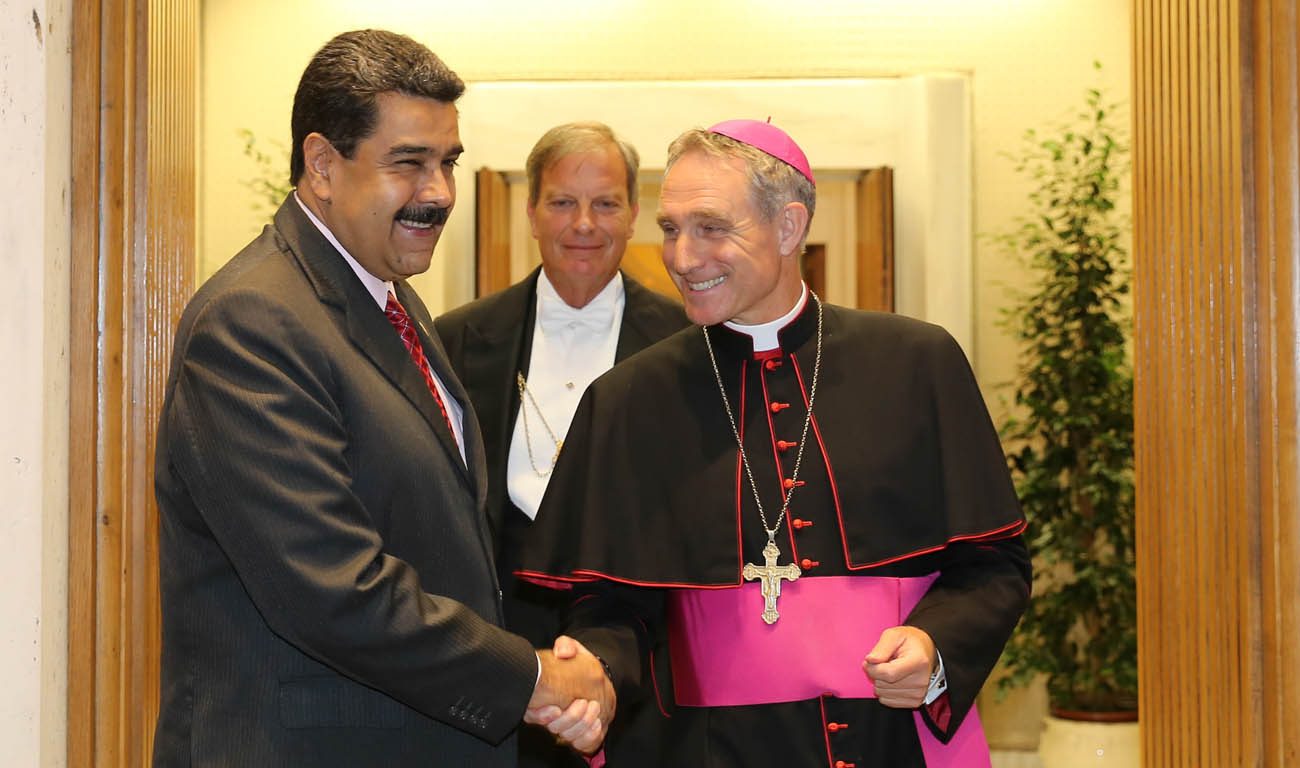 Venezuelan President Nicolas Maduro is greeted by Archbishop Georg Ganswein, prefect of the papal household, prior to an Oct. 24 private meeting between Maduro and Pope Francis at the Vatican. (CNS photo/Miraflores Palace handout via EPA)

The Venezuelan leader, who was returning from a state visit to the Middle East, made an unannounced stop at the Vatican Oct. 24 to meet with the pope.

The meeting, the Vatican said, “took place within the framework of the worrisome political, social and economic situation that the country is going through — a situation that is having serious repercussions in the daily lives of the entire population.”

Tensions in the country increased after electoral authorities in the country suspended a referendum Oct. 20 that sought to remove Maduro in the midst of an economic crisis that has left thousands without food or basic necessities.

The Vatican said the pope “has at heart the welfare of all Venezuelans” and “desired to continue to offer his contribution” to resolving the crisis.

The meeting between the pope and Maduro came on the heels of an announcement that government and opposition parties have agreed to a Vatican-mediated dialogue.

Swiss Archbishop Emil Paul Tscherrig, the apostolic nuncio to Argentina whom Latin American media refer to as the papal envoy to the Venezuela crisis talks, announced in Caracas that formal talks between the government and opposition leaders would begin Oct. 30 at Isla Margarita.

Archbishop Tscherrig said that the dialogue will be “under the auspices of the Union of South American Nations” and will be “accompanied by the Holy See” as well as by three former heads of state: Jose Luis Rodriguez Zapatero of Spain, Martin Torrijos of Panama, and Leonel Fernandez of the Dominican Republic.

Although Jesus Torrealba, secretary of Venezuela’s coalition of opposition parties, remained cautious about the agreement, some members of the opposition expressed distrust over the recently announced meeting and called for Maduro’s ouster.

Henrique Capriles, governor of Miranda and one of President Maduro’s strongest opponents, said the recent suspension of the referendum amounted to a “state-sponsored coup” and called on Venezuelans to take to the streets.

He also expressed his doubts regarding Maduro’s meeting with Pope Francis.

“Beware, Your Holiness; know that we are dealing with the devil. Nicolas Maduro is capable of lying even to the pope,” he said in a video message posted to the Periscope social media site. “The coup has not ended here.”