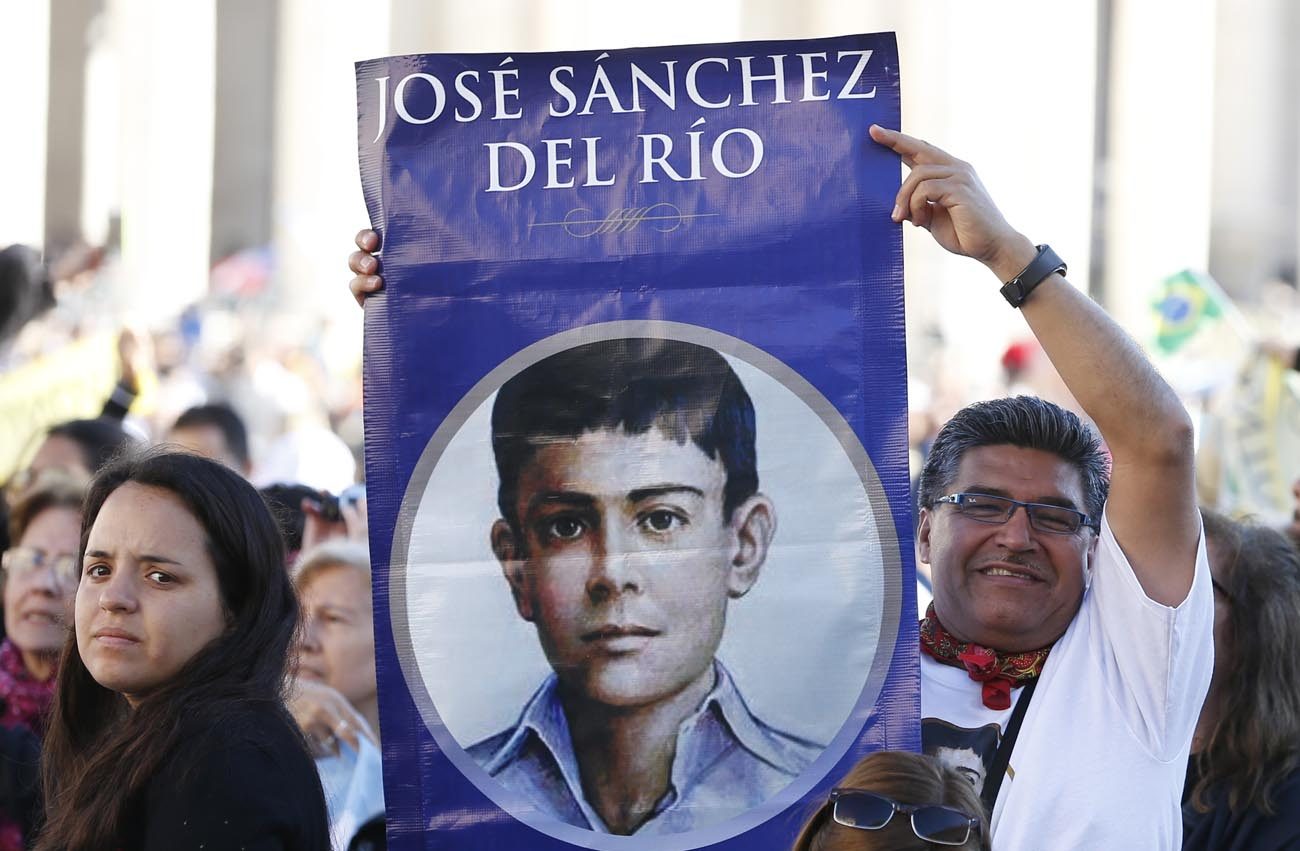 A man holds an image of new Mexican St. Jose Sanchez del Rio, who was martyred at the age of 14 in 1928, before the canonization Mass for seven new saints celebrated by Pope Francis in St. Peter's Square at the Vatican Oct. 16. (CNS photo/Paul Haring)

ROME (CNS) — The heroism of Mexico’s newest saint, St. Jose Sanchez del Rio, should embolden the nation’s priests to continue their ministry with trust in God, said the vice postulator of the young saint’s cause.

For priests in Mexico, especially those who denounce the activity of drug traffickers and find themselves targeted for attacks, the life of St. Jose is a call to place their “full trust in God,” Antonio Berumen, the vice postulator, told Catholic News Service Oct. 14.

“There comes a time in which, evidently, we must live through difficult times, but in the end Jose’s message is ‘I trust in you,'” he said. “It is complete trust in God and having the assurance that there is someone who acts and continues to act in the lives of men and women.”

As Pope Francis declared seven new saints Oct. 16, one of the banners hanging on the facade of St. Peter’s Basilica showed a young boy dressed in blue jeans and a white shirt.

In his hands, the 14-year-old St. Jose holds a rosary and a palm branch, symbols of his unshakeable faith and martyrdom. A trail of blood is seen at his feet along with a single bullet, symbolic of the torture and the manner of death he endured at the hands of his captors.

The martyrdom of St. Jose Sanchez del Rio, who died in 1928 during a government crackdown on Catholics, takes on a new meaning today amid violence in Mexico.

The murder of three priests in September was the latest in a disturbing trend of attacks against priests throughout the country. According to the Catholic Multimedia Center, 15 priests have been murdered in Mexico in the last four years.

Although most people believe the murders were committed by drug traffickers who wanted to send out a message to those who oppose them, government officials are facing criticism not only for downplaying the seriousness and frequency of the attacks but also for their attempts to blame the victims for their own deaths.

The recent death of Father Jose Alfredo Lopez Guillen, a well-liked priest in Michoacan who was abducted and found a week later with five gunshot wounds to the stomach, brought attention to the ferocity of drug traffickers willing to murder members of the clergy who spoke out against them.

However, Gov. Silvano Aureoles Conejo of Michoacan claimed the priest was spotted in a surveillance video at a local hotel with a young boy, implying that he may have been a pedophile and died because of his actions.

But, calling the governor “irresponsible,” the mother of the child on the video immediately filed a complaint, stating that the video shows her son with his father, not with the priest. The attempt to discredit the priest’s reputation also drew the ire of local church officials who demanded an apology from the governor.

Father Lopez’s parishioners in Janamuato also rushed to the late priest’s defense and said he devoted his priestly life to helping youths in the town overcome drug and alcohol addiction, an action that most likely angered local drug traffickers.

Auxiliary Bishop Jaime Calderon Calderon of Zamora in Michoacan told journalists in Rome Oct. 14 that the death of priests like Father Lopez continue the legacy of St. Jose Sanchez del Rio, who in the face of certain death continued to announce the truth of the Gospel.

“With ever greater conviction, I see in the behavior of our priests that what we bring can forge new relationships that will build a more peaceful Mexico with justice, truth, righteousness, but above all, with love,” Bishop Calderon said.

NEXT: Pope canonizes seven saints who ‘fought the good fight of faith’