Yes, there are faithful Millennials who stay Catholic at college

I first came to know Aurora Griffin about a year ago through a mutual friend. In the meantime, she’s been quite busy. How else would you describe completing your graduate degree from Oxford and writing your first book?

To describe Aurora as a “go-getter” is a bit of an understatement. She went to Oxford to study philosophy and theology on a Rhodes Scholarship. Before that, she completed her undergraduate work at Harvard where she was president of the Catholic Student Association and a member of Phi Beta Kappa.

Recently, she graciously answered a few questions from Seminarian Casual (the blog by the community of St. Charles Borromeo Seminary) about the impetus for her new book, “How I Stayed Catholic at Harvard” (available here from Ignatius Press).

This book can be a boost to those families concerned about their children drifting away from their faith at secular (or Catholic!) colleges. It can also inspire students to engage with their Newman Center or campus ministry program in a fresh way. Finally, it serves as a reminder of the great work being done by campus ministers at schools across the country.

Her insights reveal something many Catholic students across the country have come to understand: that one of the few true “safe spaces” on a college campus – Harvard or anywhere else – is among fellow believers, especially at Mass. 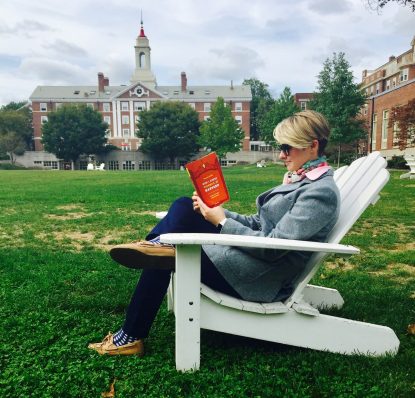 Aurora Griffin, author of “How I Stayed Catholic at Harvard,” relaxes on the lawn at the famed Ivy League university.

Seminarian Casual: What prompted you to write this book? How did the idea first develop?

Aurora Griffin: This book was definitely the work of the Holy Spirit. I was never planning to write a book about my experiences at Harvard, and then there I was, nearly a year after graduation, on Easter 2015. The idea came to me all at once — the concept, the title, the publisher, Peter Kreeft writing the foreword. It was all there. I ran to my computer to start writing it all down, and came up with 37 of the 40 tips.

When I pause to reflect on the origins of the book, I am assured that this is God’s project through and through. It’s not about me or Harvard or any of that: He is using it to encourage students and their parents. I am blessed to be a part of it.

SC: When you first decided to attend Harvard, were you concerned about how you would practice your faith? Was that on your mind at that point?

AG: I was very fortunate insofar as I was raised in a wonderful Catholic family. My dad taught me from the Baltimore Catechism when I was a child, so I had great formation. I also went to a Protestant high school, which was a blessing in many ways. For one thing, it gave me practice in apologetics and discussing the teachings of the Church with people who did not necessarily agree. Even more importantly, my Protestant friends and teachers showed me that a personal relationship with Christ was the most important thing in the world.

Everyone – cradle Catholic and convert alike – has a moment in which he claims the faith for his own. That happened for me in high school, so by the time I got to college, I knew I was serious about practicing the faith. One of the first things I did was find St. Paul Parish in Harvard Square and identify the weekday Mass times. I started going immediately, and met some of my best friends at morning Mass.

SC: What are some of your favorite memories of the Catholic community at Harvard?

AG: So many to choose from, mostly from a group of wonderful “first” events. The cocktail party on the night that the Daughters of Isabella (a Catholic sorority) launched at Harvard, with the Knights of Columbus. The first holy hour, “Totus Tuesday,” which became a weekly devotion. The first “Theology by the Slice,” a casual group that met to talk about God and eat pizza.

My friends and I were truly blessed to be part of starting a number of traditions in the Catholic community at Harvard. When I went back to campus for the launch of the book a few weeks ago, I’m happy to say that they were all still going strong.

SC: Sometimes Catholics who have good experiences of college campus ministry have trouble adjusting to life after college in new environments. What has your experience been?

AG: Well, I cheated a bit here in that I went to graduate school at Oxford, so I was immediately back in a “college” environment after leaving Harvard. Oxford turned out to be a wonderful place to be Catholic as well. Between the Oratorians, Benedictines, Jesuits and Dominicans, there are many people of strong faith there. However, since I finished my degree at Oxford in July, I have experienced this problem more acutely.

In college people can set their own schedules, so it’s easy to organize events. Out in the real world, you see people less, whether for Catholic activities or running clubs. However, I have personally found great continuity in the sacraments, especially in the Mass. No matter where we are, the Eucharist can sustain us, and God is truly enough to satisfy our hearts.

SC: I can speak for many of my brother seminarians in saying that ministry to young adults is something we see as critically important for the Church. What are some of the qualities you think are most important for a priest working with college students and young adults?

AG: It seems to me that priests who want to work effectively among young people have to strike a difficult balance between speaking the truth and being merciful. (Pope) Benedict XVI wrote about speaking the truth in love, “Caritas in Veritate.”

On the one hand, when priests say that Catholics are just like everyone else (with the implication that morality is relative, or irrelevant), that turns young people off. Why should they bother being Catholic if being Catholic is the same as not? It’s much more effective to tell people the Truth: what you do matters, and sometimes it’s hard to do the right thing. We cannot change the world to adapt to our desires: we must rise to the occasion and change ourselves.

On the other hand, if the bar is set too high, it is easy to become discouraged. It takes a special kind of responsiveness to the Holy Spirit to know whether the person in front of you needs a dose of truth or of gentleness from the Divine Physician.

I pray that our priests may be granted the ability to see what young people need, and the courage and humility to deliver it.

SC: Various studies have shown the decline of religious practice among Millennials, but particularly Catholic Millennials. Why do you think that is? Do you see any signs of hope in this area?

AG: Actually, despite these numbers, I am very optimistic about the condition of faith among Millennials. I say it every chance I get: we are few, but we are strong. The numbers are declining, as is general church attendance, but to me, that mostly means that people are not there unless they really want to be. God would have spared Sodom for 10 righteous men, and Jesus was able to evangelize the world with 12 Apostles. We have a lot more than that!

SC: Finally, what are the next steps for you personally? Any future book ideas?

AG: I don’t have any books planned for the immediate future, but the first book was such a surprise to me that I can’t rule it out! I have some ideas, but for now I’m focusing on articles for publications like The Catholic Herald and Catholic World Report, and have a blog in the works. Stay tuned, and if you do see my writing somewhere, please remember to pray for me!

PREVIOUS: Making our time, even in our busyness, God’s time

NEXT: This year we need the self-denial of Advent more than ever